A general classification of swimming modes or types among fishes has been developed, building on the work of Breder and Webb.

A general  classification of swimming modes or types among fishes has been developed, building on the work of Breder(1926), Gray (1968), Lindsey (1978), and Webb (1984;Webb & Blake 1985). The chief characteristics of the different types are how much of and which parts of the body are involved in propulsion and whether the body or the fins undulate or oscillate. Undulation involves sinusoidal waves passing down the body or a fin or fins; oscillation involves a structure that moves back and forth (Table 8.1). About one dozen general types are recognized: anguilliform, subcarangiform, carangiform, modified carangiform(=thunniform), ostraciiform, tetraodontiform, balistiform,rajiform, amiiform, gymnotiform, and labriform; some of these are additionally subdivided. 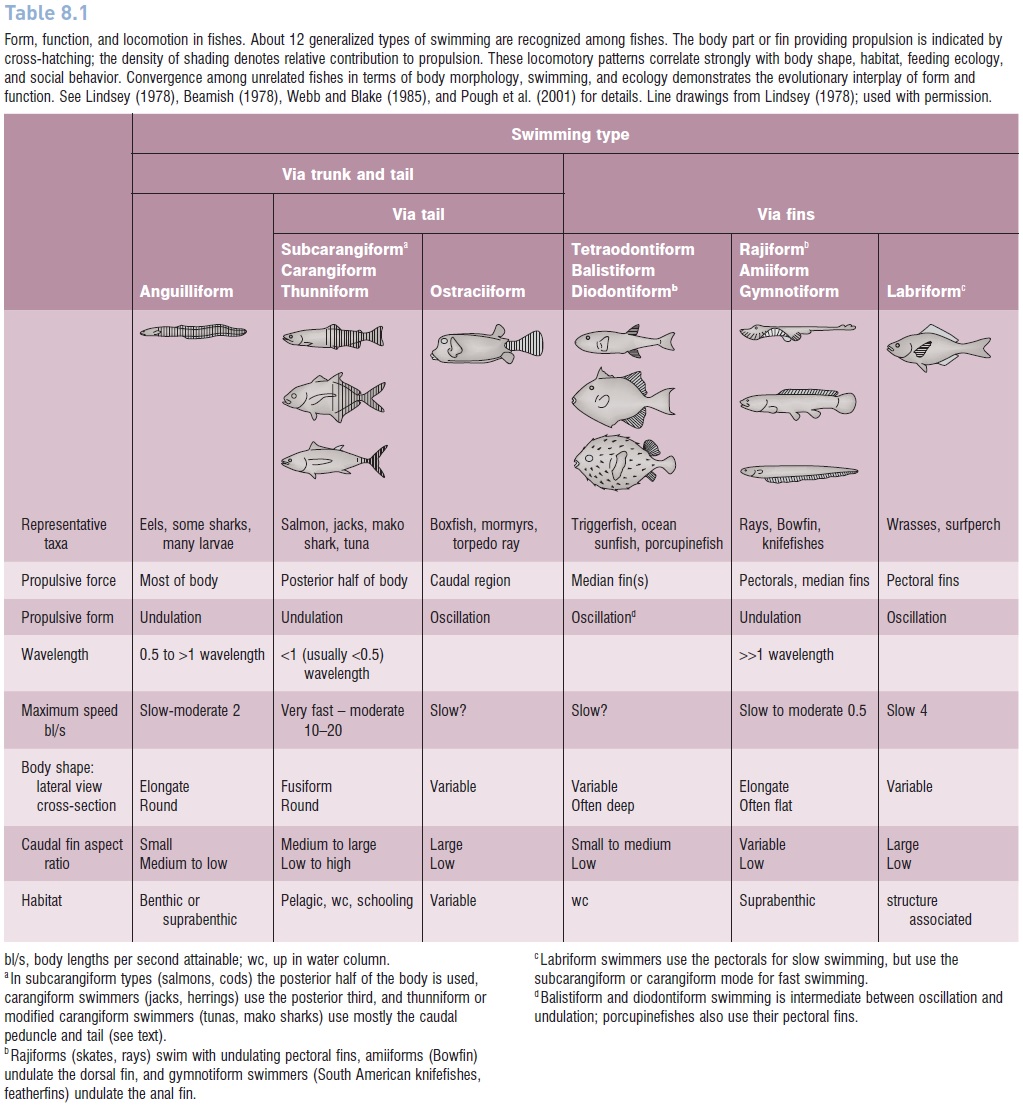 Form, function, and locomotion in fishes. About 12 generalized types of swimming are recognized among fishes. The body part or fin providing propulsion is indicated by cross hatching; the density of shading denotes relative contribution to propulsion. These locomotory patterns correlate strongly with body shape, habitat, feeding ecology, and social behavior. Convergence among unrelated fishes in terms of body morphology, swimming, and ecology demonstrates the evolutionary interplay of form and function. See Lindsey (1978), Beamish (1978), Webb and Blake (1985), and Pough et al. (2001) for details. Line drawings from Lindsey (1978); used with permission.

The names apply to the basic swimming mode of particular orders and families, although unrelated taxa may display the same mode, and many fish use different modes at different velocities. The first four types involve sinusoidal undulations of the body. Anguilliform swimming, seen in most eels, dogfishes, other elongate sharks, and many larvae occurs in fishes with very flexible bodies that are bent into at least one-half ofa sine wave when photographed from the dorsal view(Table 8.1). All but the head contributes to the propulsive force (Muller et al. 2001). As a wave proceedsposteriorly it increases in amplitude. The speed (frequency) of the wave remains constant as it passes down the body and always exceeds the speed of forward movement of the fish because of drag and because of energy lost to reactive forces that are not directed forward (see above). To swim faster, faster waves must be produced. Anguilliform swimmers are comparatively slow because of their relatively long bodies and involvement of anterior regions in propulsion; the same segments that push back on the water also waste energy by pushing laterally and also create drag because water pushes on these bent sections as the fish moves forward. Anguilliform swimming has its compensating advantages, includinga greater ability to move through dense vegetation and sediments and to swim backwards (D’Aout & Aerts 1999).Anguilliform swimming in larval fishes, including such species as herrings that use carangiform swimming as adults, probably occurs because the skeleton of early larvae is unossified and the fish is exceedingly flexible and anatomically constrained from employing other modes (see Larval behavior and physiology).

To get around the self-braking inherent during anguilliform swimming, faster swimming fishes involve only posterior segments of the body in wave generation, using ligaments to transfer force from anterior body musculatureto the caudal region. The progression of types from subcarangiform(trout, cod) through carangiform (jacks, herrings)to modified carangiform or thunniform (mackerel sharks, billfishes, tunas) entails increasing involvement of the tail and decreasing involvement of the anterior body in swimming. One major advance in the carangiform andthunniform swimmers is the existence of a functional hinge that connects the tail to the caudal peduncle. This hinged coupling allows the fish to maintain its tail at an ideal attack angle of 10–20° through much of the power stroke. In anguilliform and subcarangiform swimmers, this angle changes constantly as the tail sweeps back and forth, producing less thrust at low angles and creating more drag at greater angles.

Thunniform swimmers also typically have a tail that originates from a narrow peduncle (=narrow necking) thatis often dorsoventrally depressed and may even have lateral keels that streamline it during side-to-side motion. Narrow necking creates an overall more streamlined shape to the body and also reduces viscous drag and lateral resistance ina region of the body where they tend to be highest. The tail itself is stiff and sickle-shaped, being very narrow while quite tall. A tail with such a large height : width ratio, referred to as a high aspect ratio tail, experiences minimal drag and is ideal for sustained swimming: the shape reduces viscous drag by reducing surface area and reduces inertial drag by having pointed tips which produce minimal vortices at their tips. The efficiency of the system is increased by tendons that run around joints in the peduncle region and insert on the tail, the joints serving as pulleys that increase the pulling power of the muscle–tendon network. The thunniform mode of propulsion, involving a streamlined shape, narrow necked and keeled peduncle, and highaspect ratio tail, has evolved convergently in several fast swimming,pelagic predators, including mackerel sharks, tunas, and billfishes, as well as porpoises and dolphins and the extinct reptilian ichthyosaurs. The fish and mammalian groups at least are also endothermic to some degree(Light hill 1969; Lindsey 1978; Pough et al. 2001). Higher speed, sustained swimming in the mackerel sharks and tunas is also made possible by the large masses of red muscle along the fish’s sides (see  Whitemuscle versus red muscle). Location of the red muscle close to the fish’s spine allows the body to remain fairly rigid and also permits the retention of heat generated by muscle contraction. Hence thunniform swimming and endothermy aretightly linked.

Low aspect ratio, broad, flexible tails, such as those found in subcarangiform minnows, salmons, pikes, cods, and barracudas are better suited for rapid acceleration froma dead start and can also aid during hovering by passing undulations down their posterior edge. Intrinsic muscles associated with the tail in low aspect ratio species help control its shape. Rainbow Trout are able to increase the depth and hence produce a higher aspect ratio tail during high-speed swimming. Fast start predators, such as garpikes, and barracudas, hover in the water column and then art rapidly at prey. These unrelated fishes have converged on a body shape that concentrates the propulsive elements in the posterior portion of the body: the dorsal and anal fins are large and placed far to the posterior, the caudal peduncle is deep, and the tail has a relatively high aspect ratio. Maximum thrust from a high-amplitude wave concentrated in the tail region allows for rapid accelerationfrom a standing start (see Fig. 19.1).

Ostraciiform swimming, as seen in boxfishes and torpedo rays, is extreme in that only the tail is moved back and forth while the body is held rigid; the side-to-side movement of the tail is more an oscillation than an undulation. In theweakly electric elephant fishes, body muscles pull on tendons that run back around bones in the caudal peduncle region and insert on the tail, causing the fish to swim with jerky tail beats. Such an arrangement is thunniform in anatomy but more ostraciiform in function. Weakly electric fishes, such as the elephant fishes and South American knifefishes mentioned below, often have devices for keeping their bodies straight while swimming. This relative inflexibility probably minimizes distortion of the electric field they create around themselves (see  Electroreception).

Ostraciid boxfishes carry this type of swimming to its extreme, having a rigid dermal covering that extends backto the peduncle area. Although a rigid, boxlike body propelled by a caudal fin seems an ungainly, even unlikely, means of getting around a coral reef, these active swimmers are elegantly constructed for dealing with water that flows past their bodies as they move or encounter currents. Thefl at surfaces and angular shelves and projections of the boxlike carapace generate vortices that counteract pitching and yawing that result from water flow, without active correction by fins, tail, or gas bladder. In fact, all of the “unfishlike”morphological features of the boxfish’s box contribute to hydrodynamic stability (Bartol et al. 2005) (Fig. 8.2). 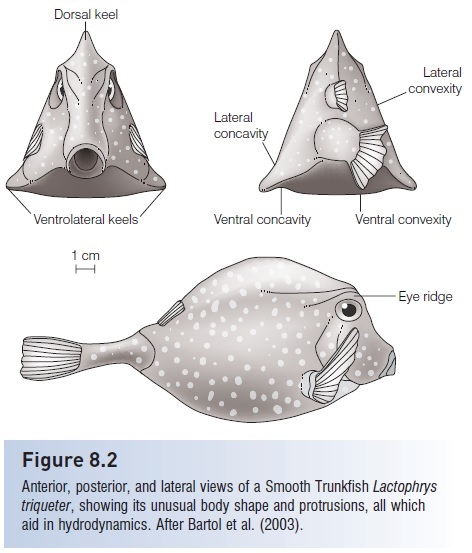 Anterior, posterior, and lateral views of a Smooth Trunkfish Lactophrystriqueter, showing its unusual body shape and protrusions, all whichaid in hydrodynamics. After Bartol et al. (2003).

Raj form and related swimming modes are slow but allow for precise hovering, maneuvering, and backing. The frequencywith which waves pass along a fin can be very high, reaching 70 Hz in the dorsal fin of seahorses. Labriform swimmers (chimaeras, surf perches, wrasses, parrotfishes,surgeonfishes) row their pectoral fins, pushing back with the broad blade, then feathering it in the recovery phase.As some negative lift is generated during the recovery phase, these fish often give the impression of bouncing slightly as they move through the water. If rapid acceleration or sustained fast swimming is needed, labriform swimmers, as well as many other fin-based locomotors, shift tocarangiform locomotion.

Three final aspects of locomotory types deserve mention. First, the distinctiveness of the different locomotory types suggests that they are specializations, and specialization for one function usually produces compromises in other functions. Fishes that specialize in efficient slow swimming or precise maneuvering usually employ undulating or oscillating median fins. The long fin bases necessary for such propulsion(e.g., Bowfin, knife fishes, pipefishes, cutlass fishes)require a long body, which evolves at a cost in high-speed, steady swimming. Low-speed maneuverability can also be achieved with a highly compressed (laterally flattened),short body that facilitates pivoting, as found in many fish that live in geometrically complex environments such as coral reefs or vegetation beds (e.g., freshwater sunfishes, angelfishes, butterflyfishes, cichlids, surf perches, rabbitfishes; see Drucker & Lauder 2001). These fishes typically have expanded median and paired fins that are distributed around the center of mass of the body and can act independently to achieve precise, transient thrusts, a useful ability when feeding on attached algae or on invertebrates that are hiding in cracks and crevices. But a short, compressed body means reduced muscle mass and poor streamlining, whereas large fins increase drag. Again, such fishes achieve maneuverability but sacrifice rapid starts and sustained cruising. Relatively poor fast-start performance maybe compensated for by deep bodies and stiff spines, which make these fishes difficult to swallow (see Discouraging capture and handling); they also typically live close to shelter. At the other extreme, thunniform swimmers havestreamlined bodies, large anterior muscle masses, and stiff pectoral and caudal fins that are extremely hydrodynamic foils. They trade-off exceptional cruising ability against an inability to maneuver at slow speeds.Although specialists among body types can be identified, optimal design for one trait – sustained cruising, rapid acceleration, or maneuverability – tends to reduce ability in the other traits. Because most fishes must cruise to get from place to place, must accelerate and maneuver to eat and avoid being eaten, “the majority of fishes are locomotor generalists rather than locomotor specialists” (Webb 1984, p. 82).

Second, this generalist strategy means that few fishes use only one swimming mode. Many fishes switch betweenmodes depending on whether fast or slow swimming or hovering is needed. In addition, most fishes have median fins that can be erected or depressed, adding a dynamic quality to their locomotion. A Largemouth Bass can erect its first dorsal and anal fins to gain thrust during a fast-start attack, then depress these fins while chasing a prey fish to reduce drag, then erect them to aid in rapid maneuvering. Most groups, with the exception of the thunniform swimmers, are capable of hovering in mid water by sculling with their pectoral fins or by passing waves vertically along the caudal fin. When hovering, some forward thrust is generated by water exhaled from the opercula’s; this force is countered by pectoral sculling. The fin movement involved in hovering may be difficult to detect, both by human observers and potential prey, because fishes that use these techniques often possess transparent pectoral fins.

Third, not all fishes fit neatly into one of these categories, and many additional categories can and have been erected to accommodate variations among taxa (see Lindsey1978, Webb & Blake 1985, Videler 1993, and Blake 2004for more complete and alternative categorizations, and see below on sharks).