Molecular biology- is the study of the structure, function & makeup of the molecular building blocks of life.

Molecular biology- is the study of the structure, function & makeup of the molecular building blocks of life. It focuses on the interactions between the various system of a cell, including the interrelationship of DNA, RNA & Protein synthesis &how these interaction are regulated. Bioscience, Molecular biology closely interrelate with the fields of Biochemistry, Genetics & Cell biology.

Molecular biology is a specialised branch of biochemistry, the study of the chemistry of molecules which are specifically connected to living processes. Importance to molecular biology are the nucleicacids (DNA and RNA) and the proteins which are constructed using the genetic instructions encoded in those molecules. Other biomolecules, such as carbohydrates and lipids may also be studied for the interactions they have with nucleic acids and proteins. Molecular biology is often separated from the field of cell biology, which concentrates on cellular structures (organelles and the like), molecular pathways within cells and cell life cycles.

Genetic Engineering is the act of modifying the genetic makeup of an organism. Modification can be generated by methods such as gene therapy, nuclear transplantation, transfection of synthetic chromosome or viral insertion.

The manipulation of genetic make up of living cells by inserting desired genes through a DNA vector, is the genetic engineering. The gene is a small piece of DNA that encodes for a specific protein. The gene is inserted into a `vector DNA so that a new combination of vector DNA is formed. The DNA formed by joining DNA segments of two different organisms is called recombinant DNA. The organism whose genetic make up is manipulated using recombinant DNA technique, is called genetically manipulated organism (GMO).

Genetic engineering has many application in agriculture, animal science, industry and medicines (Figure 1.3). 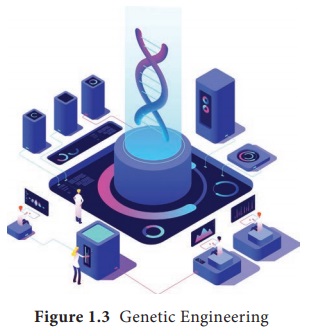 Organism genome has been engineered in the laboratory in order to favour the expression of desired physiological traits or the production of desired biological products. In conventional livestock production, crop farming, and even pet breeding, it has long been the practice to breed select individuals of a species in order to produce offspring that have desirable traits. In genetic modification, however, recombinant genetic technologies are employed to produce organisms whose genomes have been precisely altered at the molecular level, usually by the inclusion of genes from unrelated species of organisms that code for traits that would not be obtained easily through conventional selective breeding.

GMOs are produced through using scientific methods that include recombinant DNA technology and reproductive cloning. In reproductive cloning, a nucleus is extracted from a cell of the individual to be cloned and is inserted into the enucleated cytoplasm of a host egg. The process results in the generation of an off spring that is genetically identical to the donor individual. The first animal produced by means of this cloning technique with a nucleus from an adult donor cell (as opposed to a donor embryo) was a sheep named Dolly, born in 1996. Since then a number of other animals, including pigs, horses, and dogs, have been generated by reproductive cloning technology. Recombinant DNA technology, on the other hand, involves the insertion of one or more individual genes from an organism of one species into the DNA (deoxyribonucleic acid) of another. Whole-genome replacement, involving the transplantation of one bacterial genome into the “cell body,” or cytoplasm, of another microorganism, has been reported, although this technology is still limited to basic scientific applications.