Aquatic microbiology is the study of microorganisms and microbial communities in water environments.

Aquatic microbiology is the study of microorganisms and microbial communities in water environments. Aquatic environments occupy more than 70% of the earth’s surface. Water is essential for life and one of the most important natural resource. Thus, protection and preservation of aquatic environments are vital for the continuation of life. There are two kinds of water found on earth:

Salt water contains a significant level of dissolved salts. The major bodies of salt water are oceans, seas, estuaries, and certain salt water lakes. Average salinity of ocean is 3.5 grams per 100 grams of water. The pH of salt water remains relatively constant at a range of 8.3 to 8.5. The temperature of seawater fluctuates depending on location, season and depth.

A partly enclosed coastal body of water in which fresh water is mixed with seawater is called an estuary. As a consequence of this geographical location, estuaries are of salinity levels that range from less than 0.5 to 2.5 grams of dissolved salts per 100 grams of water at their mouths, where the water flows into the marine environment. Estuaries are ecologically sensitive environments and serve as habitats for fish and wide variety of marine life. There is an increasing concern about the quality of life in estuaries seriously damaged by human impact, including over development and pollution from industrial and waste water discharges. The bacterial population in estuaries consists of Pseudomonas, Flavobacterium, and Vibrio, as well as enteric organisms. The quantities and types of organisms vary, and depend on the tide, rainfall, salinity, depth and temperature. Most of the bacteria found in water runoff come from animal and fowl fecal matter deposited on the ground. 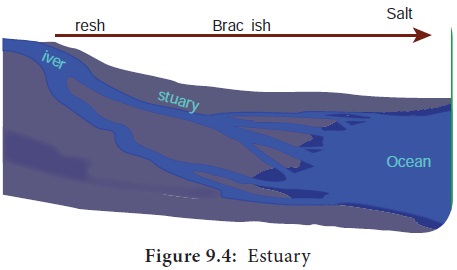 Sometimes overflow from sewage systems contributes to these higher number of bacteria in the water. Microbiota are the primary producers in the aquatic ecosystem since they play a major role in food chain in water. Drifting microbial life of aquatic environment is called plankton. It is composed of phytoplankton and zooplankton. The bottom region of the water harbours largest number of microorganisms called as benthic microorganisms. Microorganisms have been found at all depths and at all latitudes within the ocean. Microorganisms are abundant near shore regions, where organic pollution as well as microbial pollution from the surrounding environment occurs.

Algae are common in these environ-ments. Because of their dependence on light as a source of energy, algae occur primarily in the upper strata of the oceans and seas. Although they constitute a vital part of the food chain in the marine environments, they also can be a nuisance and threat to other forms of life. Nutrient levels in such environments can significantly increase as a result of sewage plant discharges. Under such conditions algal blooms are common.

Most lakes are surrounded by rooted vegetation in a large littoral zone along the shore. Light penetrates the shallow littoral and open-water limnetic zone but is unable to reach the profundal zone in the deep portions of many lakes. 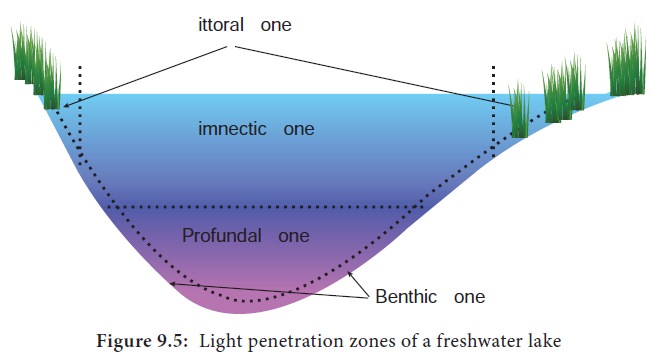 As lake vegetation and animal life decompose, their organic matter provides a source of nutrients. Lakes that have very high concentrations of nutrients (particularly nitrogen and phosphorus) are termed eutrophic and have low oxygen concentrations because of extensive microbial decomposition of organic matter. In comparison, the lakes that receive small amounts of nutrients and are nutrient sparse are oligotrophic. Caulobacter grows well in oligotrophic lakes.

As these waters reach the surface or inland bodies of water, they become contaminated with different types of microorganisms. Rivers flowing water (lotic) in close contact with the soil may contain large numbers of soil bacteria (Bacillus, Actinomyces and Streptomyces), Fungi (Polyphagus, Penicillium and Aspergillus), and algae (Microcystis and Nostoc). These microorganisms frequently impart an earthy odour and taste to river water. Rivers also receive high concentration of bacteria and agricultural chemicals through surface runoff water from adjoining soil during heavy rains and irrigation. In many countries, rivers are heavily polluted with sewage bacteria, especially Escherichia coli, Enterobacter fecalis, Proteus vulgaris and other intestinal bacteria.

The addition of excess quantities of nutrients to aquatic ecosystems termed eutrophication often cause damage on the communities involved. The sudden influx of abundant nutrients along with warm temperatures encourages a heavy surface growth of cyanobacteria and algae called a bloom (Figure 9.6). This heavy matt of biomass effectively shuts off the oxygen supply to the lakes below. The oxygen content below the surface is further depleted by aerobic heterotrophs that actively decompose the organic matter. The lack of oxygen greatly disturbs the ecological balance of the community. It causes massive death of strict aerobes. Fish invertebrates and anaerobic or facultative microbes will survive. Eutrophication is an enrichment of water by nutrients, especially nitrogen and phosphorus which are maintained at high levels that causes structural changes to the eco system.

·        Eutrophication can have serious, long term effect. The most notable effect of eutrophication is algal blooms.

·        When a bloom occurs, the river, lake or ocean becomes covered with algae, which is usually bright green.

·        Blue green algae like Microcystis, Anabaena, Gonyaulax and other Dinoflagellates produce toxins which are poisonous to aquatic lives such as fish.

·        Plankton blooms of green alga create problems of O2 supply in the water.

·        Musty tastes and odors in drinking water are the other effects of Eutrophication.

Five different methods have been suggested to control eutrophication they are,

1.     Ecological management (control the flow of nutrients into natural wastes)