Worldwide energy consumption and demand are growing up since past 50 years.

Worldwide energy consumption and demand are growing up since past 50 years. With the growth of population, demand for energy is also increasing leading to an uneven supply and distribution of resources. Therefore, the requirement of sustainable and eco friendly energy in India to satisfy the energy demand is inevitable. Along with the source of sustainable green energy, biogas production is an alternative way to produce clean energy through solid waste management.

Biogas is a type of renewable energy that can be produced from decomposition of animal and plant waste. It is composed of 50– 75% methane, 25–50% carbon dioxide, 0–10% nitrogen, 0–3% hydrogen sulphide, 0–1% hydrogen and traces of other gases. The term “anaerobic” suggests that the process occurs in the absence of free oxygen and produces CH4 through decomposition of waste in nature and reduces environmental pollution.

Biogas generating technology is a favorable dual purpose technology at present since used as fuel and fertiliser.

Leftover foods fruit & vegetable wastes and cow dung can be subjected to anaerobic digestion for energy production in a variety of ways.

Biogas production is carried out in an airtight cylindrical tank called biogas digester Cow dung is mixed with equal volume of water and made into slurry and fed through the inlet of the biogas unit. The digestion proceeds at 37°C with sufficent amount of nitrogen and phosphorus. The production of biogas sets around 40-50 days, under anaerobic conditions. Production of biogas accomplished in 3 stages namely Hydrolysis, Acetogenesis and Methanogenesis

In this step, several microbes secrete different enzymes, which cleave the complex macromolecules into simpler forms. Organisms that are active in a biogas process during the hydrolysis of polysaccharides include various bacterial groups such as Bacillus, Clostridium, Cellulomonas.

In this step, obligate anaerobic methane producing bacteria produce Methane gas as the major end product along with Carbon dioxide, Hydrogen and traces of other gases. Methanogenesis has six major pathways, each converting a different substrate into Methane gas. The six major substrates used are Carbon dioxide, Formic acid, Acetic acid, Methanol, Methylamine, and Dimethyl sulphate. The methanogenic bacteria include Methanococcus voltae and Methanobacterium formicum (Figure 9.14 a, b). 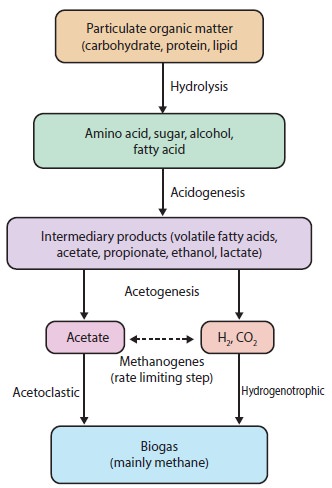 The biogas production is carried out in an air tight cylindrical tank called biogas digester (Figure9.15).

·        Biogas is used to run any type of heat engine in order to generate electrical and mechanical power.