Earth’s environment is endowed with atmosphere, hydrosphere, lithosphere and biosphere.

Earth’s environment is endowed with atmosphere, hydrosphere, lithosphere and biosphere. In the 1930s, F.C. Meier coined the term “Aerobiology”. Air is a natural resource and is fundamental to human life as it makes breathing possible. Its universal presence and requirement for the survival of human beings make air an important environmental factor. Air contains significant number of microorganisms. It also acts as a medium for the transmission of microorganisms including bacteria, viruses,fungi,yeastandprotozoa.Airborne transmission is one of the important modes for the transmission of infectious diseases. Aeromicrobiology is the study of air borne microorganisms.

Earth’s atmosphere is divided into five major layers (Figure 9.1) they are: 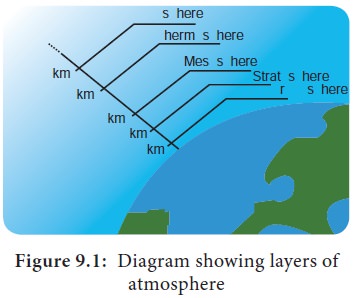 The air in the troposphere, the layer close to the earth is constantly in motion and the temperature decreases with increasing altitude, reaching a low of -57°C at the apex of this region.

Microorganisms are frequently found in the lower portion of the troposphere, where they are dispersed by the air currents. Most of the microbes present in the troposphere are either spore formers or microbes that are easily dispersed in air. The stratosphere has a temperature range of -80°C to -10°C. The temperature in the stratosphere can reach a maximum of several thousand degrees. Microorganisms are not found in the upper regions of the atmosphere because of the temperature extremes, scarcity of available oxygen, absence of nutrients and moisture, and low atmospheric pressure. The relatively low humidity in the atmosphere (especially during daylight hours) and UV rays from the sun, limit the types and number of microorganisms that are able to survive in this part of the biosphere.

The air in our atmosphere is composed of different gaseous molecules. The most common gases are nitrogen (78%), CO2 (0.034%) oxygen (21%) argon (1%) and other molecules in trace level are present in the atmosphere. 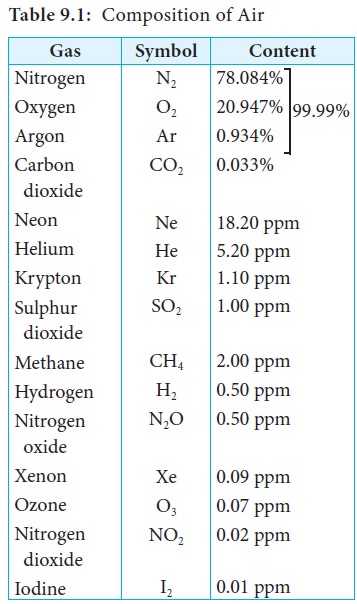 Human beings and animals are continuously inhaling the microbes present in the air that cause various infectious diseases. Most of the respiratory tract infections are acquired by inhaling the air pathogen. The microflora of air is studied under two categories such as indoor and outdoor microflora.

The air found inside the closed environment (building/ room) is referred as indoor air and the microbes present in this region is called indoor microflora.

Sources of Microorganisms in Air

Air is not a natural environment for microorganisms as it doesn’t contain enough moisture and nutrients to support their growth and reproduction. Soil microorganisms when disturbed by the blow of wind, gets liberated into air and remain suspended there for a long period.

Man-made actions like digging, ploughing the soil may also release soil borne microbes into the air. Microorganisms found in water may also enter air by wind action or tidal action in the form of droplets or aerosols. Air currents may bring the microorganism from plant or animal surfaces into air.

Commensal as well as pathogenic flora of the human beings may enter the air by activities like coughing, sneezing, talking and laughing. The microorganisms are discharged out in different forms of particles which are grouped on the basis of their relative size and moisture content. These are aerosols, droplets, droplet nuclei and infectious dust.

An aerosols are mixture of small liquid or solid particles dispresed in air. Aerosols can be natural or anthropogenic. Example: Dust and smoke.

Droplets are formed by sneezing, coughing and talking which consists of saliva and mucus (Figure 9.2). Droplets are relatively large, about 10μm or more in size, and they tend to settle rapidly in still air. When inhaled these droplets are trapped on the moist surfaces of the respiratory tract. Thus, the droplets containing pathogenic microorganisms may be a source of infectious disease. 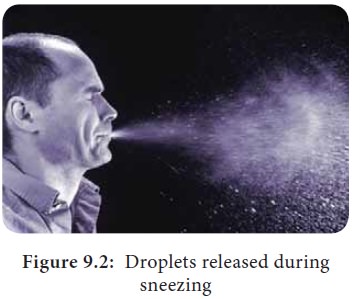 Small droplets in a warm, dry atmosphere tend to evaporate rapidly and become droplet nuclei. These are 1-4μm in size. They can remain in air for longer period and transmit various infectious airborne diseases.

Large aerosol droplets settle out rapidly from air on to various surfaces and get dried. Nasal and throat discharges from patient can also contaminate surfaces and become dry. Microorganisms can survive for longer period in dust. This creates a significant hazard, especially in hospital areas.

Many microbial diseases are transmitted through the air (Table 9.2). The incidence of diseases caused by airborne transmission can be reduced by covering one’s nose and mouth during coughing or sneezing and by the use of face masks. 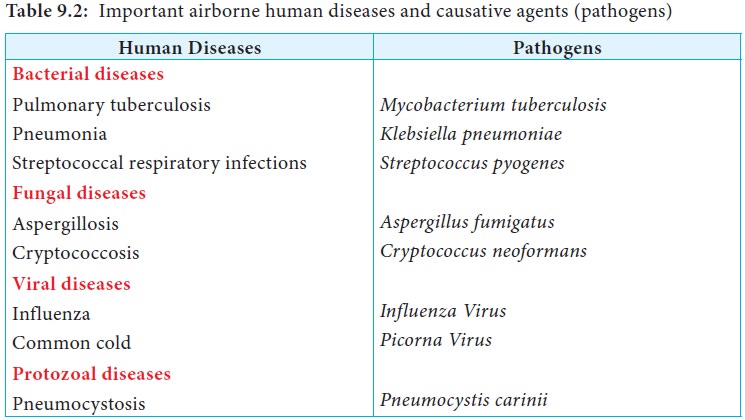 Enumeration of Microorganisms in Air

There are several methods adopted to enumerate microorganisms in air. The most important methods are solid impingement and liquid impingement, filtration, sedimentation, centrifugation electrostatic precipitation. Many tools have been designed for the collection of air samples. Choosing an appropriate sampling device is based on many factors, such as availability, cost, volume of air to be sampled, sampling efficiency and the environmental conditions under which sampling will be conducted. One of the methods is Settle plate technique, where the microorganism carrying particles are allowed to settle onto the medium (solid impingement) for a given period of time and incubated at the optimum temperature (Figure 9.3). It works under the principle of gravitational force. 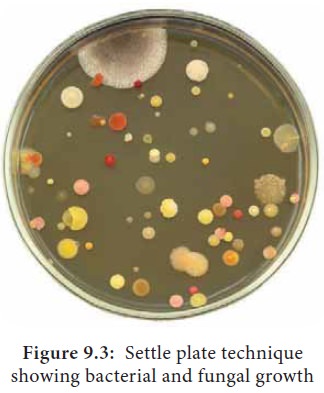 Choice of the medium depends upon the kind of microorganisms to be enumerated. For bacterial isolation Nutrient agar and for fungal isolation Sabourauds dextrose agar (SDA) can be used.

During sampling it is better to keep the plates about one meter above the ground level. Then the plates are uncovered in the selected position for the required period of time. Immediately after exposure for the given period of time the plates are closed with the lids. Then the plates are incubated for 24 hrs at 37°C for aerobic bacteria and for 2 days at room temperature (27°C) for fungi. Enumeration results are expressed as numbers of viable organisms per unit area of air colony forming unit (CFU/ mm3).