All growing microorganisms require water, sources of energy, carbon, nitrogen, oxygen and mineral elements. For culturing microbes on a small scale such as in a laboratory, it is relatively simpler to devise nutritive medium using pure chemicals such that full composition of the medium is known. Such media are called synthetic media. Alternatively, we may use media commonly available in the market such as nutrient broth, typticase soya broth (TSB) or brain heart infusion (BHI) broth. These media contain highly complex components such as peptone, beef extract, yeast extract or casein digest. Such media are called semi-synthetic media. These media are well suited for culturing most microbes in the laboratory. However, when one wants to culture microbes on a large scale for production of useful metabolites, one uses sources of nutrients, which are economical and available readily. In some cases, these nutrient sources or raw materials may need a pretreatment before use. Other considerations while selecting the growth medium are:

•                  Give minimum problems during production process particularly aeration, agitation, extraction and purification of the product.

The carbon and nitrogen sources mentioned above are cheap and easily available.

Growth factors: Some microorganisms cannot synthesize specific nutrients like some amino acids or some vitamins. Such growth factors are incorporated into the medium in adequate amounts as a pure compound or as a component of complex mixture.

Antifoaming agents: In most microbiological processes, foaming is a problem. Foaming may be due to the components of the culture medium or some molecules produced by the microbes. The most common cause of foaming is the presence of proteins in the culture medium. Excess foaming denatures proteins and provides hindrance to free diffusion of oxygen in the medium. Commonly used antifoams are fatty acids, such as olive oil or sunflower oil. Silicones are also used as antifoams.

Energy sources: The carbon sources such as carbohydrates, lipids and proteins in the culture medium are the major sources, which provide energy for the growth of microbes.

Water: Water is the major component of the culture media. When required for culturing microbes in the laboratory, single distilled or double distilled water would suffice. When assessing its suitability for large-scale microbial culture as in industry, we should consider the pH and dissolved salts. Water is also required for ancillary services such as heating, cooling and rinsing.

Clean water of consistent composition is therefore a prerequisite for large-scale cultivation of microbes.

Sterilization procedures: When microbes are cultured in laboratory in 100 -1000 ml flasks, sterilization of the nutrient medium can be easily done in an autoclave at a pressure of 15 pounds psi (per square inch) for 15-20 minutes. However, when microbes are cultured on a large scale such as for fermentation processes in the industry, we need to sterilize thousands of liters of culture medium or the substrate. There is also the problem of sterilizing the huge culture vessel i.e. the fermentor. Steam is used almost universally for sterilization of the fermentation media. Medium may be sterilized in situ in the fermentor itself. But if the medium is sterilized in a separate vessel, the fermentor must be sterilized before sterile medium is added to it. The fermentor is sterilized by passing steam through its jacket or coils. The steam is also sparged into the vessel through all entries allowing it to exit slowly from the air outlet. Steam pressure is held at 15 lbs psi in the vessel for 20 minutes.

The air used in the fermentation process should also be sterilized. This is done by filter sterilization.

Aeration and mixing: When microbes are cultivated in the laboratory, aeration and mixing can be easily achieved by putting the flasks on shakers (shake culture). This may be further augmented by the use of baffle flasks (Fig. 1). In large-scale bioreactors however, transfer of oxygen to microorganisms is particularly difficult because the microorganisms must be well mixed and the oxygen dispersed to achieve relatively uniform concentration. Many fermentor designs have mechanical stirrers to mix the medium, baffles to increase turbulence, which ensure adequate mixing. Forced aeration also provides mixing and the needed oxygen.

In the laboratory, microbes can be cultured in test tubes or ordinary Erlenmeyer flasks. Such cultures are usually carried out in 100 -1000 ml volumes. Growth of microbes in the laboratory can be augmented by simple improvements in the design of the flasks or by the use of shakers.

Baffle flask: One of the simplest ways is to produce a V- shaped notch or indentation in the sides of the flask. Such flasks are called baffle flasks (Fig. 1). This improves the growth of the microbes by improving the efficiency of oxygen transfer due to increased turbulence of the agitated culture medium. 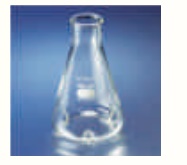 Shakers: Continuous agitation of the culture medium also greatly improves the efficiency of the oxygen transfer and this improves the growth of the microbes. In the laboratory, this is done by the use of shakers (Fig. 2). Shakers may be end-to-end type or rotatory type. These may be designed for use at the ambient temperature or in a controlled temperature environment (incubator shaker).

Fermentors (bioreactors): These are vessels, which are used for large-scale growth of microorganisms under a controlled environment.. It is a closed vessel with adequate arrangement for aeration, agitation, temperature and pH control, and drain or overflow vent to remove the cultured microbes along with their products. The vessel is capable of being operated aseptically for a number of days. These are also equipped with sampling ports, which allow withdrawal of the fermentation broth at regular intervals while the fermentation is in progress.

There are four main types of fermentor or bioreactor designs. The most common of these is a stirred tank bioreactor in which the culture medium is stirred with an impeller. In the bubble column reactor, the air is forced through a bottom sparger that creates enough agitation to ensure proper aeration. Basic features of a fermentor are shown inFig. 3. 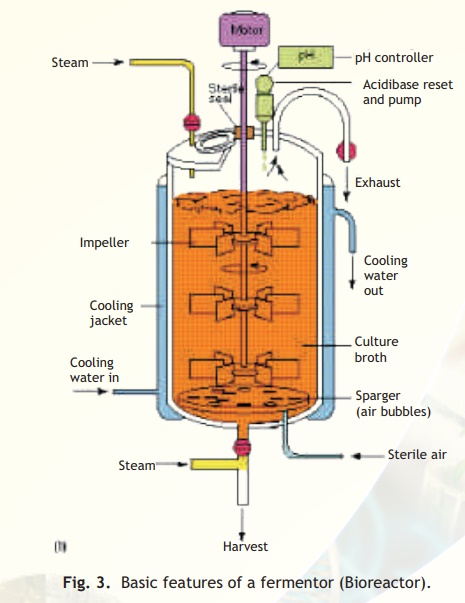 It should be noted that a high concentration of the microbial cells, as is achieved in a fermentor, could rapidly deplete the soluble oxygen in the medium, creating anaerobic conditions that may not be favorable to the growth of microorganisms and/or production of the desired products. So, forced aeration is done. The rapid growth of the microorganisms in the fermentor quickly alters the pH of the medium. So pH of the growing culture is continuously monitored and acid or alkali is added as required.

However, you should not harbor any notion that fermentors are used only for large-scale growth of microbes on an industrial scale (Fig. 4). Small scale fermentors of capacity 10 -100 liters are also used in research laboratories These are used by the scientists in research, to optimize various parameters for the growth of microbes. The laboratory scale fermentors are also used by scientists, to produce enough quantities of metabolites from microbes for research purposes Fig. 4. 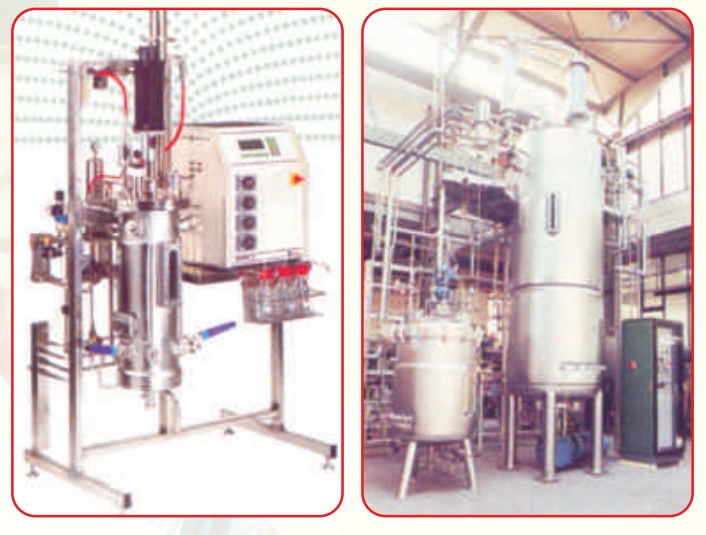 Batch culture: Batch culture is a closed culture system, which contains an initial limited amount of nutrients. After the medium is inoculated with the bacterial inoculum, the organism will grow and show usual growth phases viz. lag, log (exponential), stationary and decline. Growth results in the consumption of nutrients and excretion of microbial products. At stationary phase, the growth is zero. This means, that in such a culture, growing cells are exposed to continually changing environment due to gradual consumption of nutrients and the accumulation of metabolites. The cell density [X], the concentration of substrate [S] and cell-specific substrate turnover rate [QS] during such a system are shown in Fig.5. Culturing microbes in the laboratory, in an ordinary flask, is nothing but an example of batch culture. 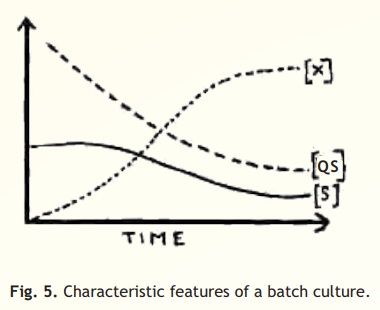 Fed-batch culture: If a batch culture described above is continuously or sequentially fed with fresh medium without removing the growing culture, it is called fed-batch culture. In this system, substrate concentration remains constant and the cell density keeps increasing over time (Fig. 6). This also means that over the period of time, the volume in the culture vessel goes on increasing. 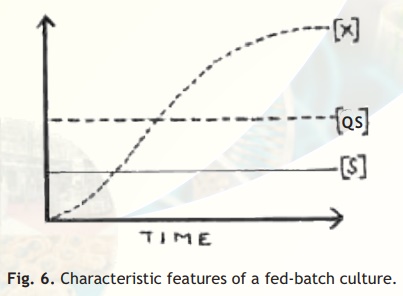 Continuous culture: This is a very interesting way of getting a continuous supply of microbial growth and/or products. The growth medium is designed in such a way that one of the nutrients is in limited quantity. Thus, during the exponential growth, as this nutrient is exhausted the growth will stop. However, just before the nutrient is fully exhausted, fresh medium containing the limited nutrient is added. This is repeated every time the limited nutrient is about to exhaust. This system is also fitted with an overflow device. This means that the added volume displaces out an equal volume of culture from culture vessel. That is, formation of new biomass by the culture is balanced by the loss of culture from the vessel. In continuous culture, cells can be grown at a particular growth rate for an extended period of time. Most of the time, the chemical environment inside a continuous culture is constant. In a chemostat, constant chemical environment is maintained whereas in a turbidostat constant cell concentration is maintained. If medium is fed to such a culture at a suitable rate, a steady state is achieved eventually. At steady state, the cell growth and substrate consumption takes place at a fixed rate (Fig. 7). Growth rate of cells remains constant during steady state operation. This means that at steady state, the concentration of cells, metabolites and other nutrients inside the reactor remain constant. That is, formation of new biomass by the culture is balanced by the loss of the culture from the vessel. Continuous culture is most suitable for production of biomass or metabolites. Continuous culture is widely used for production of both microbial biomass as well as their metabolites. 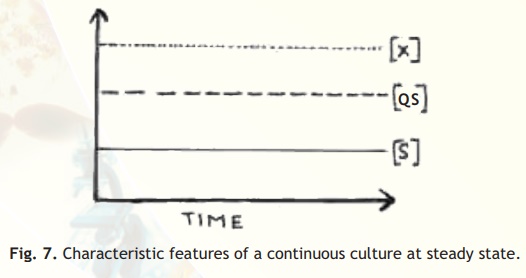 Fig. 7. Characteristic features of a continuous culture at steady state.