The most ancient use of microbial cultures is for the production of fermented foods such as curd and cheese where the whole bacteria are used as starter cultures. The whole microorganisms are also used for preparations such as bacterial vaccines, e.g. vaccines for typhoid and tuberculosis. Single cell protein (SCP) is another example where the whole microorganisms are used a source of protein. Production of alcohol and acids are examples of primary metabolic products, whereas antibiotics are examples of secondary metabolites produced by different microorganisms. Microbial metabolism has also been exploited for the microbial production of vitamins. Extraction of metals from ores and treatment of liquid waste are also examples where microbial metabolism is used to convert unsuitable substrates to useful products. 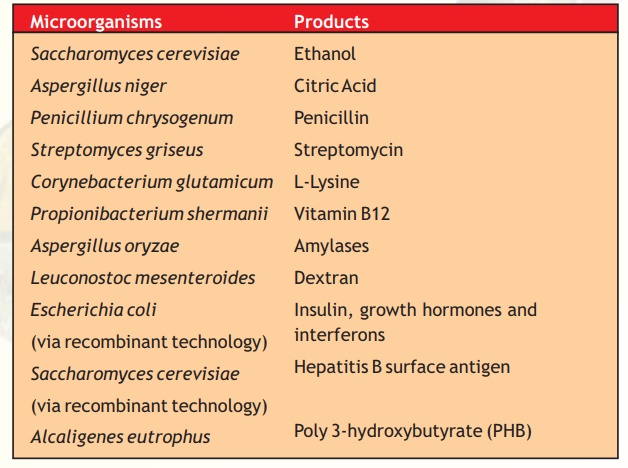 One of the most important uses of microorganisms in recent years has been as hosts for production of recombinant proteins using genetic engineering techniques. Expression of human insulin in Escherichia coli and hepatitis B surface antigen in Yeast for making hepatitis B vaccine are the most notable examples of applications of microbes for human use. Some specific examples of products derived from microbial cultures have been given in Table 1.