·              Colourless liquid with a sharp odour, which becomes gaseous at 390C. It is an extremely reactive chemical and needs to be stored carefully. Contact with water results in an exothermic reaction.

·              Methyl isocyanate (MIC) is a powerful respiratory irritant. Even brief exposure at high concentrations may cause severe injury, burns, or death.

·              At 2 ppm, no odour is generally discernible, but irritation and lacrimation may be noted. Symptoms become more marked at 4 ppm and unbearable at 21 ppm.

·              Exposures to breathing zone concentrations of 0.5 ppm are likely to produce a respiratory response.

·              Ocular exposure can cause permanent damage. A 40% increased incidence of trachoma, 36% increased risk of other lid infection and 45% increased incidence of irritant symp- toms were noted in the exposed population of Bhopal resulting in a “Bhopal eye syndrome”. A follow-up study three years after the Bhopal methyl isocyanate exposure demonstrated an excess of eyelid infection, decreased visual acuity, cataracts, and eye irritation among survivors as compared to controls.

·              There is conflicting data as to whether methyl isocyanate is foetotoxic; however, it crosses the placental barrier. Reports from Bhopal, and animal studies suggest a high degree of adverse reproductive effects and teratogenicity. Long-term effects after survival include RADS (reactive airways dysfunction syndrome), and pregnancy-related problems: high incidence of spontaneous abortions, and increased perinatal mortality.

·              Respiratory function and visual acuity has remained abnormal among the persons exposed in the Bhopal incident for at least two years, and longer in those of close proximity to the 1984 accident. Lung function showed mainly restric-tive changes with small airway obstruction and interstitial deposits. Pulmonary function testing performed 1–7 years after the Bhopal accident demonstrated that deterioration in respiratory function occurred in gas-exposed patients as a consequence of accumulation of inflammatory cells (macrophagus and lymphocytes). The intensity of the inflammatory response was greatest in the most severely exposed patients.

·      Decontamination of skin and eyes with saline. Remove contact lenses and irrigate exposed eyes with copious amounts of room temperature 0.9% saline or water for at least 15 minutes. If irritation, pain, swelling, lacrimation, or photophobia persist after 15 minutes of irrigation, an ophthalmologic examination should be performed. Topical antibiotics may be useful in secondary infection. Severe iritis may be treated with topical atropine or homatropine.

·              Inhalation: covering the face with a wet cloth immediately during exposure may minimise toxicity. Move patient from the toxic environment to fresh air. Monitor for respiratory distress. Observation for 72 hours is advisable to detect delayed onset of acute lung injury. If cough or difficulty in breathing develops, evaluate for hypoxia, respiratory tract irritation, bronchitis, or pneumonitis.

·      Antibiotics are indicated only when there is evidence of infection.

·      Isocyanates are not the same as cyanides and antidotes for the latter such as nitrites and sodium thiosulfate must not be used for the former. Effects of cyanide poisoning have been noted but this is most likely due to impurities.

·      Haemorrhages and cerebral oedema, cherry red colour of blood, fatty infiltration of the liver, and renal tubular necrosis were the principal autopsy findings of Bhopal victims.

Methyl isocyanate (MIC) was involved in one of the most devastating gas disasters, which occurred in Bhopal, Madhya Pradesh in 1984, leaving more than 2000 people dead (unof-ficial estimates put the figure at more than 10,000), and more than 200,000 injured. The incident occurred in a small pesti-cides division of Union Carbide Company (Fig 26.1) manu-facturing carbaryl (a carbamate), for which methyl isocyanate is required. This deadly chemical was stored in huge, double-walled stainless steel tanks, one of which burst on the night of December 2, 1984. More than 24,000 kg of MIC gas escaped over the next several hours into the atmosphere forming an ominous white cloud that drifted rapidly over the surrounding heavily populated neighbourhood killing thousands in their sleep and incapacitating several thousands more. 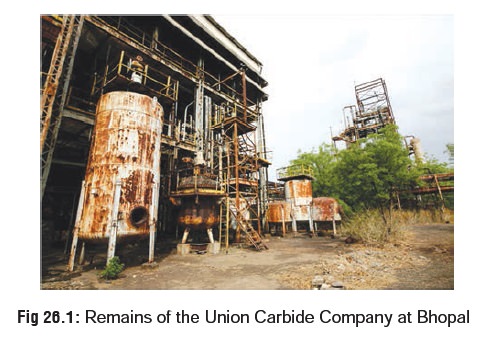