It refers to the long term tendency of the data to move in an upward or downward direction. For example, changes in productivity, increase in the rate of capital formation, growth of population, etc ., follow secular trend which has upward direction, while deaths due to improved medical facilities and sanitations show downward trend. All these forces occur in slow process and influence the time series variable in a gradual manner.

Trend is measured using by the following methods:

Under this method the values of a time series are plotted on a graph paper by taking time variable on the X-axis and the values variable on the Y-axis. After this, a smooth curve is drawn with free hand through the plotted points. The trend line drawn above can be extended to forecast the values. The following points must be kept in mind in drawing the freehand smooth curve.

(i) The curve should be smooth

·              The values of trend obtained by different statisticians would be different and hence not reliable.

Annual power consumption per household in a certain locality was reported below.

Draw a free hand curve for the above data. 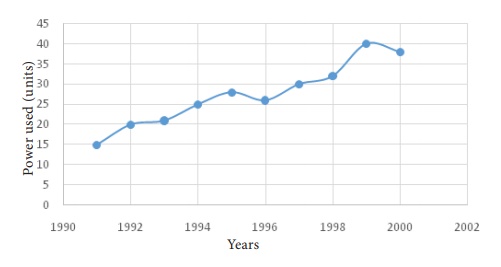 In this method, the series is divided into two equal parts and the average of each part is plotted at the mid-point of their time duration.

(i) In case the series consists of an even number of years, the series is divisible into two halves. Find the average of the two parts of the series and place these values in the mid-year of each of the respective durations.

(ii) In case the series consists of odd number of years, it is not possible to divide the series into two equal halves. The middle year will be omitted. After dividing the data into two parts, find the arithmetic mean of each part. Thus we get semi-averages.

(iii) The trend values for other years can be computed by successive addition or subtraction for each year ahead or behind any year.

Calculate the trend values using semi-averages methods for the income from the forest department. Find the yearly increase.

Trend values for the previous and successive years of the central years can be calculated by subtracting and adding respectively, the increase in annual trend value.

Population of India for 7 successive census years are given below. Find the trend values using semi-averages method.

The trend values have been calculated by successively subtracting and adding the increase in trend for previous and following years respectively.

Find the trend values by semi-average method for the following data.

Similarly the trend values for the other years can be calculated.

Moving averages is a series of arithmetic means of variate values of a sequence. This is another way of drawing a smooth curve for a time series data.

The choice of the length of a moving average is an important decision in using this method.

For a moving average, appropriate length plays a significant role in smoothening the variations.

In general, if the number of years for the moving average is more then the curve becomes smooth.

To find the trend values by the method of three yearly moving averages, the following steps have to be considered.

·              This process must be continued till all the values of the data are taken for calculation.

Calculate the 3-year moving averages for the loans issued by co-operative banks for non-farm sector/small scale industries based on the values given below.

The three year moving averages are shown in the last column. 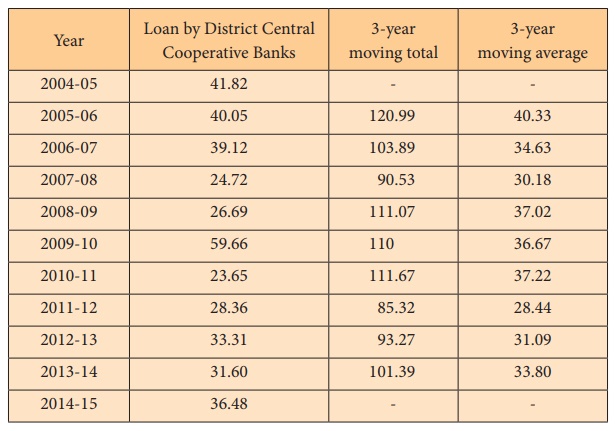 ·              Leave the first year value and add next 4 values from the 2nd year onward and write the sum against its middle position.

Compute the trends by the method of moving averages, assuming that 4-year cycle is present in the following series.

The four year moving averages are shown in the last column. 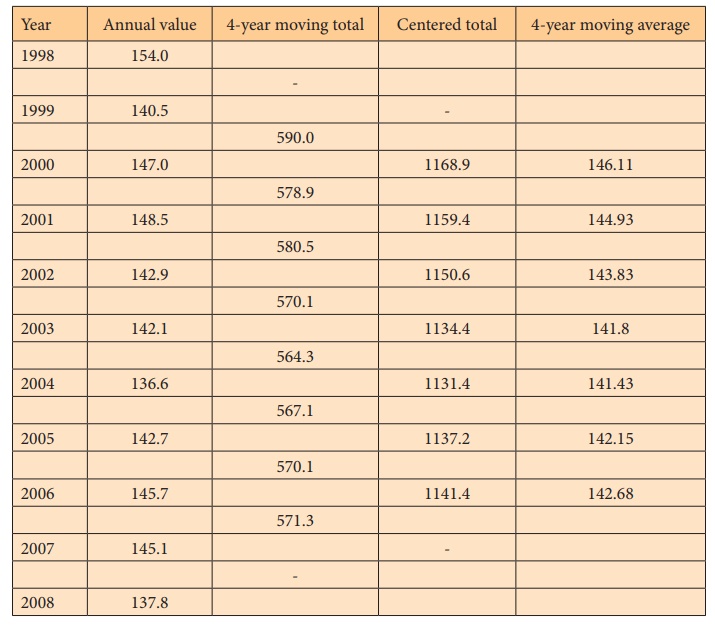 Among the four components of the time series, secular trend represents the long term direction of the series. One way of finding the trend values with the help of mathematical technique is the method of least squares. This method is most widely used in practice and in this method the sum of squares of deviations of the actual and computed values is least and hence the line obtained by this method is known as the line of best fit.

It helps for forecasting the future values. It plays an important role in finding the trend values of economic and business time series data.

Method of least squares is a device for finding the equation which best fits a given set of observations.

Suppose we are given n pairs of observations and it is required to fit a straight line to these data. The general equation of the straight line is:

where a and b are constants. Any value of a and b would give a straight line, and once these values are obtained an estimate of y can be obtained by substituting the observed values of y. In order that the equation y = a + b x gives a good representation of the linear relationship between x and y, it is desirable that the estimated values of yi, say y^ i on the whole close enough to the observed values yi, i = 1, 2, …, n. According to the principle of least squares, the best fitting equation is obtained by minimizing the sum of squares of differences

is minimum. This leads us to two normal equations.

Solving these two equations we get the vales for a and b and the fit of the trend equation (line of best):

Note: The time unit is usually of uniform duration and occurs in consecutive numbers. Thus, when the middle period is taken as the point of origin, it reduces the sum of the time variable x to zero

and hence we get

The number of time units may be even or odd, depending upon this, we follow the method of calculating trend values using least square method.

·              The calculations for this method are difficult compared to the other methods.

Steps for calculating trend values when n is odd:

(i) Subtract the first year from all the years (x)

(ii) Take the middle value (A)

Then use the normal equations: 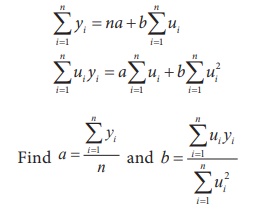 Then the estimated equation of straight line is:

Fit a straight line trend by the method of least squares for the following consumer price index numbers of the industrial workers.

The equation of the straight line is y = a + bx

The normal equations give: 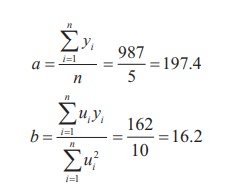 Steps for calculating trend values when n is even:

i). Subtract the first year from all the years (x)

Tourist arrivals (Foreigners) in Tamil Nadu for 6 consecutive years are given in the following table. Calculate the trend values by using the method of least squares.

The equation of the straight line is y = a + bx

Using the normal equation we have, 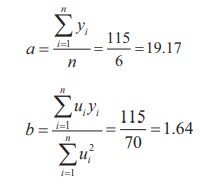