All goods and services produced in the country must be counted and converted against money value during a year. Thus, whatever is produced is either used for consumption or for saving. Thus, national output can be computed at any of three levels, viz., production, income and expenditure. Accordingly, there are three methods that are used to measure national income.

And if these methods are done correctly, the following equation must hold 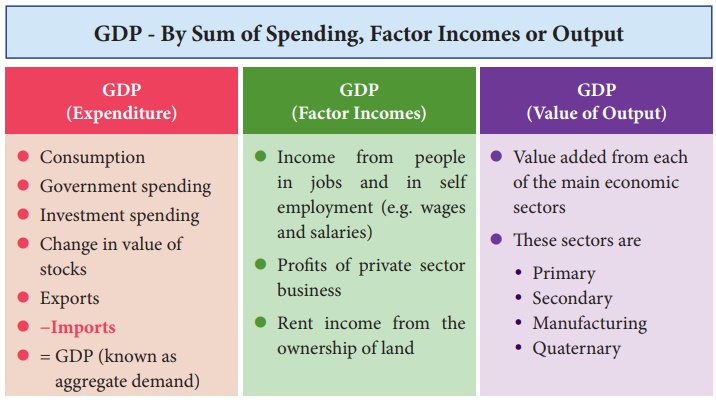 Product method measures the output of the country. It is also called inventory method. Under this method, the gross value of output from different sectors like agriculture, industry, trade and commerce, etc., is obtained for the entire economy during a year. The value obtained is actually the GNP at market prices. Care must be taken to avoid double counting.

In India, the gross value of the farm output is obtained as follows :

(i) Total production of 64 agriculture commodities is estimated. The output of each crop is measured by multiplying the area sown by the average yield per hectare.

(ii) The total output of each commodity is valued at market prices.

(iii) The aggregate value of total output of these 64 commodities is taken to measure the gross value of agricultural output.

(iv) The net value of the agricultural output is measured by making deductions for the cost of seed, manures and fertilisers, market charges, repairs and depreciation from the gross value.

Similarly, the gross values of the output of animal husbandry, forestry, fishery, mining and factory establishments are obtained by multiplying their estimates of total production with market prices. Net value of the output in these sectors is derived by making deductions for cost of materials used in the process of production and depreciation allowances, etc. from gross value of output.

Net value of each sector measured in this way indicates the net contribution of the sector to the national income.

The product method is followed in the underdeveloped countries, but it is less reliable because the margin of error in this method is large. In India, this method is applied to agriculture, mining and manufacturing, including handicrafts.

1. Double counting is to be avoided under value added method. Any commodity which is either raw material or intermediate good for the final production should not be included. For example, value of cotton enters value of yarn as cost, and value of yarn in cloth and that of cloth in garments. At every stage value added only should be calculated.

2. The value of output used for self consumption should be counted while measuring national income.

3. In the case of durable goods, sale and purchase of second hand goods (for example pre owned cars) should not be included.

This method approaches national income from the distribution side. Under this method, national income is calculated by adding up all the incomes generated in the course of producing national product.

1.        The enterprises are classified into various industrial groups.

3.        National income is calculated as domestic factor income plus net factor incomes from abroad. In short,

Data on income from abroad (the rest of the world sector or foreign sector) are obtained from the account of the balance of payments of the country.

While estimating national income through income method, the following precautions should be taken.

Items not to be included

1. Transfer payments are not to be included in estimation of national income as these payments are not received for any services provided in the current year such as pension, social insurance etc.

2. The receipts from the sale of second hand goods should not be treated as part of national income as they do not create new flow of goods or services in the current year.

3. Windfall gains such as lotteries are also not to be included as they do not represent receipts from any current productive activity.

4. Corporate profit tax should not be separately included as it has been already included as a part of company profit.

Items to be included

1. Imputed value of rent for self occupied houses or offices is to be included.

2. Imputed value of services provided by owners of production units (family labour) is to be included.

Under this method, the total expenditure incurred by the society in a particular year is added together. To calculate the expenditure of a society, it includes personal consumption expenditure, net domestic investment, government expenditure on consumption as well as capital goods and net exports. Symbolically,

3. Transfer payments : Expenditures towards payment incurred by the government like old age pension should not be included.

Note: If entire out put is sold within the year, then value of output will be equal to sales itself.