Definitions and Meaning of National Income

National Income provides a comprehensive measure of the economic activities of a nation.

National Income provides a comprehensive measure of the economic activities of a nation. It denotes the country’s purchasing power. The growth of an economy is measured by the rate at which its real national income grows over time. National income thus serves as an instrument of economic planning. Further, national income is one of the most significant macroeconomic variables. Thus, a clear understanding of the meaning, concepts, measurement and uses of national income is essential.

In common parlance, National Income means the total money value of all final goods and services produced in a country during a particular period of time (one year). 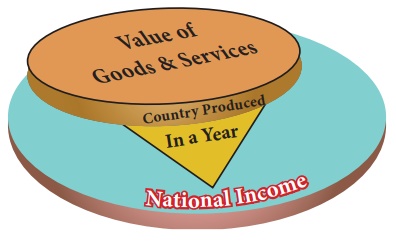 “The labour and capital of a country acting on its natural resources produce annually a certain net aggregate of commodities, material and immaterial including services of all kinds. This is the true net annual income or revenue of the country or national dividend”.

GDP and its detractors.

The  welfare of a nation can scarcely be inferred from a measurement of national  income as defined by the GDP... goals for more growth should specify of what and for what. 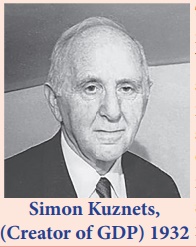 “The net output of the commodities and services flowing during the year from the country’s productive system into the hands of the ultimate consumers or into net addition to the country’s stock of capital goods”.