The following are some of the concepts used in measuring national income.

The following are some of the concepts used in measuring national income.

GDP is the total market value of final goods and services produced within the country during a year. This is calculated at market prices and is known as GDP at market prices.

(X – M) is net export which can be positive or negative.

NDP is the value of net output of the economy during the year. Some of the country’s capital equipment wears out or becomes outdated each year during the production process. husT

(1) value of final consumer goods and services produced in a year to satisfy the immediate wants of the people which is referred to as consumption (C);

(2) gross private domestic investment in capital goods consisting of fixed capital formation, residential construction and inventories of finished and unfinished goods which is called as gross investment (I) ;

(3) goods and services produced or purchased by the government which is denoted by (G) ; and

(5) GNP at market prices means the gross value of final goods and services produced annually in a country plus net factor income from abroad (C + I + G + (X-M) + (R-P)).

Net National Product refers to the value of the net output of the economy during the year. NNP is obtained by deducting the value of depreciation, or replacement allowance of the capital assets from the GNP. It is expressed as,

NNP refers to the market value of output. Whereas NNP at factor cost is the total of income payment made to factors of production. Thus from the money value of NNP at market price, we deduct the amount of indirect taxes and add subsidies to arrive at the net national income at factor cost.

Disposable Income is also known as Disposable personal income. It is the individuals income after the payment of income tax. This is the amount available for households for consumption.

As the entire disposable income is not spent on consumption,

The average income of a person of a country in a particular year is called Per Capita Income. Per capita income is obtained by dividing national income by population. 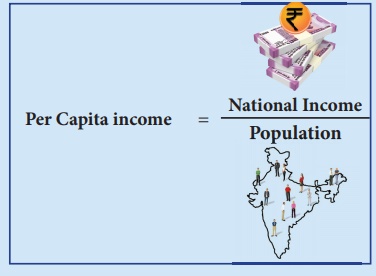 GDP deflator is an index of price changes of goods and services included in GDP. It is a price index which is calculated by dividing the nominal GDP in a given year by the real GDP for the same year and multiplying it by 100.