Home | | Aquaculture Engineering | Methods for moving of fish without the need for external energy - Methods and equipment for internal transport
Posted On :  20.06.2017 03:36 pm

Today there are no commercial systems available based only on voluntary movement of the fish.

Methods for moving of fish without the need for external energy

Today there are no commercial systems available based only on voluntary movement of the fish. Some experiments have, however, been performed where the aim has been to move fish without sup-plying energy. If stress, wounds and labour are considered, such methods are, of course, of interest.

To get the fish to move voluntarily, they need a signal or a stimulus that tells them to go. This can either be a positive signal that will attract the fish or it can be a negative signal from which the fish will swim away. The fish may also be trained so that a signal gives a positive or negative response. What type of signal or stimuli that can be used depends on the species and age. Practical observation has shown that the fish will keep away from areas with low oxygen levels. It is, however, important that environmental conditions are varied in a positive and not a negative way, which again may stress the fish. Flow of water is interpreted as positive stimulus for species that naturally prefer to stay in a water flow, such as salmon. Here juvenile and on-growing fish will swim against the water flow while smolts will drift with the flow. One way to achieve voluntary transport is to equip the tanks with hatches, and have a channel where the fish can swim through and into the next tank. Water flow and light conditions can be manipulated to improve voluntary transport.

The addition of chemical substances to the water can be interpreted as a positive stimulus by the fish. Experiments have shown that certain types of amino acids can attract fish (Fig. 17.14). Manipulation of the light conditions may also have a positive effect on the voluntary movement of fish; dark zones may attract them. 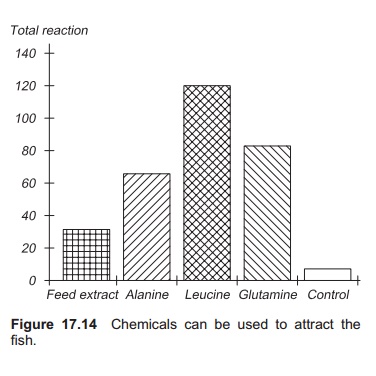 The fish may also be trained to respond to a stimulus voluntarily. The simplest way is to teach the fish to associate a signal with a positive stimulus, i.e. to condition their behaviour. The Russian physiologist Pavlov demonstrated this with his famous dog trials: every time the dog was fed a bell rang and after a while the dog salivated in anticipation of food merely when it heard the bell ring. In fish farming, similar experiments have been carried out in connection with collecting fish. In the author’s experiments fish were trained to associate a flash-ing light with feeding (Fig. 17.15); after a period the fish crowded together around the flashing light, even if they were not fed. Similar principles have been used in the sea. Sound has been used as a signal when feeding fish in a cage. After a period of training the net bag was removed and the fish 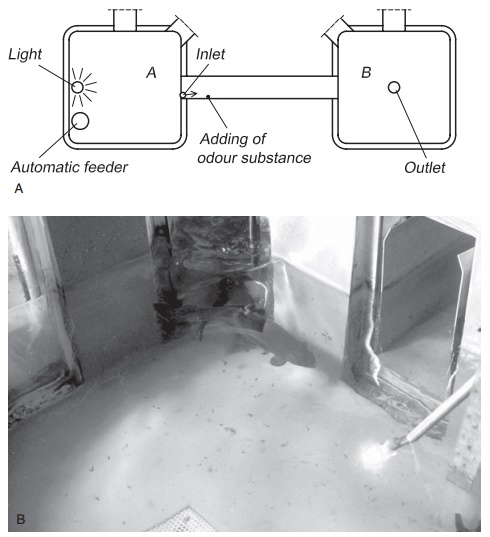 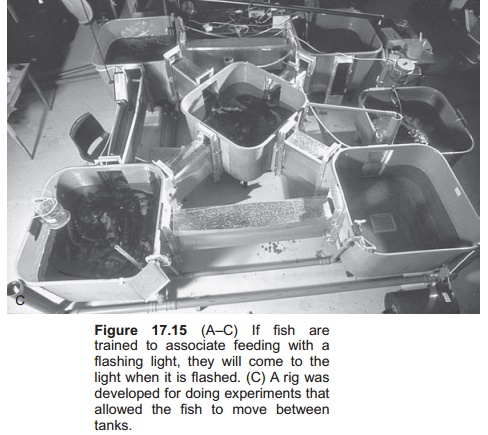 released; they could now swim and search for natural feed over a larger area. By making a sound again the fish crowded around the feeder and col-lection for harvesting was possible. In tanks a sound signal is difficult to use because of echoes from the walls which make it impossible for the fish to locate the sound source exactly.

The main problem with voluntary transport is its effectiveness and the time needed when the fish are to be moved. Not all the fish respond to the chosen stimulus, which also represents a problem.