Metabolism (mĕ-tab′ō-lizm; change) is the total of all the chemi-cal reactions that occur in the body.

Metabolism (mĕ-tab′ō-lizm; change) is the total of all the chemi-cal reactions that occur in the body. It consists of catabolism (kă-tab′ ō-lizm), the energy-releasing process by which large molecules are broken down into smaller ones, and anabolism (ă-nab′ ō-lizm), the energy-requiring process by which small molecules are joined to form larger ones. Catabolism begins during the process of digestion and is concluded within individual cells. Anabolism occurs in all cells of the body as they divide to form new cells, maintain their own intracellular structure, and produce molecules such as hormones, neurotransmitters, or extracellular matrix molecules for export. The energy derived from catabolism is used to drive anabolic reactions. 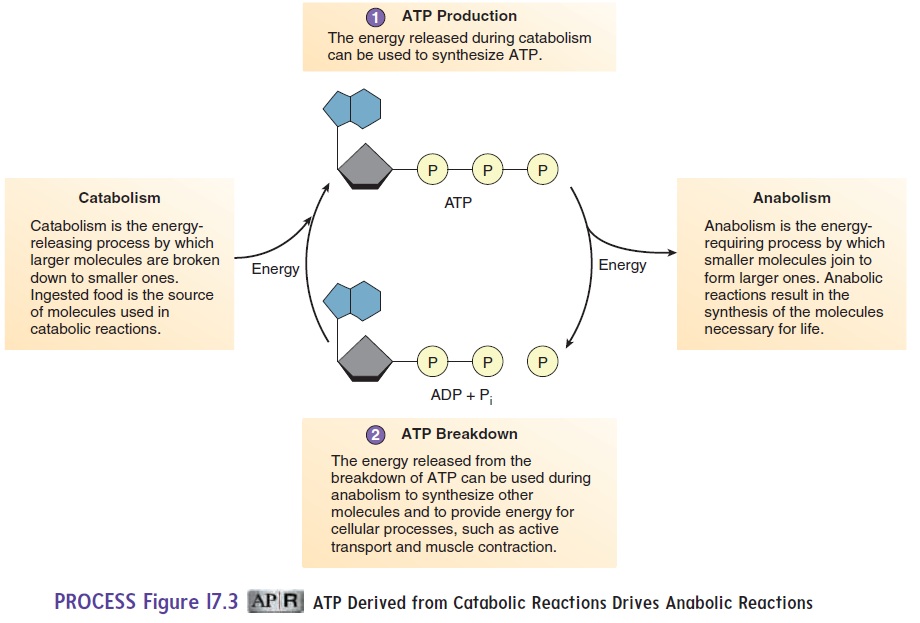 ATP is often called the energy currency of the cell. When ATP is broken down to ADP, cells can use the released energy for active transport, muscle contraction, and molecule synthesis. Because the body has high energy demands, it uses ATP rapidly.