Sources in the Diet

Carbohydrates (kar-bō-hı̄′drātz) include monosaccharides,disaccharides, and polysaccharides . Although most of the carbohydrates we ingest are derived from plants, lactose is derived from animals. The most common monosaccharides in the diet are glucose and fructose. Plants capture energy from sunlight and use that energy to produce glucose, which can be found in vegetables, fruits, molasses, honey, and syrup. Fructose is most often derived from fruits and berries.

Complex carbohydrates are large polysaccharides, which arecomposed of long chains of glucose (see figure 2.11). Examples are starch, glycogen, and cellulose, which differ from one another in the arrangement of the glucose molecules and the structure of the chemical bonds holding them together. 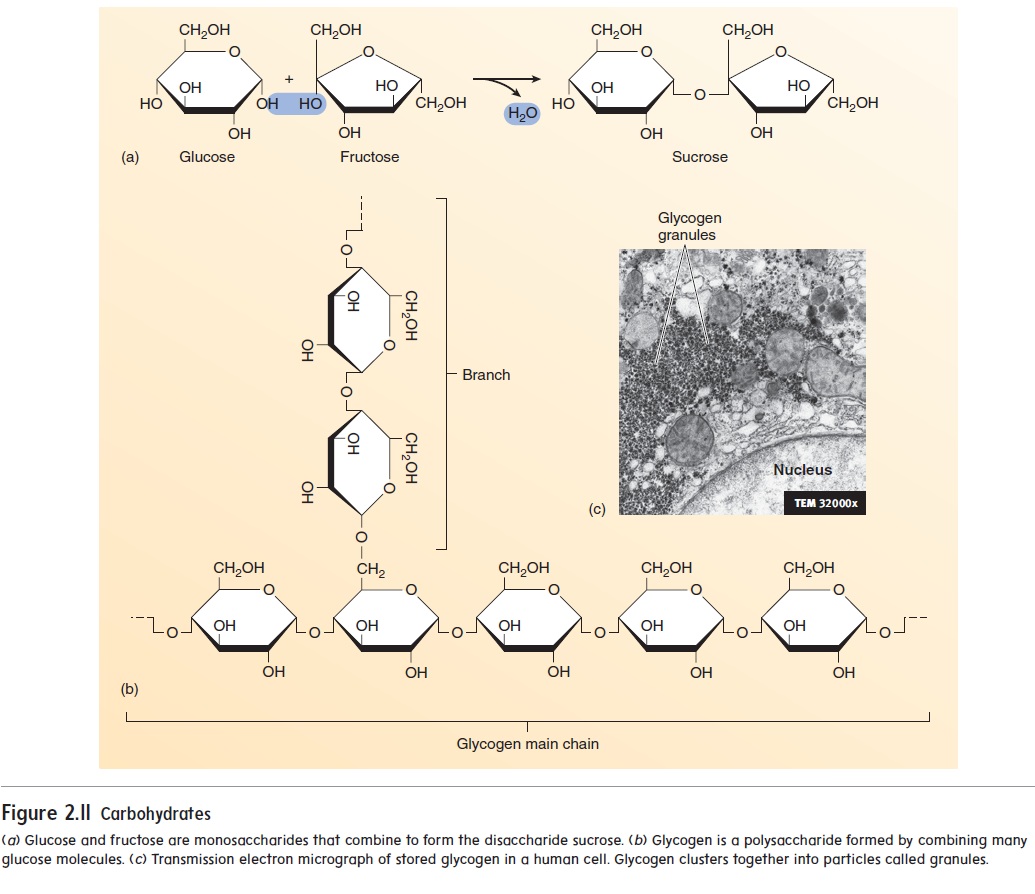 Uses of Carbohydrates in the Body

During digestion, polysaccharides and disaccharides are split into monosaccharides, which are absorbed into the blood (see chap-ter 16). Humans have enzymes that can break the bonds between the glucose molecules of starch and glycogen, but they do not have the enzymes necessary to digest cellulose. Therefore, it is important to thoroughly cook or chew plant matter. Cooking and chewing break down the plant cell walls and expose the starches contained inside the cells to digestive enzymes. The undigested cellulose provides fiber, or “roughage,” which increases the bulk of feces, making it easier to defecate.

Fructose and other monosaccharides absorbed into the blood are converted into glucose by the liver. Glucose, whether absorbed directly from the digestive tract or synthesized by the liver, is an energy source used to produce ATP. Because the brain relies almost entirely on glucose for its energy, the body carefully regulates blood glucose levels.

If an excess amount of glucose is present in the diet, the glu-cose is used to make glycogen, which is stored in muscle and in the liver. Glycogen can be rapidly converted back to glucose when energy is needed. Because cells can store only a limited amount of glycogen, additional glucose that is ingested is converted into lipids for long-term storage in adipose tissue.

In addition to being used as an energy source, sugars form part of deoxyribonucleic acid (DNA), ribonucleic acid (RNA), and ATP molecules. Sugars also combine with proteins to form glycoproteins, some of which function as receptor molecules on the outer surface of the cell membrane.

According to the Dietary Guidelines Advisory Committee, the Acceptable Macronutrient Distribution Range (AMDR) for car-bohydrates is 45–65% of total kilocalories. Although a minimum level of carbohydrates is not known, it is assumed that amounts of 100 g or less per day result in overuse of the body’s proteins and lipids for energy sources. Because muscles are primarily protein, the use of proteins for energy can result in the breakdown of muscle tissue. The extensive use of lipids as an energy source can result in acidosis .

Complex carbohydrates are recommended in the diet because many starchy foods contain other valuable nutrients, such as vitamins and minerals, and because the slower rate of digestion and absorption of complex carbohydrates does not result in large increases and decreases in blood glucose level, as the consumption of large amounts of simple sugars does. Eating whole grains also helps a person meet the recommended fiber intake (25 g/day for females and 38 g/day for males). Foods containing large amounts of simple sugars, such as soft drinks and candy, are rich in carbohydrates but have few other nutrients. For example, a typical soft drink is mostly sucrose, containing 9 teaspoons of sugar per 12-oz container. In excess, the consumption of these kinds of foods usually results in obesity and tooth decay.