Monosaccharides are the breakdown products of carbohydrate digestion. Of these, glucose is the most important in terms of cellular metabolism.

Monosaccharides are the breakdown products of carbohydrate digestion. Of these, glucose is the most important in terms of cellular metabolism. Glucose is transported in the circulation to all tissues of the body, where it is used as a source of energy. Any excess glucose in the blood following a meal can be used to form glycogen (glı̄′k̄o-jen;glyks,sweet), or it can be partially brokendown and the components used to form lipids.

Glycolysis (glı̄-kol′i-sis) is a series of chemical reactions thatoccurs in the fluid part of cytoplasm surrounding the organelles. It results in the breakdown of glucose to two pyruvic (pı̄ -roo′ vik) acid molecules (figure 17.5). When glucose is converted to pyruvicacid, two ATP molecules are used and four ATP molecules are produced, for a net gain of two ATP molecules. 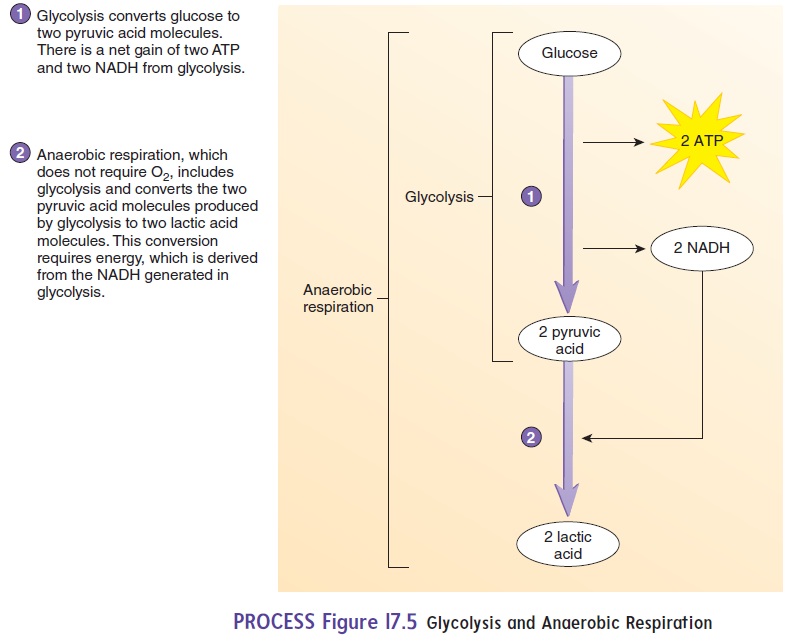 Glucose consists of 6 carbon atoms, 12 hydrogen atoms, and 6 oxygen atoms covalently bonded together. During the break-down of glucose, a hydrogen ion (H+) and two electrons (e−) are released and can attach to a carrier molecule, which moves the H+ and electrons to other parts of the cell. A very common carrier molecule in cells is nicotinamide adenine dinucleotide (nik-ō - tin′ a-mı̄ d ad′ ĕ -nē n dı̄ -noo′ klē -ō -tı̄ d) (NADH):

The H+ and high-energy electrons in the NADH molecules can be used in other chemical reactions or in the production of ATP mol-ecules in the electron-transport chain (described later in this section).

Lactic acid fermentation, a form of anaerobic respiration, is thebreakdown of glucose in the absence of O2 to produce two molecules of lactic (lak′ tik) acid and two molecules of ATP (figure 17.5). The ATP thus produced is a source of energy during activities, such as intense exercise, when insufficient O2 is delivered to tissues. Lactic acid fermentation can be divided into two phases:

2.         Lactic acid formation. Pyruvic acid is converted to lacticacid, a reaction that requires the input of energy from the NADH produced in phase 1 of lactic acid fermentation.

Some of the reactions that convert lactic acid to glucose require the input of energy derived from ATP that is pro-duced by aerobic respiration. The O2 necessary to make enough ATP for the synthesis of glucose from lactic acid contributes to the oxygen deficit .

Aerobic (ār-ō′ bik) respiration is the breakdown of glucose in thepresence of O2 to produce CO2, water, and 38 molecules of ATP (figure 17.6). Aerobic respiration can be divided into four phases: 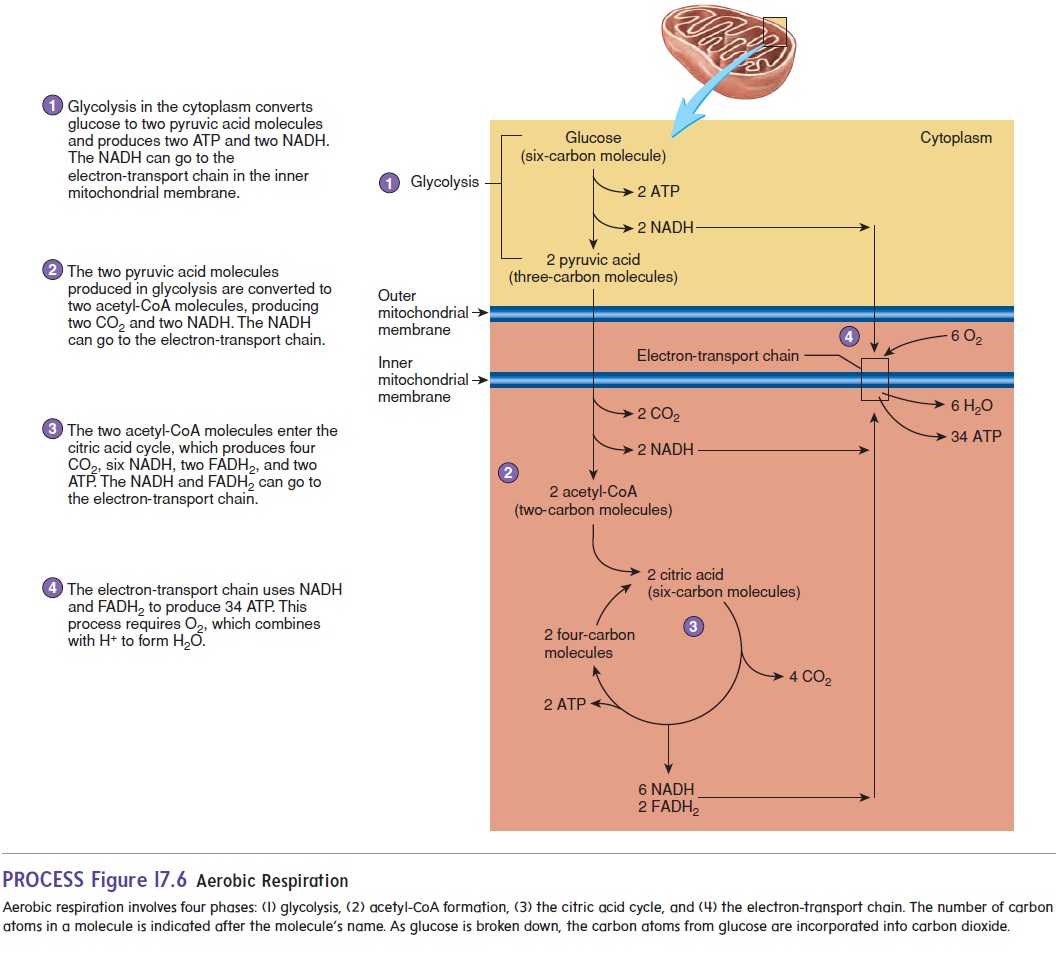 2.         Acetyl-CoA formation. Each pyruvic acid moves from thecytoplasm into a mitochondrion, where enzymes removea carbon atom from the three-carbon pyruvic acid molecule to form CO2 and a two-carbon acetyl (as′ e-til, a-set′ il) group. Hydrogen ions and electrons are released in the reaction and can be used to produce NADH. Eachacetyl group combines with coenzyme A (CoA), derived from vitamin B2, to form acetyl-CoA. Because two pyruvic acid molecules are produced in phase 1, phase 2 results in two acetyl-CoAs, two CO2 molecules, and two NADH molecules for each glucose molecule.

3.  Citric acid cycle. Each acetyl-CoA combines with a four-carbon molecule to form a six-carbon citric acid molecule, which enters the citric acid cycle. The citric (sit′ rik) acidcycle is also called thetricarboxylic(trı̄-kar-bok′ sil-ik)acid(TCA) cycle (citric acid has three carboxylic acid groups) orthe Krebs cycle, after its discoverer, British biochemist Sir Hans Krebs (1900–1981). The citric acid cycle is a series of reactions wherein the six-carbon citric acid molecule is converted, in a number of steps, into a four-carbon molecule (figure 17.6). The four-carbon molecule can then combine with another acetyl-CoA molecule to form anothercitric acid molecule and reinitiate the cycle. During the cycle, two carbon atoms are used to form CO2, and energy, H+, and electrons are released. Some of the energy can be used to produce ATP. Most of the energy, H+, and electrons are used to form NADH molecules and another carrier molecule, called flavin (flā′ vin) adenine dinucleotide(FADH2). These molecules are used in the electron-transport chain to generate additional ATP. Carbon dioxide diffuses out of the cell and into the blood. It is transported by the circulatory system to the lungs, where it is expired.Thus, the carbon atoms that constitute food molecules, such as glucose, are eventually eliminated from the body as CO2. We literally breathe out part of the food we eat! 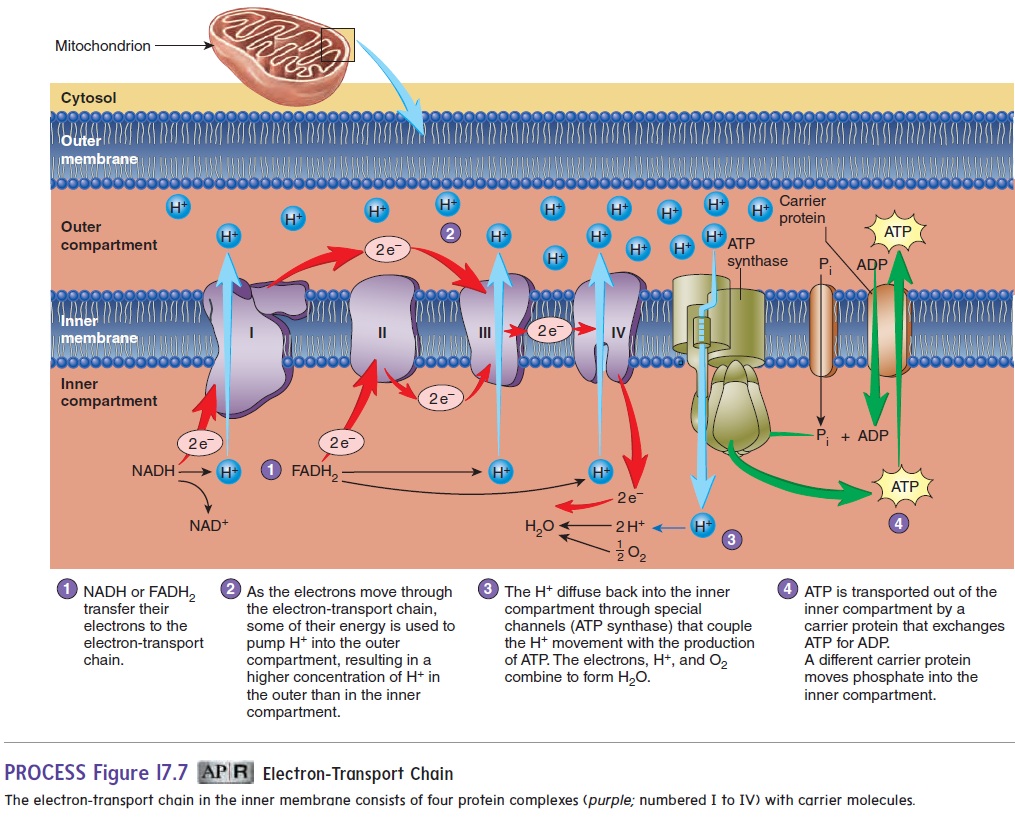 Without O2 to accept the H+ and electrons, the citric acid cycle and the electron-transport chain cannot function. Note that the O2 we breathe in is eventually bound to two hydrogen atoms to become water, which has many uses in the body .

In contrast, in aerobic respiration, each glucose molecule yields 38 ATP: