Although the term metabolism is used to describe all of the chemical reactions that take place within the body, metabolic rate is usually expressed as an amount of heat production.

Although the term metabolism is used to describe all of the chemical reactions that take place within the body, metabolic rate is usually expressed as an amount of heat production. This is because many body processes that utilize ATP also produce heat. These processes include the contraction of skeletal muscle, the pumping of the heart, and the normal breakdown of cellular components. Therefore, it is possible to quantify heat production as a measure of metabolic activity.

The energy required for merely living (lying qui-etly in bed) is the basal metabolic rate (BMR).

A number of factors affect the metabolic rate of an active person:

2. Age—Metabolic rate is highest in young children and decreases with age. The energy require-ments for growth and the greater heat loss by a smaller body contribute to the higher rate in chil-dren. After growth has stopped, metabolic rate decreases about 2% per decade. If a person becomes less active, the total decrease is almost 5% per decade.

3. Body configuration of adults—Tall, thin people usually have higher metabolic rates than do short, stocky people of the same weight. This is so because the tall, thin person has a larger surface area (pro-portional to weight) through which heat is con-tinuously lost. The metabolic rate, therefore, is slightly higher to compensate for the greater heat loss. The variance of surface-to-weight ratios for different body configurations is illustrated in Fig. 17–5. 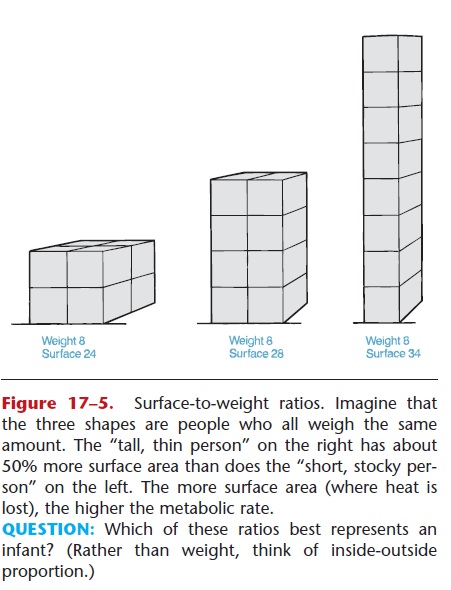 Figure 17–5. Surface-to-weight ratios. Imagine that the three shapes are people who all weigh the same amount. The “tall, thin person” on the right has about 50% more surface area than does the “short, stocky per-son” on the left. The more surface area (where heat is lost), the higher the metabolic rate.

QUESTION: Which of these ratios best represents an infant? (Rather than weight, think of inside-outside proportion.)

5. Sympathetic stimulation—In stress situations, the metabolism of many body cells is increased. Also contributing to this are the hormones epinephrine and norepinephrine. As a result, metabolic rate increases.

6. Decreased food intake—If the intake of food decreases for a prolonged period of time, metabolic rate also begins to decrease. It is as if the body’s metabolism is “slowing down” to conserve what-ever energy sources may still be available.

7. Climate—People who live in cold climates may have metabolic rates 10% to 20% higher than peo-ple who live in tropical regions. This is believed to be due to the variations in the secretion of thyrox-ine, the hormone most responsible for regulation of metabolic rate. In a cold climate, the necessity for greater heat production brings about an increased secretion of thyroxine and a higher meta-bolic rate.