At either end of the age spectrum, however, tem-perature regulation may not be as precise as it is in older children or younger adults. Infants have more surface area (skin) relative to volume and are likely to lose heat more rapidly. In the elderly, the mechanisms that maintain body temperature may not function as efficiently as they once did, and changes in environ-mental temperature may not be compensated for as quickly or effectively. This is especially important to remember when caring for patients who are very young or very old.

Cell respiration, the process that releases energy from food to produce ATP, also produces heat as one of its energy products. Although cell respiration takes place constantly, many factors influence the rate of this process:

2. In stress situations, epinephrine and norepineph-rine are secreted by the adrenal medulla, and the sympathetic nervous system becomes more active. Epinephrine increases the rate of cell respiration, especially in organs such as the heart, skeletal mus-cles, and liver. Sympathetic stimulation also in-creases the activity of these organs. The increased production of ATP to meet the demands of the stress situation also means that more heat will be produced.

3. Organs that are normally active (producing ATP) are significant sources of heat when the body is at rest. The skeletal muscles, for example, are usually in a state of slight contraction called muscle tone. Because even slight contraction requires ATP, the muscles are also producing heat. This amounts to about 25% of the total body heat at rest and much more during exercise, when more ATP is produced.

The liver is another organ that is continually active, producing ATP to supply energy for its many functions. As a result, the liver produces as much as 20% of the total body heat at rest. The heat produced by these active organs is dispersed throughout the body by the blood. As the relatively cooler blood flows through organs such as the mus-cles and liver, the heat they produce is transferred to the blood, warming it. The warmed blood circu-lates to other areas of the body, distributing this heat.

4. The intake of food also increases heat production, because the metabolic activity of the digestive tract is increased. Heat is generated as the digestive organs produce ATP for peristalsis and for the syn-thesis of digestive enzymes.

The factors that affect heat production are summa-rized in Table 17–1. 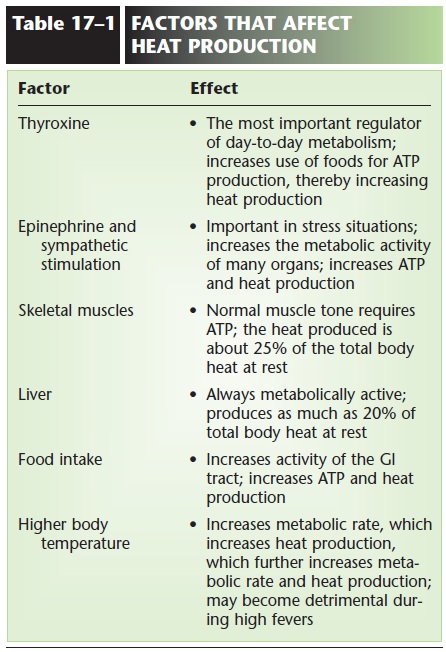 The pathways of heat loss from the body are the skin, the respiratory tract, and, to a lesser extent, the uri-nary and digestive tracts.

Heat Loss through the Skin

Because the skin covers the body, most body heat is lost from the skin to the environment. When the envi-ronment is cooler than body temperature (as it usually is), heat loss is unavoidable. The amount of heat that is lost is determined by blood flow through the skin and by the activity of sweat glands.

Blood flow through the skin influences the amount of heat lost by the processes of radiation, conduction, and convection. Radiationmeans that heat from the body is transferred to cooler objects not touching the skin, much as a radiator warms the contents of a room (radiation starts to become less effective when the environmental temperature rises above 88°F). Con-duction is the loss of heat to cooler air or objects, such as clothing, that touch the skin. Convection means that air currents move the warmer air away from the skin surface and facilitate the loss of heat; this is why a fan makes us feel cooler on hot days. Loss of heat by convection also gives us the “wind chill factor” we hear about in winter. A cold day that is windy will feel colder than a cold day when the air is still, because the wind blows the slightly warmer air surrounding the body away, replacing it with colder air.

The other mechanism by which heat is lost from the skin is sweating. The eccrine sweat glands secrete sweat (water) onto the skin surface, and excess body heat evaporates the sweat. Think of running water into a hot frying pan; the pan is rapidly cooled as its heat vaporizes the water. Although sweating is not quite as dramatic (no visible formation of steam), the principle is just the same.

Sweating is most efficient when the humidity of the surrounding air is low. Humidity is the percentage of the maximum amount of water vapor the atmosphere can contain. A humidity reading of 90% means that the air is already 90% saturated with water vapor and can hold little more. In such a situation, sweat does not readily evaporate, but instead remains on the skin even as more sweat is secreted.

If the humidity is 40%,  however, the air can hold a great deal more water vapor, and sweat evaporates quickly from the skin sur-face, removing excess body heat. In air that is com-pletely dry, a person may tolerate a temperature of 200°F for nearly 1 hour.

Although sweating is a very effective mechanism of heat loss, it does have a disadvantage in that it requires the loss of water in order to also lose heat. Water loss during sweating may rapidly lead to dehydration, and the water lost must be replaced by drinking fluids.

Small amounts of heat are also lost in what is called “insensible water loss.” Because the skin is not like a plastic bag, but is somewhat permeable to water, a small amount of water diffuses through the skin and is evaporated by body heat. Compared to sweating, how-ever, insensible water loss is a minor source of heat loss.

Heat Loss through the Respiratory Tract

Animals such as dogs that do not have numerous sweat glands often pant in warm weather. Panting is the rapid movement of air into and out of the upper respiratory passages, where the warm surfaces evapo-rate large amounts of water. In this way the animal may lose large amounts of heat.

Heat Loss through the Urinary and Digestive Tracts

When excreted, urine and feces are at body tempera-ture, and their elimination results in a very small amount of heat loss.

The pathways of heat loss are summarized in Table 17–2. 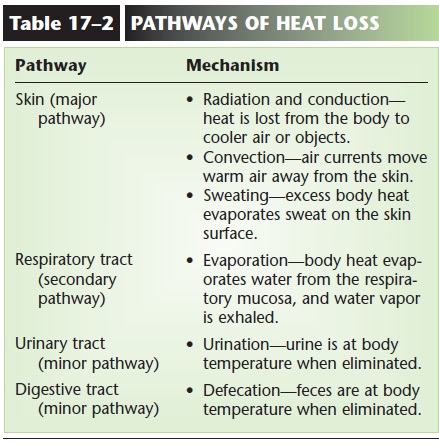 In a warm environment or during exercise, the body temperature tends to rise, and greater heat loss is needed.

This is accomplished by vasodilation in the dermis and an increase in sweating. Vasodilation brings more warm blood close to the body surface, and heat is lost to the environment. However, if the environmental temperature is close to or higher than body temperature, this mechanism becomes ineffec-tive. The second mechanism is increased sweating, in which excess body heat evaporates the sweat on the skin surface. As mentioned previously, sweating becomes inefficient when the atmospheric humidity is high.

On hot days, heat production may also be decreased by a decrease in muscle tone. This is why we may feel very sluggish on hot days; our muscles are even slightly less contracted than usual and are slower to respond.

In a cold environment, heat loss from the body is unavoidable but may be reduced to some extent. Vasoconstriction in the dermis shunts blood away from the body surface, so that more heat is kept in the core of the body. Sweating decreases, and will stop completely if the temperature of the hypothalamus falls below about 98.6°F. (Remember that the internal temperature of the brain is higher than an oral tem-perature, and is less subject to any changes in environ-mental temperature.)

If these mechanisms are not sufficient to prevent the body temperature from dropping, more heat may be produced by increasing muscle tone. When this greater muscle tone becomes noticeable and rhythmic, it is called shivering and may increase heat production by as much as five times the normal.

People also have behavioral responses to cold, and these too are important to prevent heat loss. Such things as putting on a sweater or going indoors reflect our awareness of the discomfort of being cold. For people (we do not have thick fur as do some other mammals), these voluntary activities are of critical importance to the prevention of excessive heat loss when it is very cold.

A fever is an abnormally high body temperature and may accompany infectious diseases, extensive physical trauma, cancer, or damage to the CNS. The substances that may cause a fever are called pyrogens. Pyrogens include bacteria, foreign proteins, and chemicals released during inflammation. These inflammatory chemicals are called endogenous pyro-gens. Endogenous means “generated from within.” It is believed that pyrogens chemically affect the hypo-thalamus and “raise the setting” of the hypothalamic thermostat. The hypothalamus will then stimulate responses by the body to raise body temperature to this higher setting.

Let us use as a specific example a child who has a strep throat. The bacterial and endogenous pyrogens reset the hypothalamic thermostat upward, to 102°F. At first, the body is “colder” than the setting of the hypothalamus, and the heat conservation and produc-tion mechanisms are activated. The child feels cold and begins to shiver (chills). Eventually, sufficient heat is produced to raise the body temperature to the hypo-thalamic setting of 102°F. At this time, the child will feel neither too warm nor too cold, because the body temperature is what the hypothalamus wants.

As the effects of the pyrogens diminish, the hypo-thalamic setting decreases, perhaps close to normal again, 99°F. Now the child will feel warm, and the heat loss mechanisms will be activated. Vasodilation in the skin and sweating will occur until the body tempera-ture drops to the new hypothalamic setting. This is sometimes referred to as the “crisis,” but actually the crisis has passed, because sweating indicates that the body temperature is returning to normal. The sequence of temperature changes during a fever is shown in Fig. 17–1. 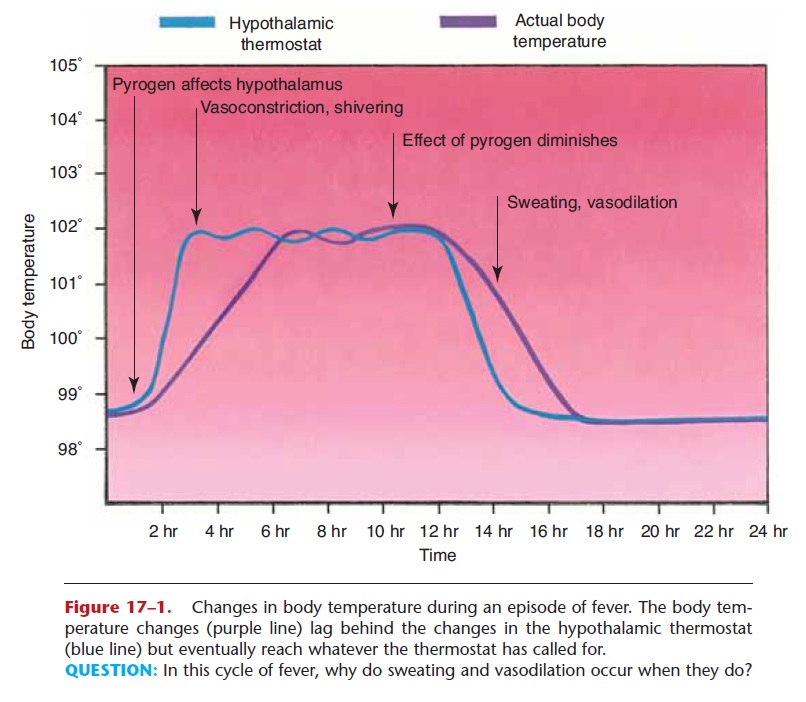 You may be wondering if a fever serves a useful pur-pose. For low fevers that are the result of infection, the answer is yes. White blood cells increase their activity at moderately elevated temperatures, and the metabo-lism of some pathogens is inhibited. Thus, a fever may be beneficial in that it may shorten the duration of an infection by accelerating the destruction of the pathogen.

High fevers, however, may have serious conse-quences. A fever increases the metabolic rate, which increases heat production, which in turn raises body temperature even more. This is a positive feedback mechanism that will continue until an external event (such as aspirin or death of the pathogens) acts as a brake (see Fig. 1–3). When the body temperature rises above 106°F, the hypothalamus begins to lose its abil-ity to regulate temperature. The proteins of cells, especially the enzymes, are also damaged by such high temperatures. Enzymes become denatured, that is, lose their shape and do not catalyze the reactions nec-essary within cells (see Fig. 2–9). As a result, cells begin to die. This is most serious in the brain, because neurons cannot be replaced, and cellular death is the cause of brain damage that may follow a prolonged high fever. The effects of changes in body temperature on the hypothalamus are shown in Fig. 17–2. 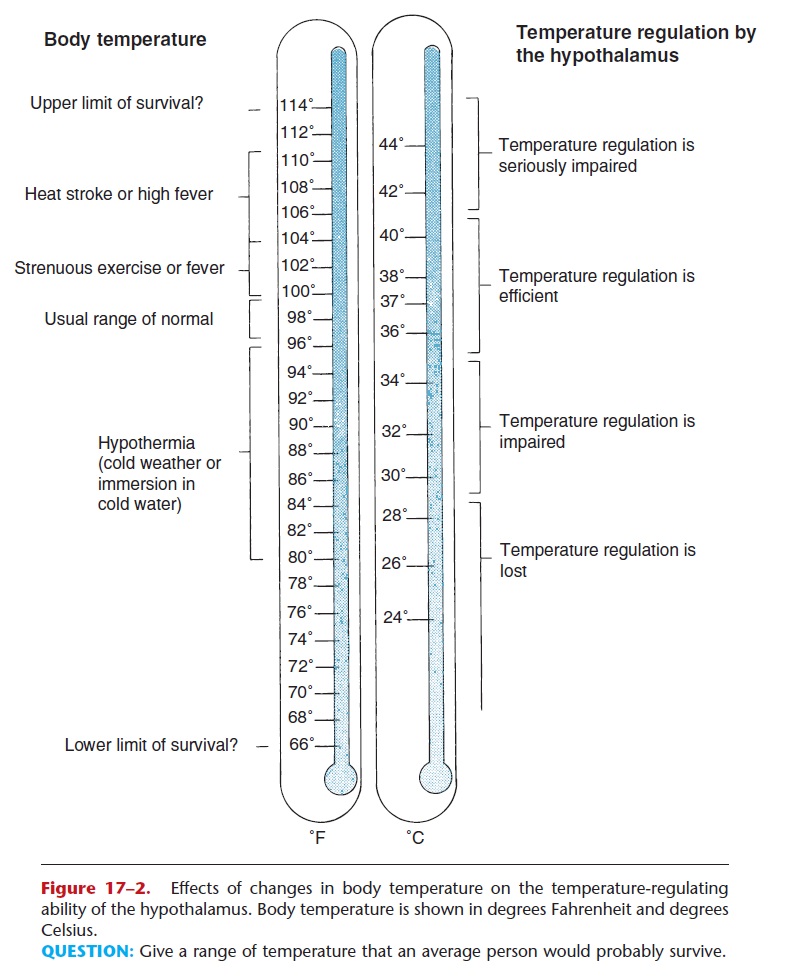 A medication such as aspirin is called an anti-pyretic because it lowers a fever, probably by affecting the hypothalamic thermostat. To help lower a high fever, the body may be cooled by sponging it with cool water. The excessive body heat will cause this external water to evaporate, thus reducing temperature. A very high fever requires medical attention. 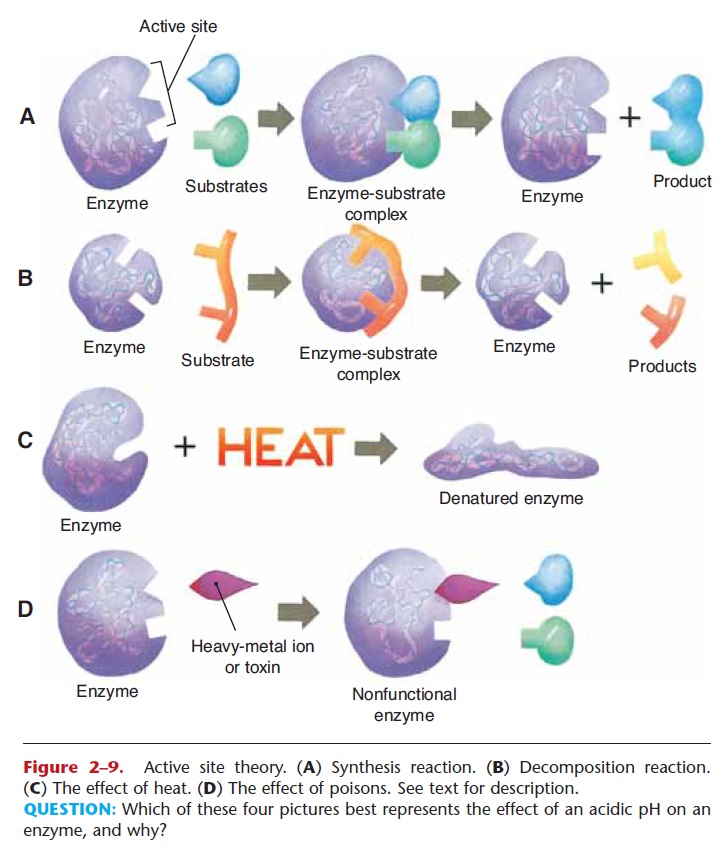 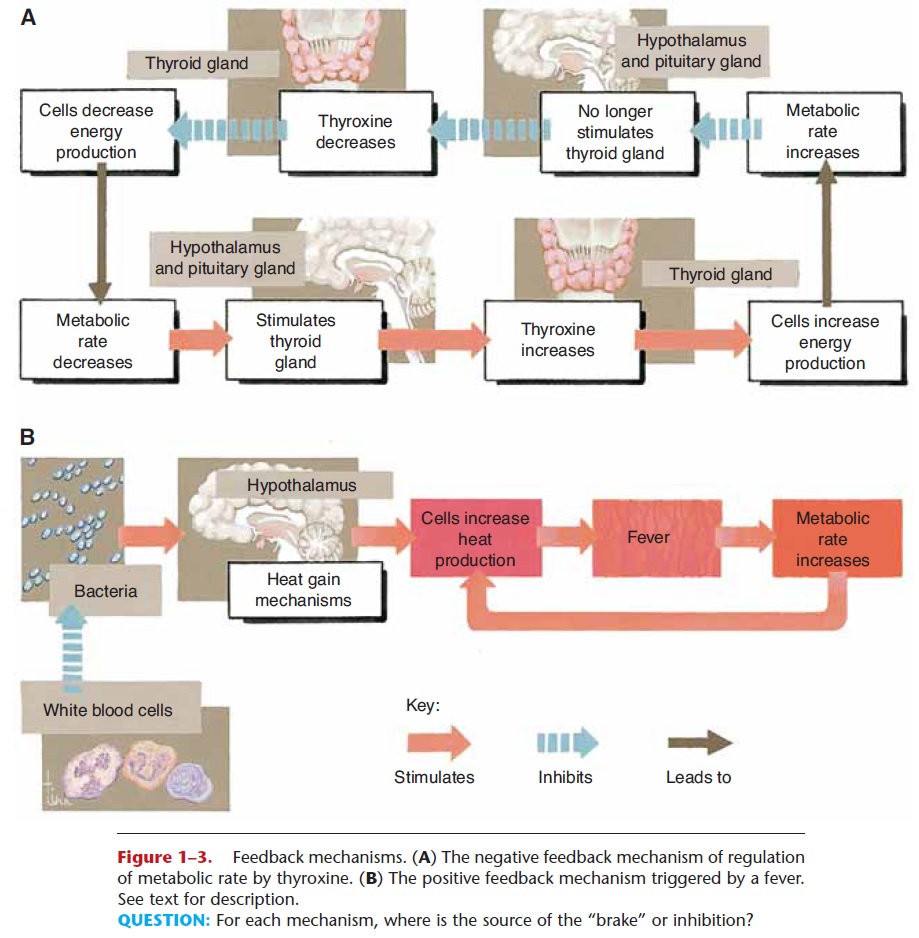