A memory is just like a human brain. It is used to store data and instructions.

A memory is just like a human brain. It is used to store data and instructions. Computer memory is the storage space in the computer, where data and instructions are stored. There are two types of accessing methods to access (read or write) the memory. They are sequential access and random access. In sequential access, the memory is accessed in an orderly manner from starting to end. But, in random access, any byte of memory can be accessed directly without navigating through previous bytes. Different memory devices are arranged according to the capacity, speed and cost as shown in Figure 3.6. 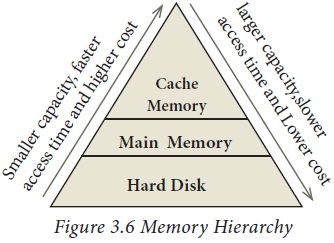 The main memory is otherwise called as Random Access Memory. This is available in computers in the form of Integrated Circuits (ICs). It is the place in a computer where the Operating System, Application Programs and the data in current use are kept temporarily so that they can be accessed by the computer’s processor. The smallest unit of information that can be stored in the memory is called as a bit. The memory can be accessed by a collection of 8 bits which is called as a byte. The bytes are referred by ‘B’. If a computer has 1 megabyte of memory, then it can store 10,48,576 bytes (or characters) of information. [Hence 1MB is 1024KB and 1 KB is 1024 Bytes, So 1024X1024 =10,48,576 Bytes]

RAM is a volatile memory, which means that the information stored in it is not permanent. As soon as the power is turned off, whatever data that resides in RAM is lost. It allows both read and write operations.

There are two basic types of RAM

Read Only Memory refers to special memory in a computer with pre-recorded data at manufacturing time which cannot be modified. The stored programs that start the computer and perform diagnostics are available in ROMs. ROM stores critical programs such as the program that boots the computer. Once the data has been written onto a ROM chip, it cannot be modified or removed and can only be read. ROM retains its contents even when the computer is turned off. So, ROM is called as a non-volatile memory.

Programmable read only memory is also a non-volatile memory on which data can be written only once. Once a program has been written onto a PROM, it remains there forever. Unlike the main memory, PROMs retain their contents even when the computer is turned off.

The PROM differs from ROM. PROM is manufactured as a blank memory, whereas a ROM is programmed during the manufacturing process itself. PROM programmer or a PROM burner is used to write data to a PROM chip. The process of programming a PROM is called burning the PROM.

An EPROM differs from a PROM, PROM can be written only once and cannot be erased. EPROMs are used widely in personal computers because they enable the manufacturer to change the contents of the PROM to replace with updated versions or erase the contents before the computer is delivered. 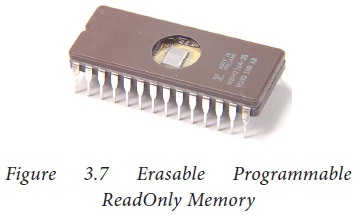 Electrically Erasable Programmable Read Only Memory is a special type of PROM that can be erased by exposing it to an electrical charge. Like other types of PROM, EEPROM retains its contents even when the power is turned off. Comparing with all other types of ROM, EEPROM is slower in performance.

The cache memory is a very high speed and expensive memory, which is used to speed up the memory retrieval process. Due to its higher cost, the CPU comes with a smaller size of cache memory compared with the size of the main memory. Without cache memory, every time the CPU requests the data, it has to be fetched from the main memory which will consume more time. The idea of introducing a cache is that, this extremely fast memory would store data that is frequently accessed and if possible, the data that is closer to it. This helps to achieve the fast response time, Where response Time, (Access Time) refers to how quickly the memory can respond to a read / write request. Figure 3.8 shows the arrangement of cache memory between the CPU and the main memory.