The CPU is the major component of a computer, which performs all tasks.

The CPU is the major component of a computer, which performs all tasks. This is realized by the microprocessor which is an Integrated Circuit. Microprocessors were first introduced in early 1970s. The first general purpose microprocessor, 4004 was developed by Intel Inc.

The microprocessor is a programmable multipurpose silicon chip. It is driven by clock pulses. It accepts input as a binary data and after processing, it provides the output data as per the instructions stored in the memory. A block diagram of a microprocessor based system is shown in Figure 3.1.

The microprocessor is made up of 3 main units. They are:

·     Control unit: To control the overall operations of the computer through signals.

·     Registers (Internal Memory): They are used to hold the instruction and data for the execution of the processor.

The microprocessor is able to communicate with the memory units and the Input / Output devices as in Figure 3.2. The system bus is a bunch of wires which is the collection of address bus, data bus and control bus that serves as communication channels between the Microprocessor and other devices. 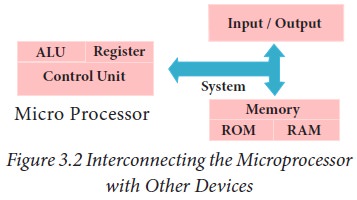 A Microprocessor’s performance depends on the following characteristics:

Hertz – abbreviated as Hz is the standard unit of measurement used for measuring frequency.

Since frequency is measured in cycles per second, one hertz equals one cycle per second.

While hertz can be used to measure wave frequencies, it is also used to measure the speed of computer processors. For example, each CPU is rated at a specific clock speed. This number indicates how many instruction cycles the processor can perform in every second. Since modern processors can perform millions or even billions of instructions per second, clock speeds are typically measured in megahertz or gigahertz.