Membrane Potentials in Smooth Muscle. The quantitativevoltage of the membrane potential of smooth muscle depends on the momentary condition of the muscle.

Membrane Potentials in Smooth Muscle. The quantitativevoltage of the membrane potential of smooth muscle depends on the momentary condition of the muscle. In the normal resting state, the intracellular potential is usually about -50 to -60 millivolts, which is about 30 millivolts less negative than in skeletal muscle.

Action Potentials in Unitary Smooth Muscle. Action poten-tials occur in unitary smooth muscle (such as visceral muscle) in the same way that they occur in skeletal muscle. They do not normally occur in many, if not most, multi-unit types of smooth muscle.

Spike Potentials. Typical spike action potentials, suchas those seen in skeletal muscle, occur in most types of unitary smooth muscle. The duration of this type of action potential is 10 to 50 milliseconds, as shown in Figure 8–4A. Such action potentials can be elicited in many ways, for example, by electrical stimulation, by the action of hormones on the smooth muscle, by the action of transmitter substances from nerve fibers, by stretch, or as a result of spontaneous generation in the muscle fiber itself, as discussed subsequently.

Action Potentials with Plateaus. Figure 8–4Cshows asmooth muscle action potential with a plateau. The onset of this action potential is similar to that of the typical spike potential. However, instead of rapid repolarization of the muscle fiber membrane, the repo-larization is delayed for several hundred to as much as 1000 milliseconds (1 second). The importance of the plateau is that it can account for the prolonged contraction that occurs in some types of smooth muscle, such as the ureter, the uterus under some con-ditions, and certain types of vascular smooth muscle. (Also, this is the type of action potential seen in cardiac muscle fibers that have a prolonged period of contraction.

Another important feature of calcium ion entry into the cells during the action potential is that the calcium ions act directly on the smooth muscle contractile mechanism to cause contraction. Thus, the calcium performs two tasks at once.

Slow Wave Potentials in Unitary Smooth Muscle, and Sponta-neous Generation of Action Potentials. Some smoothmuscle is self-excitatory. That is, action potentials arise within the smooth muscle cells themselves without an extrinsic stimulus. This often is associated with a basic slow wave rhythm of the membrane potential. A typical slow wave in a visceral smooth muscle of the gut is shown in Figure 8–4B. The slow wave itself is not the action potential. That is, it is not a self-regenerative process that spreads progressively over the membranes of the muscle fibers. Instead, it is a local property of the smooth muscle fibers that make up the muscle mass. 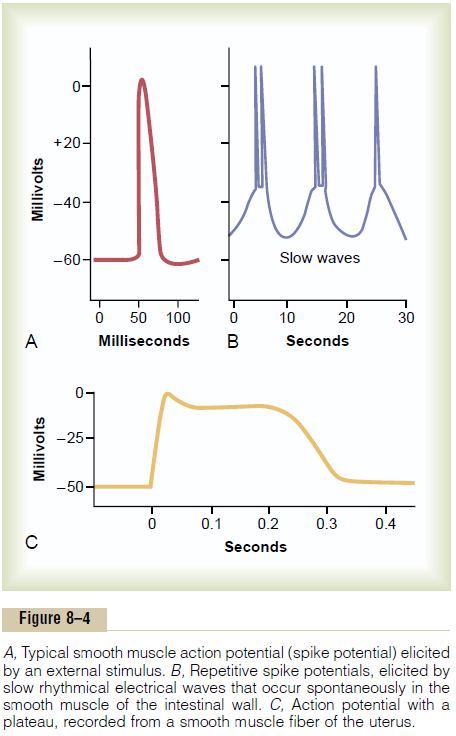 The cause of the slow wave rhythm is unknown. One suggestion is that the slow waves are caused by waxing and waning of the pumping of positive ions (presum-ably sodium ions) outward through the muscle fiber membrane; that is, the membrane potential becomes more negative when sodium is pumped rapidly and less negative when the sodium pump becomes less active. Another suggestion is that the conductances of the ion channels increase and decrease rhythmically.

When visceral (unitary) smooth muscle is stretched sufficiently, spontaneous action potentials usually are generated. They result from a combination of (1) the normal slow wave potentials and (2) decrease in overall negativity of the membrane potential caused by the stretch itself. This response to stretch allows the gut wall, when excessively stretched, to contract auto-matically and rhythmically. For instance, when the gut is overfilled by intestinal contents, local automatic con-tractions often set up peristaltic waves that move the contents away from the overfilled intestine, usually in the direction of the anus.