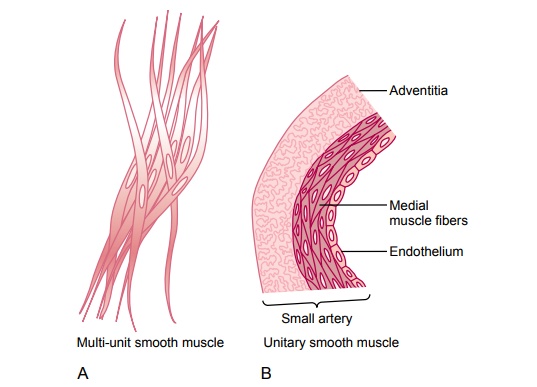 We now turn to smooth muscle, which is composed of far smaller fibers— usually 1 to 5 micrometers in diameter and only 20 to 500 micrometers in length.

The smooth muscle of each organ is distinctive from that of most other organs in several ways: (1) physical dimensions, (2) organization into bundles or sheets, (3) response to different types of stimuli, (4) characteristics of innervation, and (5) function. Yet, for the sake of simplicity, smooth muscle can generally be divided into two major types, which are shown in Figure 8–1: multi-unit smoothmuscle and unitary (or single-unit) smooth muscle. 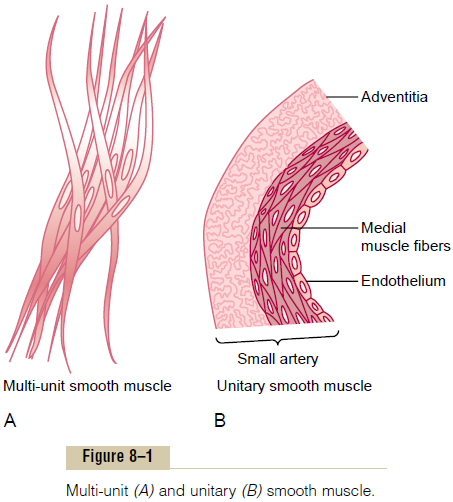 Multi-Unit Smooth Muscle. This type of smooth muscle is composed of discrete,separate smooth muscle fibers. Each fiber operates independently of the others and often is innervated by a single nerve ending, as occurs for skeletal muscle fibers. Further, the outer surfaces of these fibers, like those of skeletal muscle fibers, are covered by a thin layer of basement membrane–like substance, a mixture of fine collagen and glycoprotein that helps insulate the separate fibers from one another.

The most important characteristic of multi-unit smooth muscle fibers is that each fiber can contract independently of the others, and their control is exerted mainly by nerve signals. In contrast, a major share of control of unitary smooth muscle is exerted by non-nervous stimuli. Some examples of multi-unit smooth muscle are the ciliary muscle of the eye, the iris muscle of the eye, and the pilo-erector muscles that cause erection of the hairs when stimulated by the sym-pathetic nervous system.

Unitary Smooth Muscle. The term “unitary” is confusing because it does not meansingle muscle fibers. Instead, it means a mass of hundreds to thousands of smooth muscle fibers that contract together as a single unit. The fibers usually are arranged in sheets or bundles, and their cell membranes are adherent to one another at multiple points so that force generated in one muscle fiber can be transmitted to the next. In addition, the cell membranes are joined by many gapjunctions through which ions can flow freely from one muscle cell to the nextso that action potentials or simple ion flow without action potentials can travel from one fiber to the next and cause the muscle fibers to contract together.

Chemical studies have shown that actin and myosin filaments derived from smooth muscle interact with each other in much the same way that they do in skele-tal muscle. Further, the contractile process is activated by calcium ions, and adenosine triphosphate (ATP) is degraded to adenosine diphosphate (ADP) to provide the energy for contraction.

There are, however, major differences between the physical organization of smooth muscle and that of skeletal muscle, as well as differences in excitation-contraction coupling, control of the contractile process by calcium ions, duration of contraction, and amount of energy required for contraction.

Smooth muscle does not have the same striated arrangement of actin and myosin filaments as is found in skeletal muscle. Instead, electron micrographic tech-niques suggest the physical organization exhibited in Figure 8–2. This figure shows large numbers of actin filaments attached to so-called dense bodies. Some of these bodies are attached to the cell membrane. Others are dispersed inside the cell. Some of the mem-brane dense bodies of adjacent cells are bonded together by intercellular protein bridges. It is mainly through these bonds that the force of contraction is transmitted from one cell to the next.

There is another difference: Most of the myosin fila-ments have what are called “sidepolar” cross-bridges arranged so that the bridges on one side hinge in one direction and those on the other side hinge in the opposite direction. This allows the myosin to pull an actin filament in one direction on one side while simul-taneously pulling another actin filament in the oppo-site direction on the other side. The value of this organization is that it allows smooth muscle cells to contract as much as 80 per cent of their length instead of being limited to less than 30 per cent, as occurs in skeletal muscle.

Slow Cycling of the Myosin Cross-Bridges. The rapidityof cycling of the myosin cross-bridges in smooth muscle—that is, their attachment to actin, then release from the actin, and reattachment for the next cycle— is much, much slower in smooth muscle than in skele-tal muscle; in fact, the frequency is as little as 1/10 to 1/300 that in skeletal muscle. Yet the fraction of time that the cross-bridges remain attached to the actin fila-ments, which is a major factor that determines the force of contraction, is believed to be greatly increased in smooth muscle. A possible reason for the slow cycling is that the cross-bridge heads have far less ATPase activity than in skeletal muscle, so that degra-dation of the ATP that energizes the movements of the cross-bridge heads is greatly reduced, with corresponding slowing of the rate of cycling.

Energy Required to Sustain Smooth Muscle Contraction. Only1/10 to 1/300 as much energy is required to sustain the same tension of contraction in smooth muscle as in skeletal muscle. This, too, is believed to result from the slow attachment and detachment cycling of the cross-bridges and because only one molecule of ATP is required for each cycle, regardless of its duration.

This sparsity of energy utilization by smooth muscle is exceedingly important to the overall energy economy of the body, because organs such as the intes-tines, urinary bladder, gallbladder, and other viscera often maintain tonic muscle contraction almost indefinitely.

Slowness of Onset of Contraction and Relaxation of the Total Smooth Muscle Tissue. A typical smooth muscle tissuebegins to contract 50 to 100 milliseconds after it is excited, reaches full contraction about 0.5 second later, and then declines in contractile force in another 1 to 2 seconds, giving a total contraction time of 1 to 3 seconds. This is about 30 times as long as a single contraction of an average skeletal muscle fiber. But because there are so many types of smooth muscle, contraction of some types can be as short as 0.2 second or as long as 30 seconds.

The slow onset of contraction of smooth muscle, as well as its prolonged contraction, is caused by the slowness of attachment and detachment of the cross-bridges with the actin filaments. In addition, the initiation of contraction in response to calcium ions is much slower than in skeletal muscle, as discussed later.

“Latch” Mechanism for Prolonged Holding of Contractions of Smooth Muscle. Once smooth muscle has developed fullcontraction, the amount of continuing excitation usually can be reduced to far less than the initial level, yet the muscle maintains its full force of con-traction. Further, the energy consumed to maintain contraction is often minuscule, sometimes as little as 1/300 the energy required for comparable sustained skeletal muscle contraction. This is called the “latch” mechanism.

The importance of the latch mechanism is that it can maintain prolonged tonic contraction in smooth muscle for hours with little use of energy. Little con-tinued excitatory signal is required from nerve fibers or hormonal sources.

Stress-Relaxation of Smooth Muscle. Another impor-tant characteristic of smooth muscle, especially the vis-ceral unitary type of smooth muscle of many hollow organs, is its ability to return to nearly its original force of contraction seconds or minutes after it hasbeen elongated or shortened. For example, a sudden increase in fluid volume in the urinary bladder, thus stretching the smooth muscle in the bladder wall, causes an immediate large increase in pressure in the bladder. However, during the next 15 seconds to a minute or so, despite continued stretch of the bladder wall, the pressure returns almost exactly back to the original level. Then, when the volume is increased by another step, the same effect occurs again.

Conversely, when the volume is suddenly decreased, the pressure falls very low at first but then rises back in another few seconds or minutes to or near to the original level. These phenomena are called stress-relaxation and reverse stress-relaxation. Their impor-tance is that, except for short periods of time, they allow a hollow organ to maintain about the same amount of pressure inside its lumen despite long-term, large changes in volume.

Regulation of Contraction by Calcium Ions

As is true for skeletal muscle, the initiating stimulus for most smooth muscle contraction is an increase in intracellular calcium ions. This increase can be caused in different types of smooth muscle by nerve stimula-tion of the smooth muscle fiber, hormonal stimulation, stretch of the fiber, or even change in the chemical environment of the fiber.

Combination of Calcium Ions with Calmodulin—Activation of Myosin Kinase and Phosphorylation of the Myosin Head. Inplace of troponin, smooth muscle cells contain a large amount of another regulatory protein called calmod-ulin. Although this protein is similar to troponin, it isdifferent in the manner in which it initiates contrac-tion. Calmodulin does this by activating the myosin cross-bridges. This activation and subsequent contrac-tion occur in the following sequence:

1.     The calcium ions bind with calmodulin.

2.     The calmodulin-calcium combination joins with and activates myosin kinase, a phosphorylating enzyme.

3.     One of the light chains of each myosin head, called the regulatory chain, becomes phosphorylated in response to this myosin kinase. When this chain is not phosphorylated, the attachment-detachment cycling of the myosin head with the actin filament does not occur. But when the regulatory chain is phosphorylated, the head has the capability of binding repetitively with the actin filament and proceeding through the entire cycling process of intermittent “pulls,” the same as occurs for skeletal muscle, thus causing muscle contraction.

Cessation of Contraction-Role of Myosin Phosphatase.

When the calcium ion concentration falls below a crit-ical level, the aforementioned processes automatically reverse, except for the phosphorylation of the myosin head. Reversal of this requires another enzyme, myosin phosphatase, located in the fluids of thesmooth muscle cell, which splits the phosphate from the regulatory light chain. Then the cycling stops and contraction ceases. The time required for relaxation of muscle contraction, therefore, is determined to a great extent by the amount of active myosin phosphatase in the cell.

Possible Mechanism for Regulation of the Latch Phenomenon

Because of the importance of the latch phenomenon in smooth muscle, and because this phenomenon allows long-term maintenance of tone in many smooth muscle organs without much expenditure of energy, many attempts have been made to explain it. Among the many mechanisms that have been postulated, one of the simplest is the following.

When the myosin kinase and myosin phosphatase enzymes are both strongly activated, the cycling fre-quency of the myosin heads and the velocity of contraction are great. Then, as the activation of the enzymes decreases, the cycling frequency decreases, but at the same time, the deactivation of these enzymes allows the myosin heads to remain attached to the actin filament for a longer and longer proportion of the cycling period. Therefore, the number of heads attached to the actin filament at any given time remains large. Because the number of heads attached to the actin determines the static force of contraction, tension is maintained, or “latched”; yet little energy is used by the muscle, because ATP is not degraded to ADP except on the rare occasion when a head detaches.