A mechanical filter is an obstruction that is set into the water flow to collect the particles and larger objects and allow the water to pass through.

A mechanical filter is an obstruction that is set into the water flow to collect the particles and larger objects and allow the water to pass through. The principle of a mechanical filter is to separate particles from water in a straining plane, either a screen or a bar rack. Particles bigger than the aperture in the screen or the distance between the bars in the rack will be stopped. The simplest type of mechanical filters comprise a static screen, a grating or perforated plate, or a bar rack that is set down into the water  flow. The  screen,  which  has  apertures  or meshes  of  defined  size, will  stop  particles  larger than the aperture/mesh size moving with the water flow; they are caught on the surface of the screen(Fig. 5.1). After a while the screen will gradually become blocked; the head loss will increase until the  screen  is  completely  blocked  with  particles which prevent any water passing through it. This results in an overflow. The same will be the case with a bar rack. Typically bar racks are used to remove larger particles and objects (>15 mm), while screens  can  also  be  used  on smaller  objects (>6 μm). 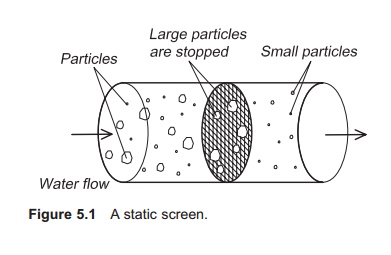 When a screen is used, the particles have to be removed from the surface to avoid blockage. One way to remove them is to manually take the screen up from the water and clean it. This method is very labour intensive and is only used in special cases where the pore size is very large compared to the major  particle  size  in  the  water.  Examples  are removal leaves from the water in the autumn, and stopping other large floating objects from entering the inlet pipe. A major aim when constructing a mechanical filter or screen to be used for removing smaller particles, is therefore to find ways of pre- venting blockage, which means being self-cleaning. The bar rack can be made self-cleaning by using a scraper  mechanism, but  this, as  mentioned, is  a device for removing larger particles. It  is  important  that  the  screen  surface  is smooth so that the particles are not crushed. The screen can be made of perforated plates when the apertures are large (mm or cm). When a screen isused  to  filter  inlet  water  or  outlet  water  in  fish farming, a screen cloth of metal or plastic threads woven to the wanted mesh size is employed. It isimportant that the screen surface is easy to keep clean. 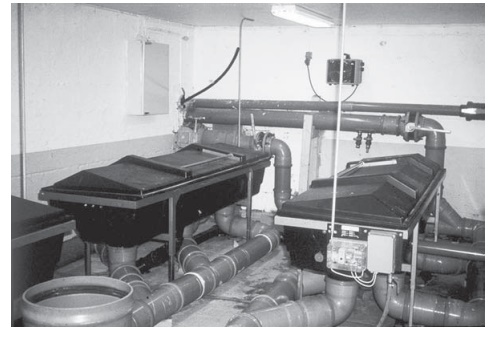 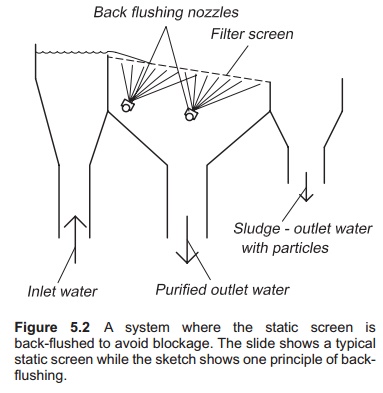 When  using  back-flushing  or  vacuuming  it  is desirable  to  have  as  great  an  area  of  the  new cleaned screen as possible in the water. The screen is used until it gets blocked, when it is removed for cleaning and new cleaned screen cloth is substi- tuted. This process must not be so rapid that the efficiency  is  reduced  or  mechanical  breakdown occurs. One common set-up used in aquaculture is a rotary screen that rotates partly above and partly below the water surface. The meshes in the screen are  cleaned  by  back-flushing  either  with  air  or water when the screen is above the water surface and where the back-flushing water that contains the particles removed from the screen can be collected. Straining or micro screening has been shown to be the most effective cleaning method per unit surface area; in  aquaculture  it  is  especially  effective  for removal of relatively big particles, with the head loss for the water flow through the screen also being quite low.

Rotary screen construction can be classified on the basis of how the screen rotates; various systems are  available,  of  which  the  most  common  are (Fig. 5.3):

An  axial  rotating  screen  is  placed  vertically and  stands  normal  to  the  direction  of  water flow. One common type based on this principle is the disc filter. Which can comprise one or several vertically  installed  filter  plates,  with  a  gradual reduction in the mesh size of the screens. This means that the largest particles are removed on the first screen and smaller ones on subsequent screens. 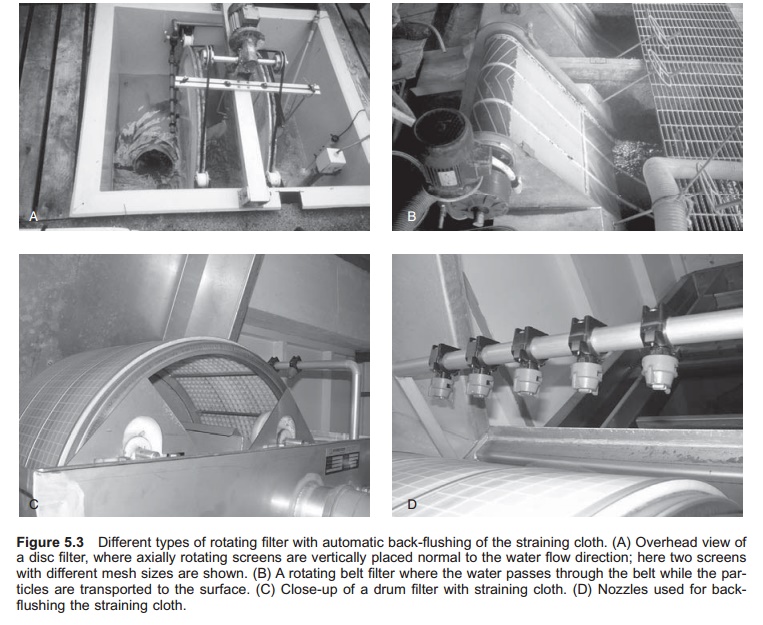 In a radial rotating screen, the flow is radial towards or away from the axis of rotation. A rotat-ing drum is a typical filter using this construction. Water to be purified flows into the drum, which comprises a straining cloth of appropriate mesh size fixed on a frame. The water has to pass through the drum, which means that it must go out normal (radial) to the main flow direction. The particles will be trapped in the straining cloth when flowing through the drum.

Rotary screens, whether axial or radial, are constructed so that the screen operates when only par-tially submerged in the water flow that is to be filtered. Back-flushing of the screen, which is used to clear the mesh and remove trapped particles, is done when the screen is rotating above the water surface. High-pressure water from nozzles is directed on to the screen so the particles are dis-lodged in the same direction that they entered the screen. The back-flush water containing the particles is collected and represents the sludge water from the filter in which the concentration of parti-cles is high. Back-flushing of the straining cloth can be continuous or step-wise: the latter method is most usually used, but choice depends on the load on the filter and the mesh size. The water level in front of the screen can be used to control the rota-tion and back-flushing. When the screen is clogged, the head loss through the straining cloth will increase together with the water level in front of the straining cloth. This increase in water level can be used to start the rotation of the screen and the back-flushing of the straining cloth. It is, however, important to remember that a rotary screen with back-flushing will produce significant quantities of back-flush water. It is also possible to back-flush with hot water to remove the layer of fat that can be created on the screen surface; this is done only from time to time, not on every back-flush, because of the increased costs.

In a rotating belt filter the straining cloth takes the form of a belt stretched out by rollers at both ends. One of the rollers is motorized and causes the belt to rotate partly above and partly below the water surface, so back-flushing and removal of particles is possible on the part of the belt that is above the water surface. Instead of using water for back-flush-ing, air may be used. Air at high pressure is blown on the straining cloth from nozzles and dislodges the particles from the mesh in the opposite direction together with some water; this device is known as an air knife. When using air instead of water, the particle concentration (TS) in the sludge water is increased, but is a more cost effective method.

Another type of filter is the horizontally rotating disc standing above the water surface the water to be filtered comes in from above and trickles through the straining cloth. Particles larger than the mesh size of the cloth will be trapped on the cloth surface and must be removed, possibly by vacuum to avoid flooding. The concentration of particles in the water will then be quite high, i.e. the water has high TS value.

The choice of mesh size depends on the conditions and where the filter is to be used. In inlet water the mesh size may be as small as 20 μm because some parasites will also be removed. On outlet water that is going to a recipient water body, a mesh size between 90 and 100 μm is commonly used. In re-use systems, mesh sizes down to 30 μm are used. Reduction of mesh size will increase the need for new screen cloth exponentially, especially if it is reduced below 60 μm.