Learning Objectives ● To recall the concepts of perimeter and area of square, rectangle, right angled triangle and combined shapes. ● To understand and find the area and perimeter of parallelogram, rhombus and trapezium.

● To recall the concepts of perimeter and area of square, rectangle, right angled triangle and combined shapes.

● To understand and find the area and perimeter of parallelogram, rhombus and trapezium.

In ancient days people used non-standardised measures such as cubit, king’s foot, king’s arm and yard etc. Later, people realised the need for standardised units and International System of Units which were introduced in the year 1971.

The SI Units of various measures are shown in the table

In Class VI, we studied about area and perimeter of rectangle, square and right angled triangle.

Perimeter is the distance around and Area is the region occupied by the closed shape.

Find the missing values for the following:

Area of a rectangle = l × b square units.

(l and b are length and breadth of a rectangle)

Perimeter of a rectangle = 1 × a units

Let us learn about some more four sided shapes that we see around us through the conversation that follows.

Observe the shapes found in the figure

Teacher : Can you tell me the name of the shapes that you see in the figure?

Student : Yes teacher, there is a triangle, square and rectangle

Teacher : What is the shape, numbered 4 in the figure?

Student : The shape looks like a rectangle because the opposite sides are equal and parallel but the adjacent sides do not make right angle. Can we call such shapes as rectangles?

Teacher : Even though the opposite sides are equal and parallel, the adjacent sides do not make right angles instead they make acute and obtuse angles. This shape has a special name called parallelogram. 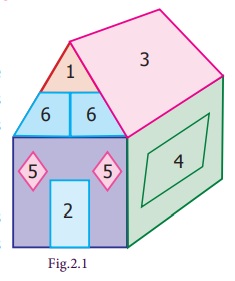 Student : Teacher, can you tell me about shape, numbered 5?

Teacher : Try to tell the properties that you know, then I will help you.

Student : Shape 5 has all the sides equal and looks like a square but the adjacent sides do not make right angles. Is there any special name for such shapes.

Teacher : Yes, it has a special name called rhombus. What about the shape, numbered 6?

Student : Shape 6 does not have any of the properties of square and rectangle. But one pair of opposite sides are parallel. Does this also have a different name?

Teacher : Yes, it is called trapezium.

Now, let us learn about all the three new shapes namely parallelogram, rhombus and trapezium.