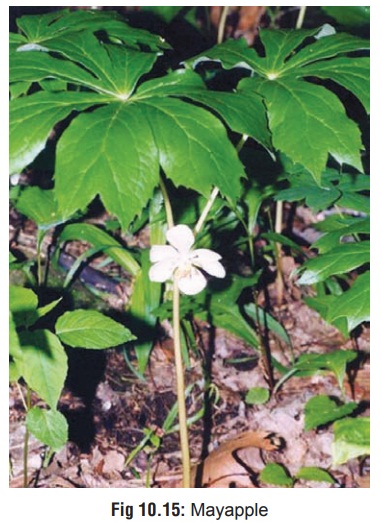 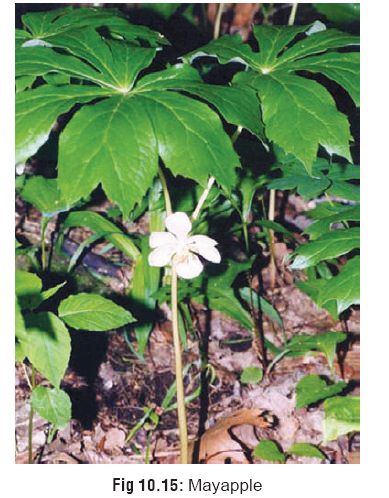 ·              Podophyllin (purified form: podophyllotoxin): Podophyllum is an amorphous caustic powder which is light brown to greenish-yellow or brownish-grey in colour having a characteristic odour, and is a mixture of at least 16 physiological compounds divided into two groups: lignans (wood extracts) and flavonols. It is present in the rhizomes and roots of the plant, and contains at least 50% podophyllotoxin. Commercial preparations usually contain 25% podophyllum resin in either tincture of benzoin, or 10% benzoin and 72% isopropanol. Both podophyllum and podophyllotoxin have a colchicine-like and vinblastine-like effect, resulting in the following chemical effects:

1.   Podophyllum and its resin are used as keratolytic agents whose caustic action is thought to be caused by the arrest of mitosis in metaphase.

3.   Podophyllum is also used in Homoeopathy.

Ingestion or dermal application could both result in toxicity. The toxicity associated with podophyllum is colchicine-like, arresting cellular mitosis in metaphase. Symptoms generally begin 30 minutes to several hours following ingestion, and 12 to 24 hours after dermal absorption.

·      After a few days, pancytopenia and hepatic dysfunction may occur, which generally resolves in 2 to 3 weeks.

·      It has been suggested that podophyllum should not be used during pregnancy for the treatment of genital warts due to the potential for severe myelotoxicity and neurotoxicity in the mother. Also, there are indications that podophyllum may be teratogenic and carcinogenic. Squamous cell carcinoma-like changes have been reported following the dermal use of podophyllum in humans.

·      Gastric decontamination: Emesis is not indicated. Activated charcoal can help.

·      For hypotension: Infuse 10 to 20 ml/kg of isotonic fluid and place in Trendelenburg position. If hypotension persists, administer dopamine or noradrenaline.

·      Monitor electromyography and nerve conduction velocity in all patients with symptoms of peripheral neuropathy.

·      Patients generally recover from thrombocytopenia and leukopenia within 1 month. Granulocyte colony-stimulating factor (G-CSF), or filgrastim may be effective in acceler-ating recovery from neutropenia following podophyllum poisoning.

·      Due to the large molecular weight of the compound it is unlikely that haemodialysis would be effective for removal of podophyllum. Early charcoal or resin haemoperfusion has been suggested by some investigators to be useful in facilitating neurological recovery in some patients. But there is no conclusive evidence regarding its usefulness.

In one reported case, postmortem examination revealed partial maturation arrest of granulocytopoesis and a severe decrease in megakaryocytes. There were multiple petechiae on the pleura, the peritoneal surfaces of many organs, and the gastric mucosa. Severe pulmonary congestion was present, as well as marked vascular congestion of the liver and kidneys. There was a small area of focal acute necrotising bronchial pneumonia, and the brain was oedematous.