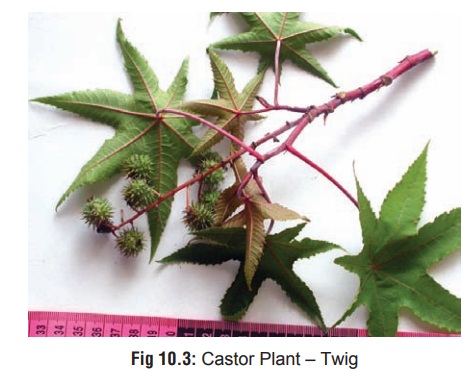 ·              This plant belonging to family Euphorbiaceae, is a vigorous, perennial, erect, branched plant (Fig 10.3), and is native to India, but is also encountered throughout the world in temperate and tropical climates. Dwarf forms are typically less than 2 metres in height, but most plants become tree-like with stout, fibrous roots and soft, woody, stems reaching a height of 6 to 9 metres. 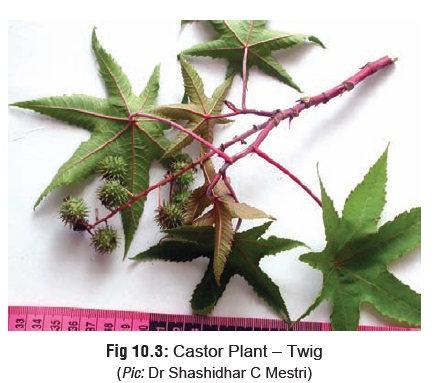 ·              Leaves have long, green or reddish stalks, and may be quite large (up to 1 metre across). They are generally notched into 5 to 11 palmate lobes with toothed margins.

·              Clusters of greenish-white to rust coloured flowers form at the end of the branches on 6 to 12 inch long upright stems. Male and female flowers are separate, but on the same plant.

·     The fruit (seed pod) has a prickly capsule (Fig 10.4) and contains (usually) three shiny, mottled, hard-coated, greyish-brown seeds (Fig 10.5). Seed pods are green or red, about one inch long, and hold elliptical, glossy seeds, which may be mottled with black, brown, grey, or white colours, and are 1 to 2 cm in length. 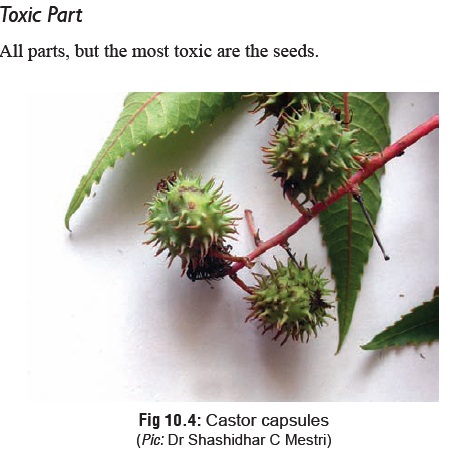 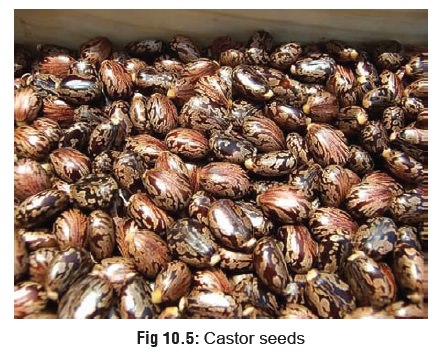 2.   Oil extracted from the seeds is used medicinally as a purga-tive, and as a lubricant for engines.

3.   Castor beans have found wide use, both systemically and topically, in stimulating breast milk production in many countries.

4.   Ricin (the main active principle) has been used as a chemical warfare agent, a reagent for pepsin and trypsin, an experimental antitumour and immunosuppressive agent, and as a commercial mole killer.

All parts, but the most toxic are the seeds.

·     The main toxic principle is the phytotoxin ricin which is a toxalbumen. It is not present in castor oil which contains a much milder irritant—ricinoleic acid. Ricin is one of the supertoxic poisons of plant origin.*

·              Toxalbumens cause severe gastrointestinal lesions with irritation of the oropharynx, oesophagus, or stomach when directly exposed. Although clinically similar to alkaline caustic burns, they are usually delayed two or more hours after exposure. Late complications result from cytotoxic effects on the liver, central nervous sytem, kidney, and adrenal glands, typically 2 to 5 days after exposure. The patient may be asymptomatic during the preceding 1 to 5 days.

·              The seeds are harmless when ingested whole, since the outer coating resists digestion. However, if the seeds are crushed or chewed before swallowing, toxicity results due to the release of ricin. Poisoning is much more severe when ricin is injected parenterally.

·              Ricin contains two polypeptide chains (A and B) held together by a single disulfide bond; the total molecular weight is 66,000. Chain B is a lectin that binds to the surface of the cell to facilitate toxin entry into the cell. Chain A disrupts protein synthesis by activating the 60S ribosomal sub-unit. Sensitisation to castor bean (IgE response) may occur, with the main allergen being a 25 storage albumin (proposed name Ric cI). Both Type 1 (immediate) and Type IV (delayed) reac- tions have been reported.

·              Haemagglutination has been seen in animal and laboratory work, but is almost never seen in actual poisonings. It is now believed that the haemagglutinating agent is not ricin, but another lectin (sometimes called ricine).

·              The pulp of the seed contains allergenic glycoproteins which cause allergic dermatitis, rhinitis, and asthma in sensitised individuals.

1.   There is usually a delay of several hours before manifesta-tions begin. There is at first a burning sensation in the GI tract which is followed by colicky abdominal pain, vomiting, and diarrhoea. Frequent stools, including bloody diarrhoea and tenesmus, are well known signs of toxalbumin toxicity.

·              It is generally believed that ingestion of a single castor seed can be lethal, whereas actually 8 to 10 seeds are required to produce a fatal outcome. However, even a single seed can occasionally cause death due to anaphylaxis.

·              Parenteral injection of ricin can be fatal with a dose as low as 1 mg/kg body weight. But even ricin is a poorly absorbed substance, and it may take up to 5 days for toxic effects to manifest fully.

The latent period between exposure and systemic symptoms requires observation for 8 hours following any substantial exposure to ricin.

2.   Supportive measures: IV fluids, monitoring for hypogly-caemia, haemolysis, and complications of hypovolaemia. Alkalinisation of urine probably has a role in preventing crystallisation of haemoglobin, and should be considered in severe poisonings.

3.   Many antidotes have been investigated, but no specific treatments are available for toxalbumen exposures. Various antibodies have been developed, but are not used clinically.

·              Reports from some countries suggest that it is not unusual to find a clustering of cases of toxic gastroenteritis among young children who ingest the seeds of castor. It is presumed that the unique marbled pattern of the seeds may be very attractive to children, and that the multiple seeds found in the pod may be shared between several children.

·              The exaggerated notion about the lethality of castor (and more particularly ricin) stems from the celebrated case of Georgi Markov:

Georgi Markov (Fig 10.6) was a 49 year old Bulgarian who had defected to the West, and was working as a broadcaster for the BBC World Service in London. On September 7, 1978, he was waiting for his evening bus home on Waterloo Bridge when a sharp jab in his right thigh caused him to turn in surprise. The man behind him dropped his furled umbrella (the tip of which had appar- ently accidentally poked into him), apologised, and moved away. He subsequently hailed a taxicab and left the scene. Puzzled and a little concerned, Markov caught his bus home. Late that night he fell ill with fever and vomiting. Next morning, his wife called their family doctor over who became quite alarmed at Markov’s condition and rushed him to hospital. By now there was suspicion that his illness was connected somehow to the incident at the bus stop the previous day. The puncture wound in his thigh had become inflamed and painful. The body temperature rose relentlessly and septicaemia was diagnosed. Over the weekend Markov became delirious, passed into coma, and died shortly thereafter. 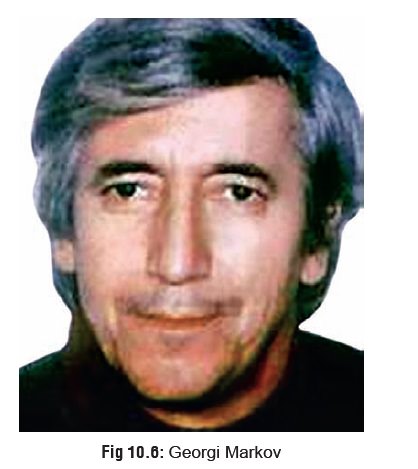 ·  Owing to the circumstances of the death, a high-level police investigation was launched. An autopsy was ordered, during the course of which the tissues around the puncture wound in the thigh were dissected and revealed the presence of a tiny pellet, the size of a pinhead. Electron microscopy revealed the pellet (made of an alloy of platinum and iridium) to have two small holes bored through it (Fig 10.7). To drill holes 0.35 mm wide in a pellet of 1.5 mm diameter, made of a notably hard substance, plainly indicated the involvement of someone with access to highly specialised equipment. The position of the pellet in the body suggested that the mysterious assailant’s umbrella must have also been equally specialised. Investigators surmised that there must have been a firing device in the ferrule, silently powered by a gas cylinder. 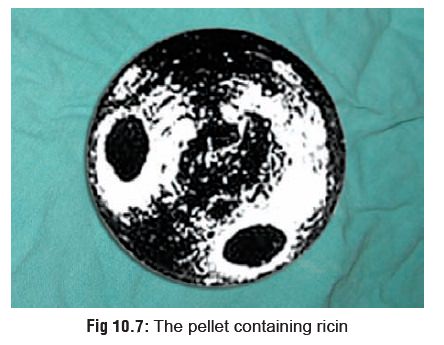 Chemical analysis of the pellet did not reveal the pres-ence of any poison. However, experimental injection of laboratory animals with a few of the known “supertoxic” poisons suggested the possibility of ricin. The negative chemical analysis only reinforced this possibility, since ricin is known to get degraded rapidly in the body leaving behind no trace of its original presence.

The assassin with his lethal umbrella was never caught.