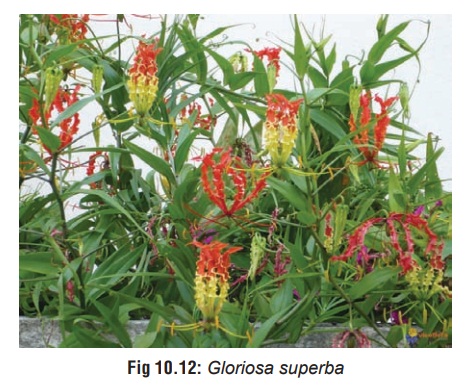 This plant belonging to family Liliaceae is a large, herba- ceous, climbing annual.

■■   It is a slender vine with a thick tuberous root, resembling a sweet potato.

■■   Flowers are large, solitary, yellow or red, crinkled, and long-stalked (Fig 10.12). They appear to be “upside-down”, with the stamens and pistils pointing downward. 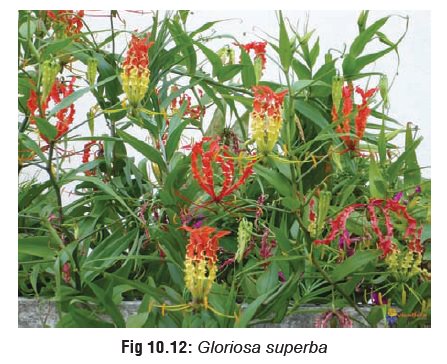 ·      The juice from the leaves is used as a pediculoside (to kill head lice).

·       The root is used to treat various ailments in folk medicine.

Root contains colchicine and gloriosine. The tubers contain an estimated 6 mg/10 gm of tuber of colchicine along with gloriosine, which is a related alkaloid.

·      Acute colchicine overdose results in severe toxicity which may be delayed 2 to 12 hours postingestion. Toxic effects occur in three phases.

·              Second Phase (24 to 72 hours): Multisystem failure,with fever and neurological (confusion, coma, ascending peripheral neuropathy), pulmonary, renal, hepatic, haema-tological, and cardiovascular toxicity. Seizures have been reported in children. Death may occur from respiratory failure, cardiovascular collapse, or sudden asystole. Sepsis is a common cause of death at 3 to 7 days.

·              Third Phase (7 to 10 days): Phase of recovery, and ischaracterised by a rebound leukocytosis and reversible alopecia. Fever may persist for several weeks.

The estimated fatal dose of pure colchicine is 7 to 60 mg. The colchicine content of tubers of Gloriosa superba is approxi-mately 0.3%. A potentially lethal amount would therefore be contained in 2.5 to 5 grams of tubers.

o     Analgesics or opiates (with an anticholinergic drug if necessary) may be used to control severe abdominal pain.

·              Accidental poisoning may occur when the tuber of Gloriosasuperba is mistaken for sweet potato.