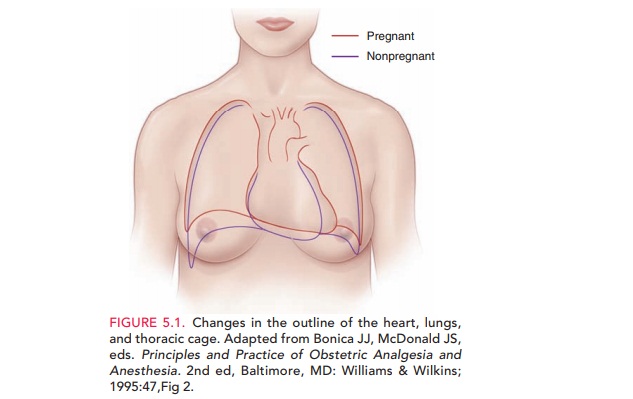 During pregnancy, the heart is displaced upward and to the left and assumes a more horizontal position as its apex is moved laterally (Fig. 5.1).

The earliest and most dramatic changes in maternal physiology are cardiovascular. These changes improve fetal oxygena-tion and nutrition.

During pregnancy, the heart is displaced upward and to the left and assumes a more horizontal position as its apex is moved laterally (Fig. 5.1). These position changes are the result of diaphragmatic elevation caused by displace-ment of abdominal viscera by the enlarging uterus. In addition, ventricular muscle mass increases and both the left ventricle and atrium increase in size parallel with an increase in circulating blood volume. 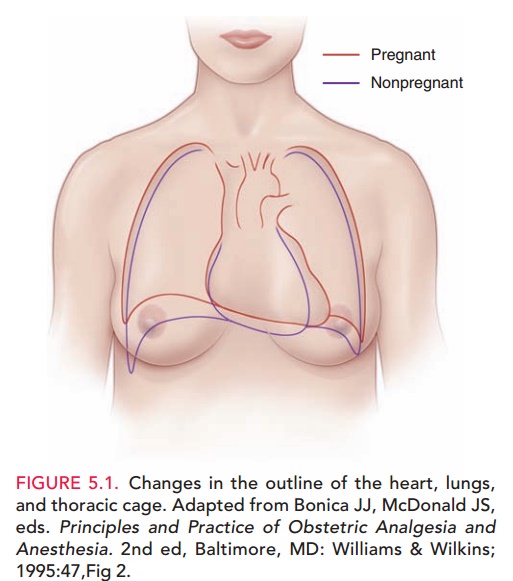 The primary functional change in the cardiovascular system in pregnancy is a marked increase in cardiac output.

Overall, cardiac output increases 30% to 50%, with 50% of that increase occurring by 8 weeks’ gestation. In the first half of pregnancy, cardiac output rises as a result of increased stroke volume, and in the latter half of preg-nancy, as a result of increased maternal heart rate while the stroke volume returns to near-normal, nonpregnant levels. These changes in stroke volume are due to alter-ations in circulating blood volume and systemic vascular resistance. Circulating blood volume begins increasing by 6 to 8 weeks’ gestation and reaches a peak increase of 45% by 32 weeks’ gestation. Systemic vascular resistance decreases because of a combination of the smooth muscle-relaxing effect of progesterone, increased production of vasodilatory substances (prostaglandins, nitric oxide, atrial natriuretic peptide), and arteriovenous shunting to the uteroplacental circulation.

However, late in pregnancy, cardiac output may decrease when venous return to the heart is impeded because of vena caval obstruction by the enlarging gravid uterus. At times, in term pregnancy, nearly complete occlu-sion of the inferior vena cava occurs, especially in the supine position, with venous return from the lower extremities shunted primarily through the dilated paravertebral collat-eral circulation.

During pregnancy, arterial blood pressure follows a typical pattern. When measured in the sitting or stand-ing position, diastolic blood pressure decreases begin-ning in the 7th week of gestation and reaches a maximal decline of 10 mm Hg from 24 to 32 weeks. Blood pres-sure then gradually returns to nonpregnant values by term. Resting maternal pulse increases as pregnancy pro-gresses, increasing by 10–18 beats per minute over the nonpregnant value by term.

During labor, at the time of uterine contraction, car-diac output increases approximately 40% above that in late pregnancy, and mean arterial pressure increases by approx-imately 10 mm Hg. A decline in these parameters follow-ing administration of an epidural anesthetic suggests that many of these changes are the result of pain and apprehen-sion. Cardiac output increases significantly immediately after delivery, because venous return to the heart is no longer blocked by the gravid uterus impinging on the vena cava and because extracellular fluid is quickly mobilized.

Although most women do not become overtly hypoten-sive when lying supine, perhaps one in 10 have symptoms that include dizziness, light-headedness, and syncope. These symptoms, often termed the inferior vena cava syn-drome, may be related to ineffective shunting via the paravertebral circulation when the gravid uterus occludes the inferior vena cava.

The cardiovascular system is in a hyperdynamic state dur-ing pregnancy. Normal physical findings on cardiovascularexamination include an increased second heart sound splitwith inspiration, distended neck veins, and low-grade sys-tolic ejection murmurs, which are presumably associated withincreased blood flow across the aortic and pulmonic valves. Manynormal pregnant women have an S3 gallop, or third heart sound, after midpregnancy. Diastolic murmurs should not be considered normal in pregnancy.

Serial blood pressure assessment is an essential component of each prenatal care visit.

Blood pressure recordings during pregnancy are influ-enced by maternal position; therefore, a consistent position should be used during prenatal care, facilitating the recog-nition of trends in blood pressure during pregnancy and their documentation. Measured blood pressure is highest whena pregnant woman is seated, somewhat lower when supine, and lowest while lying on the side. In the lateral recumbent posi-tion, the measured pressure in the superior arm is about 10 mm Hg lower than that simultaneously measured in the inferior arm. Blood pressures higher than the nonpregnant values for a particular patient should be presumed abnor-mal pending evaluation.

The normal anatomic changes of the maternal heart in pregnancy can produce subtle, but insignificant, changes in chest radiographs and electrocardiograms. In chest radio-graphs, the cardiac silhouette can appear enlarged, causing a misinterpretation of cardiomegaly. In electrocardiograms, a slight left axis deviation may be apparent. 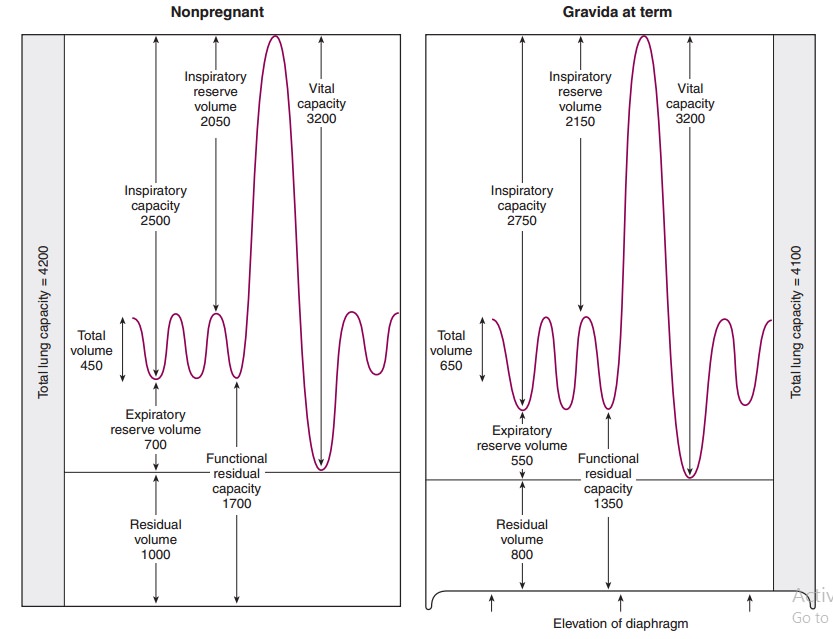