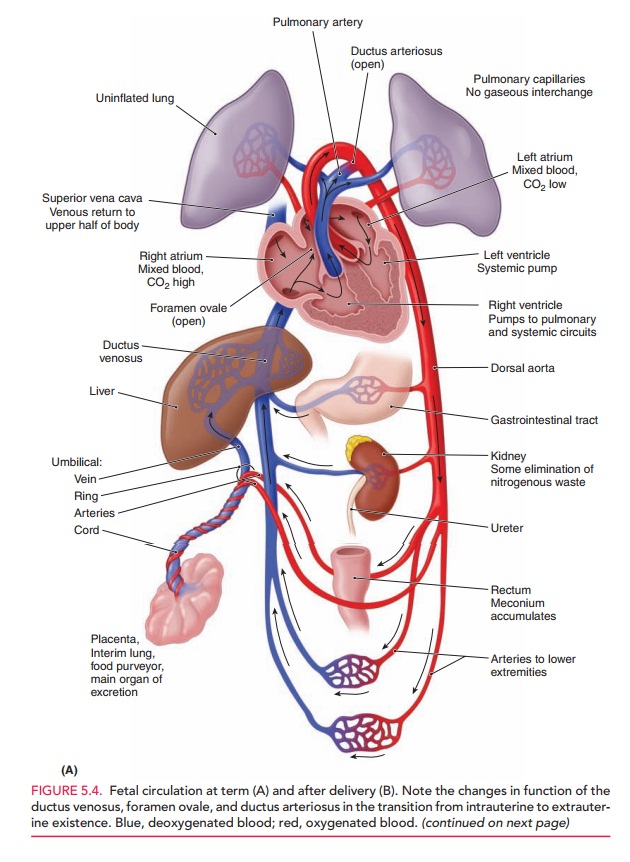 The placenta is an essential and unique “organ of preg-nancy,” with key functions in respiratory and metabolite exchange and in hormone synthesis and regulation.

The placenta is an essential and unique “organ of preg-nancy,” with key functions in respiratory and metabolite exchange and in hormone synthesis and regulation. It is the crucial point of connection between the mother and fetus. The placenta allows the fetus to live and grow until it is mature and able to survive in the outside world.

All gases involved in fetal respiration cross the placenta by simple diffusion. Fetal uptake of O2 and excretion of CO2 depend on the blood-carrying capacities of the mother and fetus for these gases and on the associated uterine and umbilical blood flows.

The single primary metabolic substrate for placental metab-olism is glucose. It is estimated that as much as 70% of theglucose transferred from the mother is used by the placenta. The glucose that crosses the placenta does so by facilitated diffusion. Other solutes that are transferred from the mother to the fetus depend on the concentration gradient as well as on their degree of ionization, size, and lipid solu-bility. There is active transport of amino acids, resulting in levels that are higher in the fetus than in the mother. Free fatty acids have very limited placental transfer, resulting in levels that are lower in the fetus than in the mother.

The placenta also produces estrogen, progesterone, hCG, and hPL. These hormones are important for the maintenance of pregnancy, for labor and delivery, and for lactation.

Oxygenation of fetal blood occurs in the placenta rather than in the fetal lungs. This oxygenated blood (80% saturated) iscarried from the placenta to the fetus through the umbili-cal vein, which enters the portal system of the fetus and branches off to the left lobe of the liver (Fig. 5.4). The umbilical vein then becomes the origin of the ductus veno-sus. Another branch joins the blood flow from the portal vein to the right lobe of the liver. Fifty percent of the umbilical blood supply goes through the ductus venosus. The blood flow from the left hepatic vein is mixed with the blood in the inferior vena cava and is directed toward the foramen ovale. Consequently, the well-oxygenated umbil-ical vein blood enters the left ventricle. Less-oxygenated blood in the right hepatic vein enters the inferior vena cava and then flows through the tricuspid valve into the right ventricle. Blood from the superior vena cava also prefer-entially flows through the tricuspid valve to the right ven-tricle. Blood from the pulmonary artery primarily flows through the ductus arteriosus into the aorta. 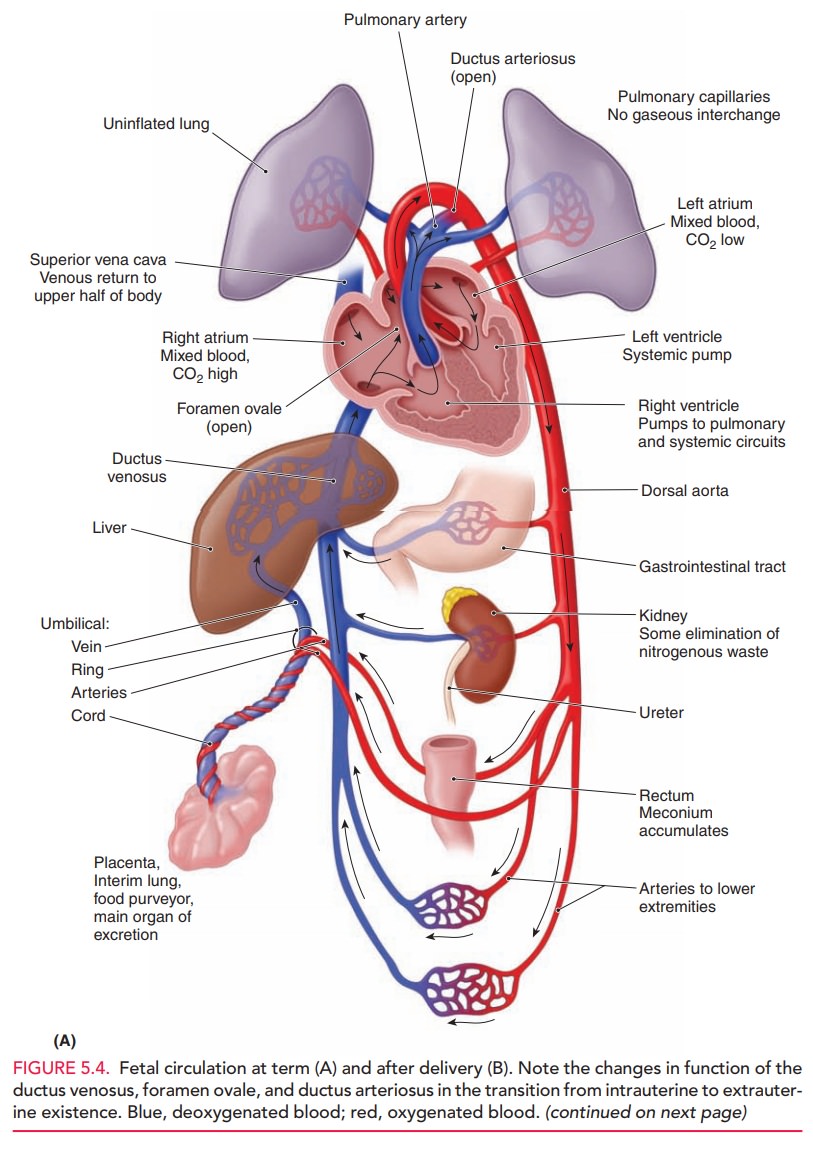 The fetal ventricles work in a parallel circuit, with blood flow from the right and left unequally distributed to the pulmonary and systemic vascular beds. Within a fetal heart rate range of 120 to 180 bpm, the fetal cardiac out-put remains relatively constant. Overall, less than 10% of right ventricular cardiac output goes to the fetal lungs. The remainder of the right ventricular cardiac output is shunted through the ductus arteriosus to the descending aorta. Output from the left ventricle into the proximal aorta supplies highly saturated blood (65% saturated) to the brain and upper body. Once joined by the ductus arte-riosus, the descending aorta then supplies blood to the lower portion of the fetal body, with a major portion of this blood being delivered to the umbilical arteries, which carry deoxygenated blood to the placenta. 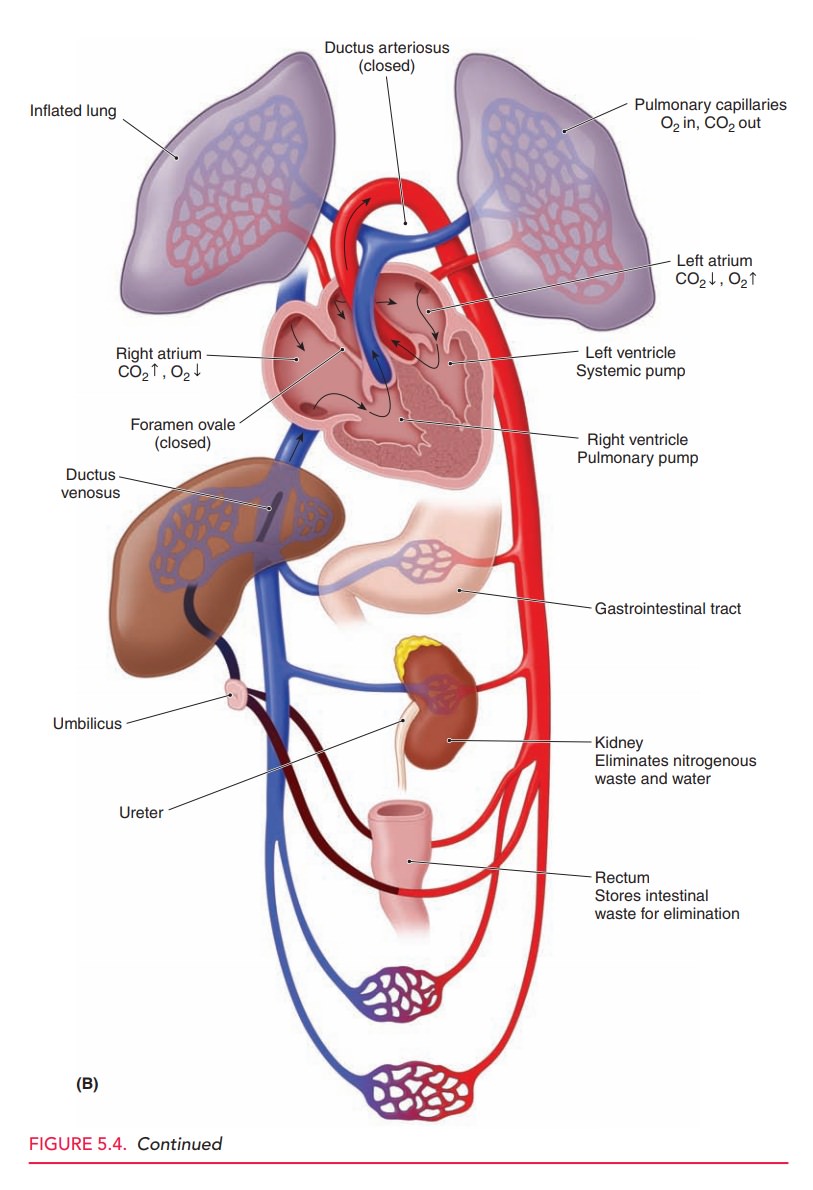 Fetal hemoglobin, like adult hemoglobin, is a tetramer composed of two copies of two different peptide chains. But unlike adulthemoglobin A (Hgb A), which is com-posed of α and β chains, fetal hemoglobin is composed of a series of different pairings of peptide chains that change as embryonic and fetal development progresses. In late fetal life, hemoglobin F (Hgb F), composed of 2 α chains and 2 β chains, predominates. The key physiologic differencebetween adult Hgb A and fetal Hgb F is that, at any given oxy-gen tension, Hgb F has higher oxygen affinity and oxygen sat-uration than Hgb A. The main reason for this functionaldifference is that Hgb A binds 2,3-DPG (diphosphoglyc-erate) more avidly than Hgb F. 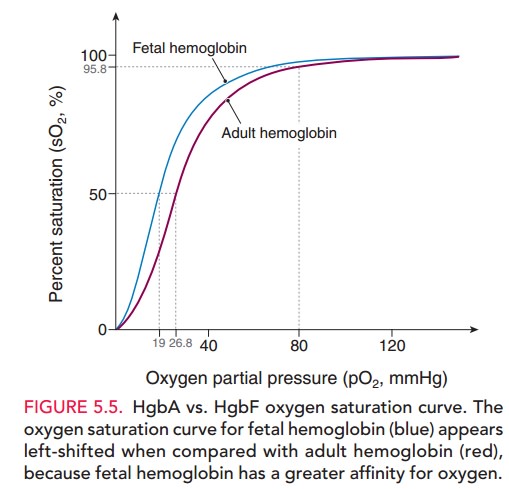 The fetal kidney becomes functional in the 2nd trimester, producing dilute, hypotonic urine. The rate of fetal urine production varies with fetal size and ranges from 400 to 1200 mL/day. Fetal urine becomes the primary source of the amniotic fluid by the middle of the 2nd trimester.

As a consequence, during fetal life, bilirubin is primarily eliminated through the pla-centa. Hepatic production of coagulation factors is deficient and may be attenuated in newborn life due to vitamin K deficiency. Routine neonatal administration of vitamin K prevents newborn hemorrhagic disorders.

The fetal thyroid gland develops without direct influence from the mother, becoming functional by the end of the first trimester, so that, thereafter, levels of fetal T3, T4, and TBG increase throughout the rest of gestation. Theplacenta does not transport the thyroid-stimulating hormone, and only moderate amounts of T3 and T4 cross the placenta. Themother is the primary source of the thyroid hormone for the fetus prior to 24–28 weeks of gestation.

The primordial germ cells migrate during the eighth week of gestation from the endoderm of the yolk sac to the gen-ital ridge. At this point, the gonads are undifferentiated. Differentiation into the testes occurs 6 weeks after con-ception, if the embryo is 46, XY. This testicular differen-tiation appears to depend on the presence of the H–Y antigen and the Y chromosome. If the Y chromosome is absent, however, an ovary develops from the undifferen-tiated gonad. Development of the fetal ovary begins at approximately 7 weeks. The development of other genital organs depends on the presence or absence of specific hor-mones and is independent of gonadal differentiation. If the fetal testes are present, testosterone and the mülle-rian inhibitory factor inhibit the development of female external genitalia. If these two hormones are not present, the female genitalia develop, with regression of the wolffian ducts.