Manufacturing is an important commercial activity, carried out by companies that sell products to customers. The type of manufacturing performed by a company depends on the kinds of products it makes. Let us first take a look at the scope of the manufacturing industries and then consider their products.

Manufacturing is an important commercial activity, carried out by companies that sell products to customers. The type of manufacturing performed by a company depends on the kinds of products it makes. Let us first take a look at the scope of the manufacturing industries and then consider their products. 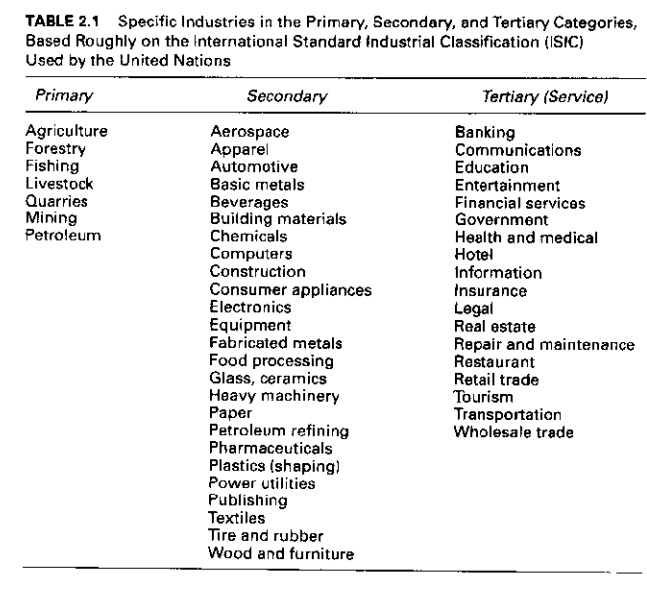 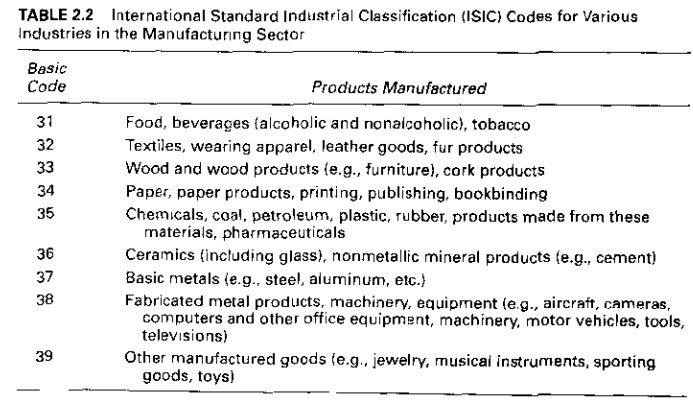 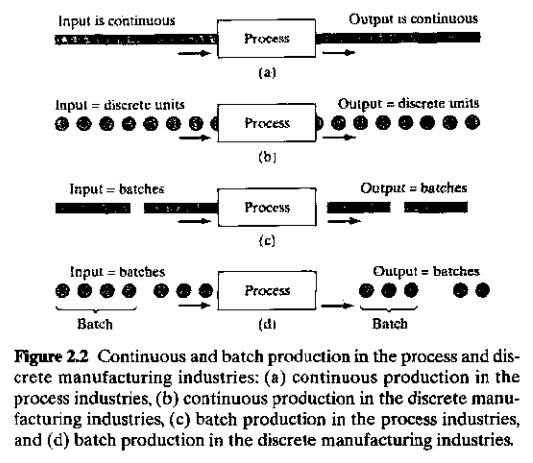 because the nature of the process requires that only a finite amount of material can be accommodated at one time (e.g., the amount of material might be limited by the size of the container used in processing) or because there are differences between the parts or products made in different batches (e.g., a batch of 20 units of part A followed by a batch of 50 units of part B in a machining operation, where a setup changeover is required between batches because of differences in tooling and fixturing required). The differences in batch production between the process and discrete manufacturing industries are portrayed in Figure 2.2(c) and (d). Batch production in the process industries generally means that the starting materials are in liquid or bulk form, and they are processed altogether as a unit. By contrast, in the discrete manufacturing industries, a batch is a certain quantity of work units, and the work units are usually processed one at a time rather than altogether at once. The number of parts in a batch can range from as few as one to as many as thousands of units.

Manufactured Products. As indicated in Table 2.2, the secondary industries include food, beverages, textiles, wood, paper, publishing, chemicals, and basic metals (ISIC codes 31–39). The scope of our book is primarily directed at the industries that produce discrete products (ISIC codes 38 and 39). The two groups interact with each other, and many of the concepts and systems discussed in the book are applicable to the process industries, but our attention is mainly on the production of discrete hardware, which ranges from nuts and bolts to cars, airplanes, and digital computers. Table 2.3 lists the manufacturing industries and corresponding products for which the production systems in this book are most applicable.

Final products made by the industries listed in Table 2.3 can be divided into two major classes: consumer goods and capital goods. Consumer goods are products purchased directly by consumers, such as cars, personal computers, TVs, tires, toys, and tennis rackets. Capital goods are products purchased by other companies to produce goods and supply services. Examples of capital goods include commercial aircraft, mainframe computers, machine tools, railroad equipment, and construction machinery.

In addition to final products, which are usually assembled, there are companies in industry whose business is primarily to produce materials, components, and supplies for the companies that make the final products. Examples of these items include sheet steel, bar stock, metal stampings, machined parts, plastic moldings and extrusions, cutting tools, dies, molds, and lubricants. Thus, the manufacturing industries consist of a complex infrastructure with various categories and layers of intermediate suppliers that the final consumer never deals with.