Management of Hyperlipidemias With Drugs

MANAGEMENT OF HYPERLIPIDEMIAS WITH DRUGS

The statin family of six closely related hypocholes-terolemic drugs are all potent competitive inhibitors of the enzyme 3-hydroxy-3-methylglutaryl coenzyme A re-ductase (HMG CoA reductase), the rate-limiting en-zyme in cholesterol biosynthesis. The liver is their target organ, and decreased hepatic cholesterol synthesis ulti-mately leads to increased removal of LDL particles from the circulation. As a consequence, all other hypocholes-terolemic drugs have been relegated to secondary status.

Clinical trials with lovastatin (Mevacor), simvastatin (Zocor) and pravastatin (Pravachol) provided much of the evidence supporting the observation that lowering of blood cholesterol lowers the risk of CHD.

Reductions in CHD risk appear to be due to multiple consequences of inhibiting the cholesterol synthesis pathway. Drug-induced inhibition of hepatic cholesterol synthesis leads to lowering of liver cholesterol concen-trations and feedback up-regulation at the gene level of both HMG CoA reductase and the LDL receptor (mechanisms IV and VII in Fig. 23.2). As long as the statin is present at adequate concentration in the liver, the extra HMG CoA reductase activity is not ex-pressed. However, the increased hepatic LDL receptor protein results in increased rates of removal of LDL particles from the circulation by the liver, lowering of blood LDL-cholesterol levels, slowing of athero-sclerosis, and decreased risk of heart attack. An overview of lipoprotein metabolism and the sites where drugs can influence plasma lipoprotein levels is pro-vided in Figure 23.2. 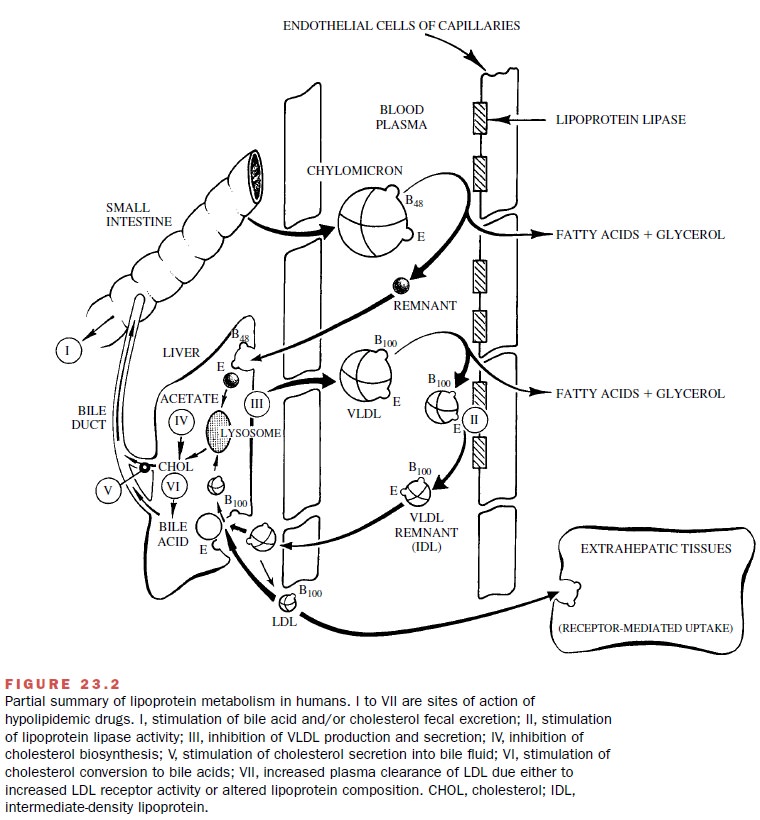 The reduced risk of CHD achieved with the statins may also be due to drug actions independent of lower-ing blood cholesterol. Many important molecules be-sides cholesterol are generated by intermediates in the complex cholesterol synthesis pathway. These include the isoprenes geranylgeranyl and farnesyl, which are co-valently attached to some proteins (isoprenylation) and target them to membranes where they function.

With the possible exception of atorvastatin, the statins are used to lower LDL cholesterol in familial or polygenic ( multifactorial) hypercholesterolemia (type IIa) and in combination with triglyceride-lowering drugs to treat combined hyperlipidemia (type IIb) when both LDL and VLDL (very low density lipoproteins) are elevated (Table 23.2). However, the statins probably should not be given with the fibrates (triglyceride-lowering drugs, discussed later), since this combination may greatly increase statin toxicity. Atorvastatin, the most potent of the available statins (Fig. 23.3), has also been shown to lower blood triglycerides significantly.

This effect may be due to decreasing hepatic choles-terol and cholesterol ester levels to such an extent that hepatic formation of VLDL is impaired. The statins also have been claimed to reduce blood cholesterol levels modestly in some patients with homozygous familial hy-percholesterolemia, a condition often fatal in childhood or in early adulthood.

The statins may lower the risk of CHD by decreasing inflammation, an important component of atherogene-sis. Lovastatin decreased elevated plasma levels of C-reactive protein, a marker for cellular inflammation, and acute coronary events in patients with relatively low plasma cholesterol levels. Recent studies also suggest that use of statins may decrease the risk of stroke, de-mentia, and Alzheimer’s disease and may improve bonedensity in postmenopausal women. These broad actions may be related to the hypocholesterolemic, antiprolifer-ative, antiinflammatory, or antioxidant properties of the statins or some combination of these properties.

The statins generally appear to be well tolerated, with muscle pain and liver dysfunction seen in 1 to 2% of patients. However, the consequences of 20 to 30 years of continuous use are unknown. This fact has been dramatically reinforced by the recent recognition of a potentially fatal consequence of statin use. A relatively common side effect of the statins (perhaps 1% of pa-tients) is myositis, that is, inflammation of skeletal mus-cle accompanied by pain, weakness, and high levels of serum creatine kinase. Rhabdomyolysis, i.e., disintegra-tion of muscle with urinary excretion of myoglobin and kidney damage, was considered to be a rare and extreme toxic outcome. However, cerivastatin (Baycol) has now been withdrawn from the market by its manufacturer (Bayer) because of 31 deaths linked to fatal rhabdomy-olysis. The risk of muscle damage is said to increase with simultaneous use of the triglyceride-lowering fibrates. Pravastatin may be less toxic than other statins because it does not readily penetrate extrahepatic cells and may be more confined to the liver after oral dosage.

Most of the statins (lovastatin, simvastatin, atorvas-tatin, and cerivastatin) are metabolized by the cytochro-mal P450 3A4 system of intestines and liver to more wa-ter-soluble metabolites that are excreted in both the bile and urine. Drugs that inhibit P450 3A4, such as itra-conazole, cyclosporine, and erythromycin, can vastly (10-fold) increase plasma statin levels and thus increase the risk of toxicity. Unexpectedly, grapefruit juice can inhibit intestinal metabolism of the statins and can result in an 8- to 10-fold increase in simvastatin serum levels. Since fluvastatin is metabolized by cytochrome P450 2C9, which is also responsible for metabolism of warfarin, warfarin toxicity may be increased if these drugs are si-multaneously given. Grapefruit juice should obviously not be consumed within several hours of statin adminis-tration. Drugs that induce the P450 3A4 system, such as barbiturates, can accelerate statin metabolism and sup-press statin blood levels.