Postmolar or persistent GTD is only one of the many forms of malignant GTD.

Postmolar or persistent GTD is only one of the many forms of malignant GTD. Although invasive moles are his-tologically identical to antecedent molar pregnancies while invading the myometrium, choriocarcinomas are a malig-nant transformation of trophoblastic tissue. Instead of hydropic chorionic villi, the tumor has a red granular appearance on cut suction and consists of intermingled syncytiotrophoblastic and cytotrophoblastic elements with many abnormal cellular forms. Clinically, choriocarcino-mas are characterized by rapid myometrial and uterine-vessel invasion and systemic metastases resulting from hematogenous embolization. Lung, vagina, central ner-vous system, kidney, and liver are common metastatic loca-tions. Choriocarcinoma may follow a molar pregnancy, normal-term pregnancy, abortion, or ectopic pregnancy. In the United States, choriocarcinoma is associated with approximately 1 in 150,000 pregnancies, 1 in 15,000 abor-tions, 1 in 5000 ectopic pregnancies, and 1 in 40 molar pregnancies.

Early identification and treatment are important. Abnormal bleeding for more than 6 weeks after any pregnancy should be evaluated with hCG testing to exclude a new pregnancy or GTD. Failure of quantitative hCG levels to regress aftertreatment of a molar pregnancy suggests that further treat-ment is needed. Identified metastatic sites should not be biopsied to avoid bleeding complications. Most GTN,including malignant forms, are highly sensitive to chemotherapy and often results in a cure, allowing for future reproduction.

Nonmetastatic persistent GTN is completely treated by single-agent chemotherapy. Single-agent chemotherapy iseither methotrexate or actinomycin D. The prognosis for metastatic GTN is more complex, divided into good and poor prognostic categories (Table 41-2). The World Health Organization (WHO) has developed a prognostic scoring system for GTN that includes a number of epi-demiologic and laboratory findings; this system was later combined into the International Federation of Gynecology and Obstetrics (FIGO) staging system (Table 41-3). A FIGOscore of 7 or above classifies metastatic GTN as high-risk, requir-ing multi-agent chemotherapy. The combination chemother-apeutic regimen with the highest success rates is: etoposide,methotrexate, actinomycin D, cyclophosphamide, andOncovin (vincristine)) [EMACO]. Adjunctive radiother-apy is sometimes performed with patients who have brain or liver metastasis. Surgery may be necessary to control hem-orrhage, remove chemotherapy-resistant disease, and treat other complications to stabilize high-risk patients during intensive chemotherapy. Cure rates for non-metastatic and good-prognosis metastatic disease approach 100%. Cute rates for poor-prognosis metastatic disease are 80% to 90%. 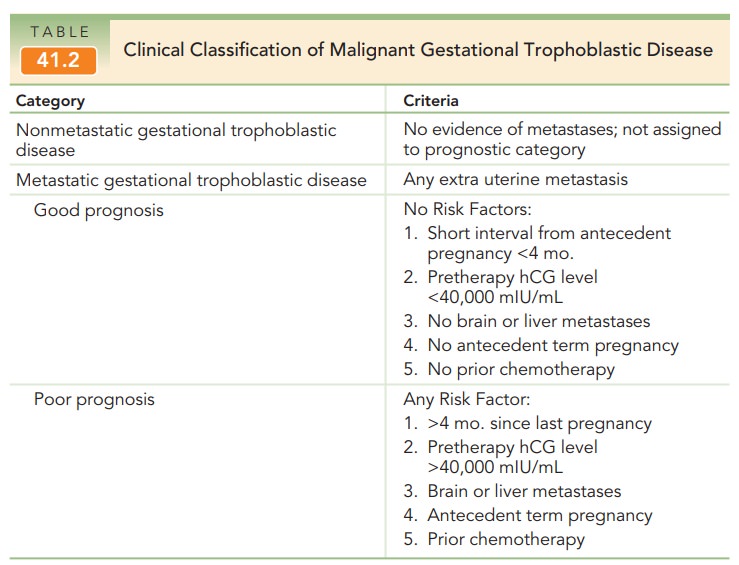