A hydatidiform mole includes abnormal proliferation of the syncytiotrophoblast and replacement of normal pla-cental trophoblastic tissue by hydropic placental villi.Complete moles do not have identifiable embryonic orfetal structures.

The genetic constitutions of the two types of molar pregnancy are different (Table 41.1). Complete moles have chromo-somes entirely of paternal origin as the result of the fer-tilization of a blighted ovum by a haploid sperm that reduplicates, or rarely, fertilization of a blighted ovum with two sperm. The karyotype of a complete mole is usually 46XX.The fetus of a partial mole is usually a triploid. This consists ofone haploid set of maternal chromosomes and two haploid sets of paternal chromosomes, the consequence of di-spermic fertilization of a normal ovum. Complete moles aremore common than partial moles and are more likely to undergo malignant transformation. 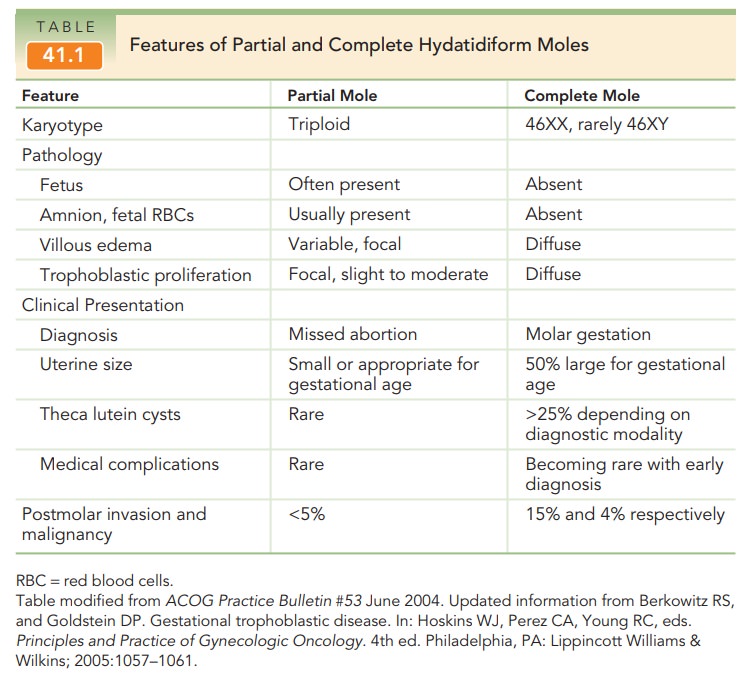 Patients with molar pregnancy have findings consistent with a confirmed pregnancy as well as uterine size and date discrepancy, exaggerated subjective symptoms of preg-nancy, and painless second-trimester bleeding. With theincreased early prevalence of first-trimester ultrasound, moles are now frequently diagnosed in the first trimester of pregnancy before symptoms are present. Abnormal bleeding is the mostcharacteristic presenting symptom which prompts evalu-ation for threatened abortion. Lack of fetal heart tones detected at the first obstetric appointment can also prompt evaluation (depending on the estimated gestational age). Ultrasound imaging confirms the diagnosis of molar preg-nancy by its characteristic “snowstorm” appearance and absence of fetal parts (complete mole) [Fig. 41.1]. In cases of partial mole, ultrasonography reveals an abnormally formed fetus. Quantitative hCG levels are excessively elevated for gestational age, and the uterus is usually larger than expected. 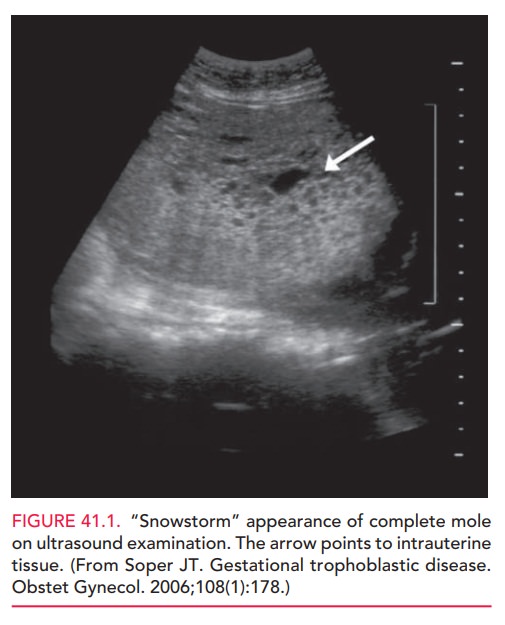 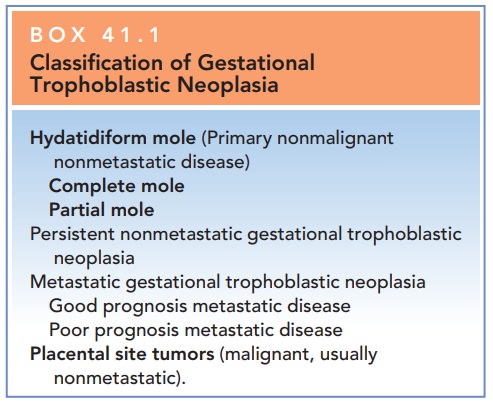 Molar pregnancies may present with other signs and symptoms, including severe nausea and vomiting, marked gestational hypertension, proteinuria, and, rarely, clinical hyperthyroidism. Most of these findings can be attributed tothe high levels of hCG produced by the abnormal pregnancy. Some patients experience tachycardia and shortness of breath, arising from intense hemodynamic changes asso-ciated with acute hypertensive crisis. In these patients physical examination reveals not only date and size dis-crepancy of the uterine fundus and absent fetal heart tones, but also changes associated with developing severe hypertension, such as hyperreflexia. Bimanual pelvic exam-ination may reveal large adnexal masses (theca luteincysts), which represent marked enlargement of the ovariessecondary to hCG stimulation.

With earlier diagnosis, the medical complications of molar pregnancy are becoming less common.

In any woman who presents with findings suggestive of severe hypertension prior to 20 weeks in pregnancy, a molar pregnancy should be immediately suspected.

Twin pregnancies with a normal fetus coexisting with a complete or partial mole are exceedingly rare. Women with these pregnancies should be treated in a tertiary hos-pital center with specialized care. Medical complications in molar twin gestations rarely allow these pregnancies to reach term. These pregnancies also have a higher risk of persistent metastatic or nonmetastatic gestational tro-phoblastic disease (GTD).

An invasive mole is histologically identical to a com-plete mole. It invades the myometrium without any inter-vening endometrial stroma seen on histological sample. It is often diagnosed months after evacuation of a complete mole, when hCG levels do not fall appropriately as persis-tent metastatic or nonmetastatic GTD. Occasionally, itmay be diagnosed on curettage at the time of initial molar evacuation.

In most cases of molar pregnancy the definitive treatment is prompt evacuation of the uterine contents. Uterine evacuationis done most often by dilation of the cervix, and suction curettage followed by gentle sharp curettage. Because the evacuation of larger moles is sometimes associated with uterine atony and excessive blood loss, appropriate prepa-rations should be made for uterotonic administration and blood transfusion, if needed. In rare cases of a late present-ing partial molar pregnancy, there may be an additional need for larger grasping instruments to remove the abnor-mal fetus.

In general, the larger the uterus, the greater the risk of pul-monary complications associated with trophoblastic emboli, fluid overload, and anemia.

This is particularly true in patients with severe associ-ated gestational hypertension, who may experience con-comitant hemoconcentration and alteration in vascular hemodynamics. Hysterectomy or induc-tion of labor with prostaglandins is not usually recom-mended, because of the increased risk of blood loss and other sequelae. The bilaterally enlarged multicystic ovaries (theca lutein cysts) resulting from follicular stimulation by high levels of circulating hCG, do not represent malignant changes. The theca lutein cysts invariably regress within afew months of evacuation, and therefore do not require surgi-cal removal.

Patients who have no interest in further childbearing or have other indications for hysterectomy may be treated by hysterectomy with ovarian preservation. Despite removal of the entire primary neoplasm, the risk of persistent GTD is 3% to 5%.

Because of the predisposition for recurrence, patients should be monitored closely for 6 to 12 months after the evacuation of a molar pregnancy. Rh-negative patients should be given Rh-immune globulin. Follow-up consists of periodic physical examination to check for vaginal metastasis and appropri-ate involution of pelvic structures. Quantitative hCG levels should be checked within 48 hours following evacuation, every 1 to 2 weeks while elevated, and at 1 to 2 months thereafter. Quantitative hCG levels that rise or reach a plateau are an indication of persistent disease and the need for further treatment after a new pregnancy has been ruled out. During the first year, the patient should be treated withoral contraceptive pills (OCPs) or other reliable contraceptive method to prevent an intercurrent pregnancy. (Multiple stud-ies have proven the safety of OCP use after a molar preg-nancy.) The risk of recurrence after 1 year of remission is<1%. The risk of recurrence with subsequent pregnancies is 1% to 2%. There is no increase in congenital anomalies or complications in future pregnancies.

Blood type with type and screen