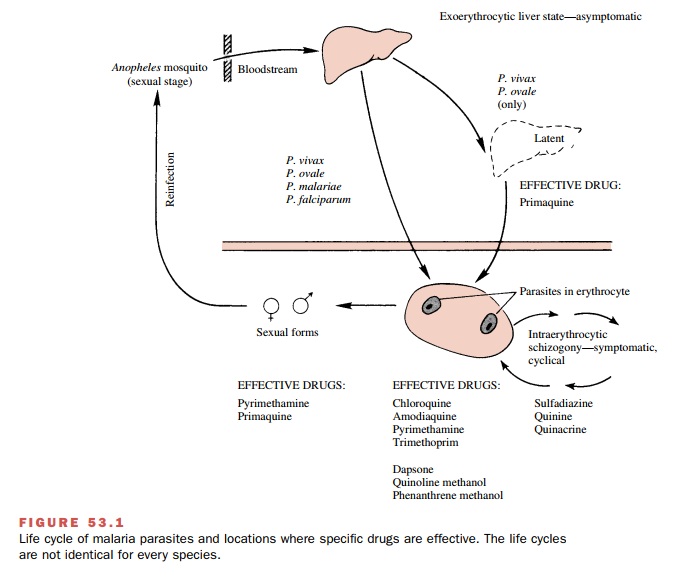 Malaria is a parasitic disease endemic in parts of the world where moisture and warmth permit the disease vector, mosquitoes of the genus Anopheles, to exist and multiply.

Malaria is a parasitic disease endemic in parts of the world where moisture and warmth permit the disease vector, mosquitoes of the genus Anopheles, to exist and multiply. The emergence of both drug-resistant strains of malarial parasites and insecticide-resistant strains of Anopheles has contributed significantly to the extensive reappearance of this infection. The annual global inci-dence of malaria is estimated to be approximately 200 million cases, and in tropical Africa alone, malaria is re-sponsible for the yearly deaths of more than 1 million children younger than 14 years. Malaria ranks as a lead-ing cause of mortality in the world today.

Most cases of malaria in the United States result from individuals who have contracted the disease be-fore they entered this country. It is also possible to con-tract malaria during a blood transfusion if the trans-fused blood has been taken from a malaria-infected individual. Additionally, hypodermic needles previously contaminated by blood containing malarial parasites can be the source of an infection; this has occurred when needles are shared among drug addicts.

Effective treatment of malaria depends on early di-agnosis. Since the patient’s symptoms are often rela-tively nonspecific, it is crucial to examine stained blood smears for the presence of the parasite. Even this pro-cedure may be inconclusive during the early stages of the infection, since the levels of parasitemia can be quite low. Thus, it is important to repeat the blood smear examination several times if malaria is suspected.

Once the presence of malarial parasites has been confirmed, it is vital to identify the particular plas-modial strain involved, since appropriate use of chemotherapy depends on the particular species re-sponsible for the acute attack. Unfortunately, mixed in-fections, that is, simultaneous infections with more than one species of plasmodia, are often observed. If more than a single species is involved, treatment appropriate for the elimination of all strains must be instituted to avoid delayed attacks or misinterpretations.

Life Cycle of the Malarial Parasite

The malarial parasite is a single-cell protozoan (plas-modium). Although more than 100 species of plasmodia have been identified, only four are capable of infecting humans (Plasmodium malariae, P. ovale, P. vivax, and P. falciparum); the rest attack a variety of animal hosts. P. falciparum and P. vivax malaria are the two most common forms.

P. vivax malaria is the most prevalent type of infec-tion and is characterized by periodic acute attacks of chills and fever, profuse sweating, enlarged spleen and liver, anemia, abdominal pain, headaches, and lethargy. Hyperactivity of the reticuloendothelial system and he-molysis are the principal causes of the enlarged spleen and liver; these effects often result in anemia, leuko-penia, thrombocytopenia, and hyperbilirubinemia. The cyclical nature of the acute attacks (48 hours for

P. vivax, P. ovale, and P. falciparum) is characteristic of malaria and reflects the relatively synchronous passage of the parasites from one red blood cell stage in their life cycle to another. If P. vivax malaria is not treated, the symptoms may subside for several weeks or months and then recur. These relapses are due to a latent liver form of the parasite (see the following section), which is not present in P. falciparum strains. Although the fatal-ity rate of P. vivax malaria is low, it is an exhausting in-fection and renders the patient more susceptible to other diseases.

Unchecked P. falciparum malaria is the most serious and most lethal form of the disease. It is responsible for 90% of the deaths from malaria. The parasitemia achieved can be quite high and will be associated with an increased incidence of serious complications (e.g., hemolytic anemia, encephalopathy). P. falciparum malaria produces all of the symptoms listed for P. vivax malaria and in addition can cause renal failure and pul-monary and cerebral edema. The tissue anoxia occur-ring in P. falciparum infections results from the unique sequestering of infected erythrocytes deep in the capillaries during the last three-fourths of the intraerythro-cytic cycle.

Members of the genus Plasmodium have a complex life cycle (Fig. 53.1). A sexual stage occurs within the Anopheles mosquito, while asexual stages take place in the host. Malaria is actually transmitted from one hu-man to another through the insect vector. Initially, a fe-male mosquito is infected by biting a human with the disease whose blood contains male and female gamete forms of the parasite. Fertilization takes place in the mosquito gut, and after differentiation and multiplica-tion, the mature sporozoite forms migrate to the insect’s salivary glands. At the mosquito’s next feeding, the sporozoites are injected into the bloodstream of an-other human to begin the asexual stages. After a rela-tively brief residence (less than an hour) in the systemic circulation, the sporozoites invade liver parenchymal cells, where they divide and develop asexually into multinucleated schizonts. These are the primary exo-erythrocytic tissue forms of the parasite. When this pri-mary stage of development is completed (6–12 days), the schizonts will rupture, releasing merozoites into the blood. 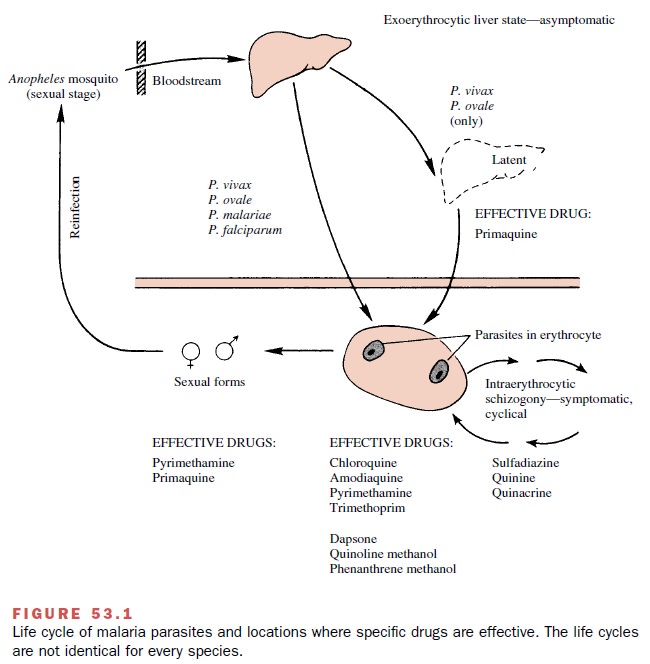 These latter forms invade host erythrocytes, where they again grow and divide asexually (erythro-cytic schizogony) and become red cell schizonts. Some of the parasites differentiate into sexual (male and fe-male) forms, or gametocytes. If the diseased human is bitten by a mosquito at this time, the gametes will be taken up into the organism’s gut to repeat the sexual cy-cle. The gametocytes and the exoerythrocytic liver forms of Plasmodium spp. are not associated with the appearance of clinical symptoms of malaria.

The asexual intraerythrocytic parasites, that is, those that do not differentiate into gametocytes, also multiply and grow until they rupture the cells in which they re-side; these new merozoites are released into the blood-stream. This occurrence not only sets up the subsequent cyclical red blood cell stages of the cycle but also gives rise to the symptoms associated with malarial infec-tions. The recurrent chills and fever are thought to be related to the lysis of erythrocytes and the accompany-ing release of lytic material and parasite toxins into the bloodstream. Although the appearance of a cyclic fever is useful for diagnosis, this symptom may not occur dur-ing the early stages of the infection.

In individuals infected with either P. vivax or P. ovale, the exoerythrocytic tissue (e.g., liver) forms can persist after a latent period and give rise to relapses. In P. falciparum and P. malariae malaria, however, there do not appear to be any persistent secondary liver forms. Thus, in both of these forms of malaria, the physician must contend only with the asexual erythrocytic forms and the gametes, not with the latent liver forms found in P. vivax and P. ovale.

Patients who have blood transfusion malaria are in-fected with the asexual erythrocytic parasites only; exo-erythrocytic tissue forms apparently do not develop. Plasmodium malariae has been known to produce an infection after transfusion, even when the blood was ob-tained from a person whose only contact with malaria was 40 years previous to the donation of blood.

The main objective in the clinical management of pa-tients suffering from an acute malaria attack is the prompt elimination of the parasite form responsible for the symptoms, that is, the asexual erythrocytic form. Drugs that are particularly effective in this regard are called schizonticidal, or suppressive, agents. They in-clude such compounds as amodiaquine, chloroguanide, chloroquine, hydroxychloroquine, pyrimethamine, qui-nine, and tetracycline. These drugs have the potential (excluding any drug resistance) for effecting a clinical cure; that is, they can reduce the parasitemia to zero. The term radical cure also has been used, and it, in con-trast to clinical cure, implies the elimination of all para-site forms from the body.

Once the primary therapeutic objective has been achieved, attention can be focused on such additional considerations as elimination of the gametocytes and the tissue forms of the parasite. Success in these areas would help to ensure that relapses do not occur. Since no latent liver forms are associated with mosquito-in-duced, drug-sensitive P. falciparum malaria, administra-tion of chloroquine for up to 3 months after the patient leaves a malarious area will usually bring about a com-plete or radical cure unless the organism is resistant to chloroquine.

The emergence of parasites resistant to chloroquine is an increasingly important problem. Several strains of chloroquine-resistant P. falciparum have been identi-fied. This resistance would lead to the reappearance of overt symptoms of P. falciparum malaria.

P. falciparum malaria may be accompanied by an in-fection caused by one of the other three plasmodial forms (mixed infection). As long as all of the parasites are drug sensitive, the parasitemia can be eliminated. However, it must be remembered that even though P. falciparum malaria may be ameliorated or eliminated, relapses due to P. vivax and P. ovale still can occur.