According to the environment the ecosystem is divided into two parts, one Terrestrial Eco-system and the other one is Aquatic Eco-systems.

According to the environment the ecosystem is divided into two parts, one Terrestrial Eco-system and the other one is Aquatic Eco-systems.

The Environment of a place depends on the topography, weather and climate of that place. The animals or plants of a particular region are dependant on some natural characteristics such as nature of soil, rivers, deserts, hills, mountains, climate etc.

1. Terrestrial Ecosystem: There are different types of terrestrial eco-system in different parts of the earth surface due to difference of rainfall, temperature, wind flow etc. There are many differences in ecology of agricultural land,grassland,  desert  and  forest.  Instead  there  are  differences  in  ecology  of mountain, hill, plain land, cold area, temperate area and tropical area. It is not possible to describe all types of eco-system in this chapter, so two of our known eco-systems are described here briefly.

A. Eco-system of paddy field: Due to cultivation, manure and irrigation thefertility of the land is increased. Paddy is the main plant of paddy field. Besides this there grow grass and many other weeds. They are the producers of the eco-system. Different types of insects infect the paddy. They are the primary consumers. Toad and different birds lives on the insect, snake lives on toad, the predator birds lives on small birds. When they die the saprophytic insect (ant, larvae of flies) and bird (crow, vulture) eat them. Besides these different types of bacteria and virus decomposes the dead bodies of plants and animals into organic compounds. In this way the eco-system of paddy field is formed.

B. Ecosystem of forest: The forest eco-system of Bangladesh is more or lesssame in nature. But the organisms of different food chains are different in different places. 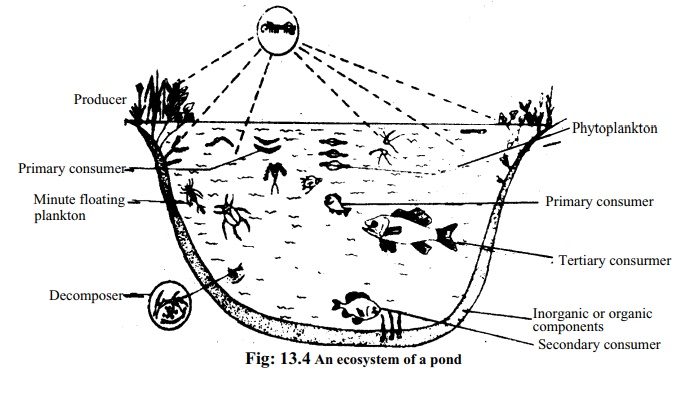 A. Pond ecosystem: The mutual relation between the living organisms andnon- living things of a particular area is known as ecosystem. In every ecosystem, every organism has a definite habitat and a definite life pattern. It is the main characteristics of an ecosystem.

A pond is a self-sufficient and an ideal example of ecosystem. In a pond, the intimate relation between the inhabiting living and non-living components is well understood. The non-living objects are various types of organic and inorganic substances such as water, sun rays, CO2, oxygen, calcium, phosphorus, humic acid etc. The living components are producers, primary consumers, secondary consumers, tertiary consumers and various types of decomposers.

Producers: Various types of photosynthetic algae and shallow water plantsliving in the pond are the producers. The floating organisms are called plankton. The minute plants of plankton type are known as phytoplankton. Green aquatic algae and other aquatic plants can live by producing food by the process of the photosynthesis, so they are called producers.

Primary consumers: These are various types of floating minute insects, larvaeof mosquito and other microscopic animals like zooplankton etc. Floating minute animals are called zooplankton. These consumers cannot manufacture their own food and they live on by eating the producers directly.

Decomposer: In pond water, various types of fungi and bacteria live as,saprophytes which are- known as decomposer. These decomposers can live by floating on water or live at the bottom clay. They attack living or dead consumers and help to rot. As a result, organic and inorganic chemical substances usable by the producers are fornmed again. The producer community of the pond use these decomposed elements. The flow chart gives an idea about the components of pond ecosystem. 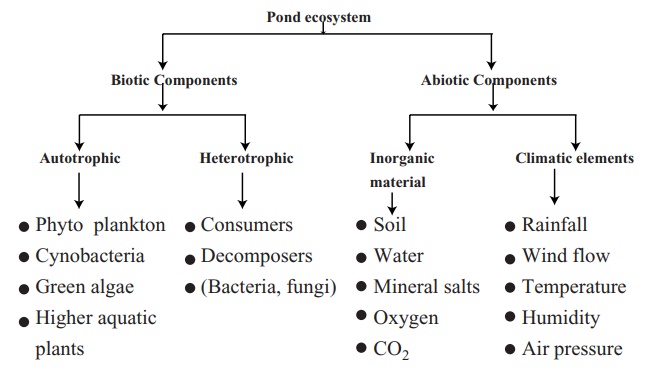 B. River Ecosystem: water body often the rivers may have strong currents. Forthis reason, there is a noticeable difference between the environment and the living communities of rivers with those of the ponds. In river there are different types of algae fishes like Hilsha, Pungas, Chital, Boal etc. live in the rivers. The bodies of. these fishes are laterally compressed. For this feature of their body shape they are capable of moving easily in strong current. Near the bank of the river where the current is less, living communities like those of the ponds grow there. In the ecosystem of rivers the food chain is short e.g. Algae, Hilsa, Boal.

(iii) Marine Ecosystem: The water of the sea is saline. In the saline water thesea there lives numerous phytoplanktons and zooplanktons. Coral, Prawn Starfish, Snail, various types of small and large fishes, tortoise, dolphin, shark. whale etc. live in the sea. Phytoplankton and sea algae are the only producer in marine environment. Prawn, bivalve, zooplankton, minute pelagic animals and small fishes are the primary consumers. Large fishes, tortoises, whales etc. are the secondary ones. The sharks and various predatory fishes the tertiary ones. Generally the small fishes are herbivorous. The starfish, prawns, snails are detritus eating animals. The food chain of whale is also short like that of hilsa such as plankton, whale, plankton, small bivalve's and whale.

Ecosystem is a self-sufficient unit: Every ecosystem is more or less a self-controlled unit. In nature the number of a particular living being cannot increase too much. All organisms are interrelated with each other in the form of food and consumers chain. Any one of these systems cannot be completely eliminated easily. The proportionate number of different level of biotic communities always remains more or less unchanged.