We understand from the discussion above that ecosystem has two components. One is biotic community and the other is non living environment.

1. Inorganic components: Water and mineral salts are inorganic componentsof eco-system. In addition to these there are other gaseous elements like O2 (oxygen), N2 (nitrogen), CO2 (carbon dioxide) etc., which are necessary for the nutrition of the plants and respiration of organisms.

3. Physical components: The environment is largely dependent on certainphysical factors. They are:

i. Climate: The climate of a particular environment depends on rainfall, airmovement, temperature, humidity, amount of sunlight, snow fall etc.

ii. Soil factor: Condition of soil in any place influences the animals and plantsliving there.

b) Humus and Mineral salt: The rotten manure, produced from the deadplants and animals is the humus. In humus there is a large amount of mineral salt. Plants absorb this mineral salt with the help of their root hair.

c) Soil water condition: The life of animals and plants also depend on thequantity of the water, the level of underground water, drainage of excess water and also on the porosity of soil.

Every organism is a part of the eco-system. In eco-stem the non-living and living components are interdependent. Absence of one affects the other in maintaining their natural activities. The habits of plants influence the animals characters of eco-system. Every living being takes food for its physical growth, reproduction and existence. Every organisms gets energy from food. We have learnt before that the source of energy flowing in biotic community is the sun.

Food chain: We know that it is the green plants which manufacture their ownfood by using the solar energy. As the green plants can prepare their own food, they are autotrophic. Green plants in the presence of sun light react with the inorganic substances (CO2 and water) and make their own food. The plant's body preserves the solar energy in the form of potential energy. Of the food manufactured by the plants, only small portion is used for its own requirement while the major portion is stored in its body. The herbivorous animals eat this stored food and the carnivorous animals eat these herbivorous animals. They are consumers. The decomposers (bacteria, fungus) use plants, herbivorous, carnivorous animals etc. as food and transforms those into humus. From inorganic components of soil the green plants again produce their food with the help of solar energy. It is now clearly understood that starting with plants, through various types of animals and decomposers, step by step, the food substances are transferred from one to another and finally return to the green plants. This cyclic transfer of food and the relation of food and its consumer are known as the food chain.

Depending on producer and different levels of consumers some examples of food chain are given below: 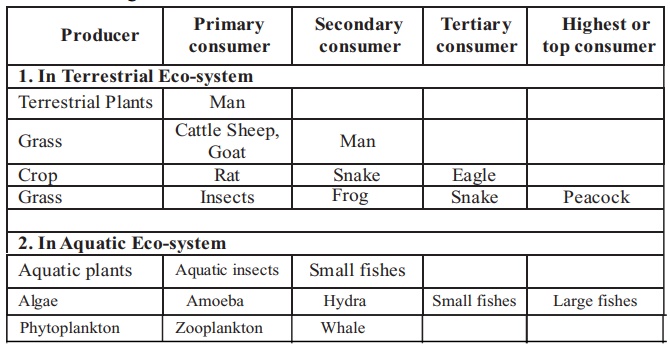 From the examples given above, we can understand that how the food material forms consumers of different levels of the food chain based on producers. In one food chain there may be one producer and three to four consumers.Generally the final consumer is not eaten by any other animal. His death occurs due to disease, normal or abnormal causes.