Food web: Previously we came to know that any food chain cannot remainscattered in nature. One food chain is linked with the other.

Producer: Solar energy is the main source of energy in the ecosystem. thegreen plants, in presence of sunlight react with carbon dioxide and water and produce carbohydrate and oxygen as excess. In this way, the solar energy stored in chemical compounds or food. Those who accomplish this significant function are known as producers. Green plants are the main producers in eco-system. Producers are autotrophic. The producers do not depend upon other organisms for nutrition. 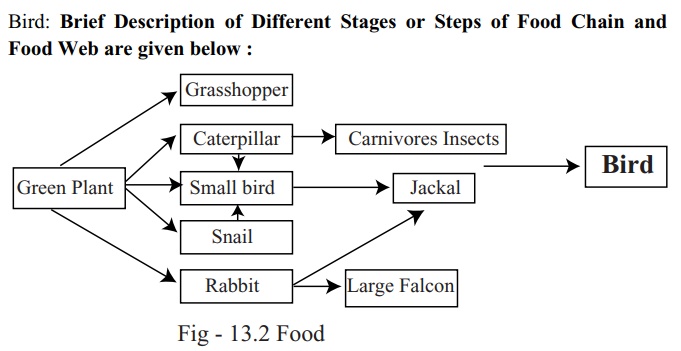 Consumers: The living organisms which cannot manufacture their own foodusing the solar energy like the green plants and get their nutrition by eating other organisms are known as consumers. Most of the consumers of the living world are animals, e.g. mynas eat the insects, lion eats the deer, tiger eats men etc. So Myna, lion and tiger are consumers. As the consumer depends upon other living organisms for food or nutrition they are called heterotrophic. There are three levels of consumer's namely Primary consumer, Secondary consumer_ and Tertiary consumer.

There are many animals which live on food of more than one level e.g. when the peacocks live on plants, they are primary consumers and when they eat small insects, they are tertiary consumers. These sorts of animals are known as omnivorous animals. Man also consumes foods of different levels of the food chain to stay alive.

Decomposer: In an eco-system there is another type of heterotrophic organismwhich is collectively known as decomposers. This includes mainly the bacteria and fungi. From the body of the decomposers enzymes are secreted and that decomposes the dead body of the plants and animals to form simple chemical compounds. These chemical compounds are absorbed by the bacteria and fungi as nutrients. Besides this, the decomposers perform an important function which is to transform organic substances into inorganic ones. These inorganic substances are used by green plants for food preparation.