This test assumes greater importance in clinical immunology both at a research level and in the clinical laboratories.

This test assumes greater importance in clinical immunology both at a research level and in the clinical laboratories. These tests can be carried out in whole blood 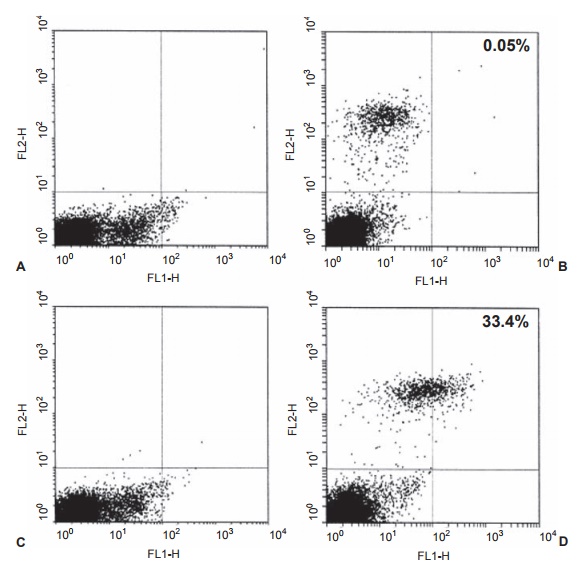 Figure 2.4 FACS analysis of D8/17-positive lymphocytes. Whole venous blood was obtained from a normal patient (panels A and B) and an obsessive-compulsive disorder (OCD) patient (panels C and D). Panels A and C are controls in which the D8/17 and CD19 antibodies were omitted. Panels B and D are dual-labeled cells from a normal individual and a patient with OCD. The D8/17 fl uorescence as a percentage of total B cells was 0.5 percent in the normal and 33.4 percent in the OCD patients in panels B and D. Each point on this plot represents fluorescence recorded from an individual lymphocyte as it passes through the counter. Reprinted with permission from Elsevier; Chapman F, Visvanathan K, Carreno-Manjarrez R, Zabriskie JB. A fl ow cytometric assay for D8/17 B cell marker in patients with Tourette’s syndrome and obsessive compulsive disorder. J Immunol Methods. 1998;219:181–186.

that has been anticoagulated so as to per-mit the use of viable cells. The preferred method is the isolation of the lymphocytes from blood using a density gradient assay method. The anticoagulated blood sample is usually diluted 1:1 with PBS (pH 7.4) and slowly layered over the density gradi-ent solution, which has been prepared so that the cell populations will separate into different layers. As seen in Figure 2.5, neutrophils and red blood cells are centrifuged to the bottom, while the mononuclear cell population stays in the middle of the gradient. Finally, the serum components and platelets are mainly in areas above and below the mononuclear cells. Once the mononuclear cells are removed from the gradient and washed several times, a relatively pure population of mononuclear cells is obtained. 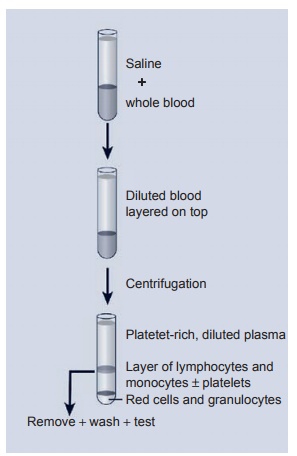 Figure 2.5 Lymphocyte and monocyte separation using a fi coll gradient. As noted, red cells and granulocytes spin to the bottom of the tube while a clear layer of lymphocytes and monocytes is separated by the gradient. These cells are counted and adjusted to a given number of cells for use in the proliferation assay.

When these cells are stimulated by a specific antigen, a few of these resting cells undergo proliferation (activated cells) and the transformation of activated cells can be measured by incorporation of radiolabeled thymidine into the DNA of the cells and the number of counts per minute measured in β-counter. More recently, these same acti-vated cells can be measured by the num-ber of cells expressing cell surface antigens using markers such as CD69.