With the renewed interest in the role of lymphocytes in disease states over the past thirty years, a systematic study of the mark-ers present on B and T lymphocytes has been undertaken.

With the renewed interest in the role of lymphocytes in disease states over the past thirty years, a systematic study of the mark-ers present on B and T lymphocytes has been undertaken. The knowledge that many such markers exist on a given cell was made possible by the introduction of monoclonal antibodies specific for each marker. Thus, antibodies could quickly identify lympho-cytes as B (CD19) or T lymphocytes (CD3) and later into helper (CD4) or suppressor cells (CD8) and many other markers. 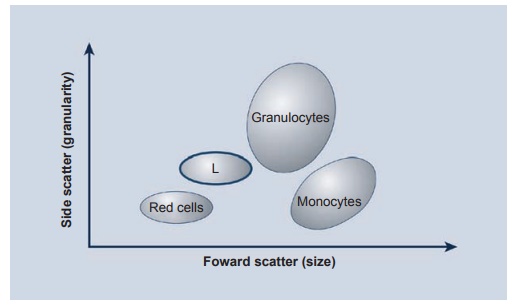 Figure 2.3 Schematic depiction of cell separation on a flow cytometry machine or fl uorescein-activated cell scan. The different cell populations are separated both by size (forward scatter) and granularity (side scatter) and a given population is then separated into B or T cells and within the T cells into helper (CD4+) and suppressor (CD8+) cells. Isolation and purifi cation of a given subset of cells can be achieved by a fl uorescein-activated cell sorter.

The second major advance was the introduction of the flow cytometer, whichmeasures the fluorescence of each labeled antibody. The different cell populations are aspirated into the machine, which forces the cells to flow through the chamber singly past a laser beam and light sensors. Light emitted by the excited fluorescent dye on the cell surface is detected by the sensors and analyzed by computer software. Using this system, one can divide cells into dif-ferent populations, depending on their size and granularity (see Figure 2.3). Once the different cell populations are identified, a specific population can be “gated” for fur-ther study, such as identification of helper cells (CD4) and suppressor cells (CD8-PE), as well as many other lymphocyte subsets.

A variation of this technique is illus-trated in Figure 2.4 in which the lympho-cytes are identified with anti-CD3 labels. Of this population, the number of B cells in the population is identified by CD19-PE labeled antibodies. Finally, the num-ber of B cells expressing a novel antigen is identified, in which the percentage of CD19+ exhibiting D8/17+ B cells is calculated. All of these values are obtained rapidly due to the speed with which cells are counted with different labels, and the results are accurate because of the large number of cells that are counted (in the thousands). It should be emphasized that values for lymphocyte subsets will change with increasing age from children to adults, especially during the first year of life.

Using a more sophisticated machine called a fluorescein-activated cell sorter (FACS), individual subsets of lymphocytes can be separated with fluorescein-labeled antibodies into unique cell populations or even single cells. This procedure is done under sterile conditions and is useful in isolating a single cell or cell population for further cell culture, growth, and study.