Cream is the fat of milk and is used in the preparation of sweets.

Khoa is prepared by evaporating whole milk in an open cast iron pan with continuous stirring until it is semi-solid. It is used extensively in the preparation of Indian sweets.

Cream is the fat of milk and is used in the preparation of sweets. It is made by simmering large quantities of milk until a thick layer of milk fat and coagulated protein form on the surface. It can be consumed with or without the addition of sugar.

Butter is obtained from cream by churning. When cream is churned, the fat globules are destabilised and coalesce until the milk separates into two phases– viz., the butter and the aqueous phase. Butter is removed and washed.

Butter is used as a cooking medium in many Indian recipes. It is one of the main ingredients in cakes, biscuits, icing and bread. 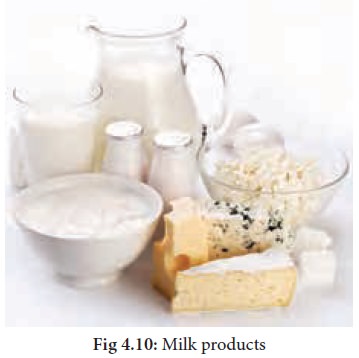 Ghee is butter oil. It is prepared by melting butter and separating the moisture from butter by heating. It is used in preparing Indian sweets, savouries, curries and variety rice like pulav and biriyani.

Paneer is a soft cheese prepared by addition of lemon juice or citric acid to hot milk and precipitating the casein. The liquid released in this process is known as whey and the resultant curd is tied in a muslin cloth and hung for a day to squeeze any liquid present in it. The soft cheese (paneer) that is obtained is used in Indian gravies and pulavs. It is a very good source of protein

It involves the curdling of milk with enzyme rennet under microbially controlled conditions. Milk is held at about 27°C in vats and a lactic acid culture is added. When the milk gets acidic, rennet is added to it and the milk is allowed to coagulate. The curd formed is cut and heated to about 37°C with constant stirring to remove the whey. Whey is drained. Salt is mixed with the curd and it is pressed to remove further amount of whey. The cheese formed is coated with paraffin to prevent loss of moisture. The paraffined cheese is allowed to ripen for three to six months at temperatures between 45°to 60°C.Cheese is a concentrated source of protein.

Curd is prepared by heating milk to about 50°C. A teaspoon of curd (starter) from an earlier batch of curd is added and is mixed thoroughly. The lactic acid bacteria present in the starter curdles the milk. The bacteria breaks down lactose to lactic acid thereby increasing the acidity of milk. When the pH reaches 4.6, the milk protein casein coagulates as curd. The optimum temperature for the formation of curd is 35 - 40°C and the time needed for curd formation is 8–12 hours depending on the atmospheric temperature. Curd is used as a dressing on salads made from fresh vegetables and combines well with plain cooked rice.

This is a coagulated milk product with curd like consistency. It is made from partially skimmed or whole milk and it has a slightly acidic flavour. In the production of yoghurt, a mixed culture of Lactobacillus bulgaricus, Streptococcus thermophilus and Lactobacillus acidophilus is added to pasteurised milk and incubated at 42°C to 46°C. 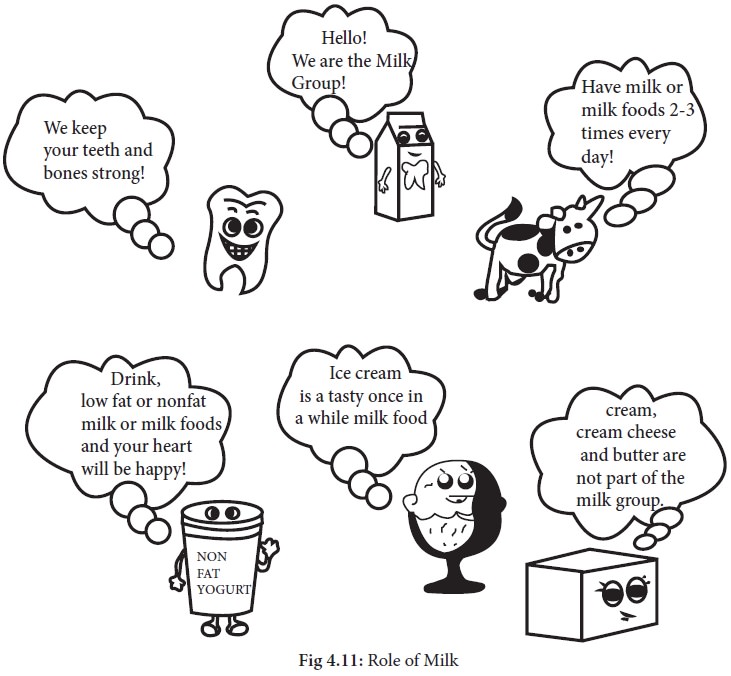