An egg is designed to give protection and food for a developing chick. I

Structure and composition of eggs

An egg is designed to give protection and food for a developing chick. It is therefore a very nutritious food. There are three main parts: the shell, the white and the yolk.

The shell consists of two parts 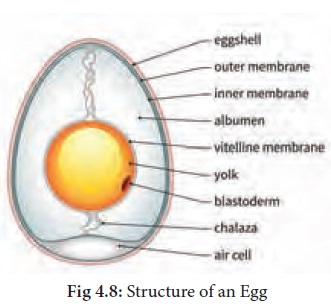 The outer shell protects the egg, or the developing chick in a fertilized egg. The shell is porous and contains numerous tiny holes, which enable a chick to breathe. The colour of the shell varies from white to deep brown depending on the breed of the hen

The two inner membranes lining the shell act as chemical filters to obstruct bacteria which may enter through the porous shell. The two membranes separate to form a small air pocket between them at the rounded end.

The egg white has two distinctly visible layers. The egg white immediately surrounding the yolk is thick and viscous. This is surrounded by a thinner more transparent white.

The egg yolk is anchored to the membranes inside the egg shell by two rope- like structures known as the chalazae. These hold the yolk centrally in position. The yolk is separated from the white by a membrane known as the vitelline membrane.

The white of the egg (albumin) consists of largely water with no fat or carbohydrate but contains 8-12 percent protein. Different types of proteins are present in egg white

like ovalbumin, conalbumin, ovamucoid, ovomucin and avidin. The protein ovomucin is responsible for the jelly-like character of egg white and thickness of the albumin. Avidin binds with biotin and makes the vitamin unavailable. But avidin is denatured by heat and thus cooked egg does not affect the availability of biotin.

Egg yolk comprises mostly 25-33 percent of fat and 15-17 percent protein and the remaining water. The major proteins in egg yolk are lipoproteins which include lipovitellins and lipovitellinin. These lipoproteins are responsible for the excellent emulsifying properties of egg yolk, when it is used in products such as mayonnaise.

The value of eggs in the diet

Eggs are an excellent and relatively cheap source of high biological value protein. Egg proteins have an excellent supplementary value to all other plant protein foods. Hence a combination of eggs with any of the cereal or cereal pulse mixture will enhance the protein quality of food.

They also provide vitamins A, D, E and riboflavin. Egg yolk is a good source of carotene and iron. Egg is one of the richest sources of lecithin- a phospholipid which forms a part of the structure of every cell wall in the body. Egg also provides essential fatty acids like linoleic acid and arachidonic acid.

Egg is an excellent food and hence its quality is of very great importance. Fresh eggs have the best quality. Quality of eggs can be determined by candling where the egg is held against a source of strong light.

The properties of eggs

There are three main properties of the proteins in eggs which enable them to be used in so many different ways in cookery.

b.      Egg proteins stretch when beaten and hold air in the structure.

Use of egg in cookery

Eggs can be used in many ways in cookery. Eggs when used alone or in combination with other foods they become the major protein source of  a meal. Eggs can be used as boiled, scrambled, fried (omelettes) or poached for table use. Eggs are used as :

Binding Agent: Egg proteins coagulate between 65 and 70°C and help to hold shape of the products in which it is used. They can be used for making cutlets, French toast or Bombay toast and banana fritters .

Leavening Agent: Eggs when beaten, form elastic films which can trap air. This air expands during baking and gives a fluffy spongy product. Thus they can be used in cakes, foamy omelette, souffiés and meringue.

An Emulsifying Agent: Besides protein, egg contains phospholids such as lecithin which are known for  their emulsifying quality. Hence egg can be used an excellent emulsifying agent in products such as mayonnaise as it is able to stabilise the oil in water dispersion .

As a Flavouring and Colouring Agent: Egg is used in food mixtures to contribute flavour and colour to products such as cakes and puddings.

As a Clarifying Agent: Egg helps in the preparation of clear soups. When a small amount of egg white is added to the liquid soup and heated, the egg albumin coagulates and carries along with it suspended particles. On allowing it to settle, a clear soup is obtained.

As a Garnishing Agent: Hard boiled eggs are diced and are used to garnish dishes like biryani.

As an Enriching Agent: Eggs are used to enhance the nutritive value of various preparations.