Over 200 edible fish varieties are known to be commercially important.

India has a coast line of 5,100 km. Over 200 edible fish varieties are known to be commercially important. Marine types of fish are sardines, mackerel, tuna, catfish, brown duck, ribbon fish, prawns and cuttle. Fresh water fish are carps, catla, rohu, murrels and hilsa. Fish contains complete proteins and can be an alternative for meat in the diet, but unfortunately fish consumption per capita is far lower than that of meat.

Edible fish are categorized as either fin fish of shell fish. The term fin fish refers to the fishes that have bony skeleton. Shell fish is used to designate both mollusks and crustaceans. Shellfish are highly perishable.

Crustacea have legs with partly joined outer shells. They include crabs, lobsters, prawns and shrimps. Molluscs have harder outer shells and no legs. They have hinged shells like oysters, scallops and mussels. 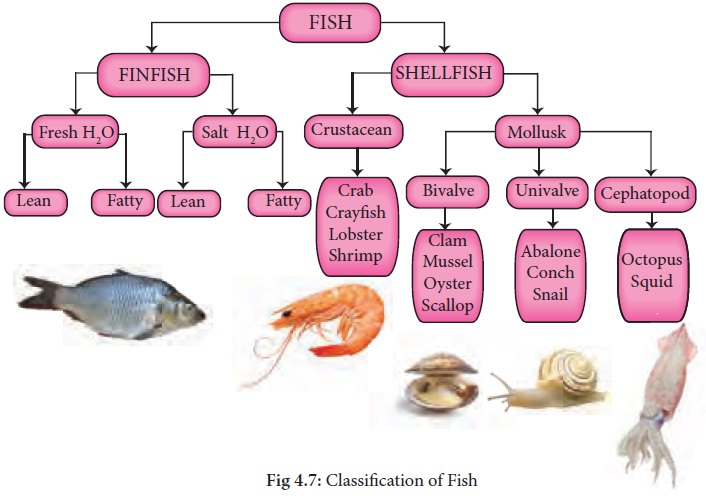 Carbohydrate: The shell fish has less fat and more carbohydrate than fin fish. Like meat, fish contain some glycogen in muscle tissues. In the live fish, glycogen is the source of stored energy. Oysters are notable for their high content of glycogen.

Protein : Fish is an excellent source of protein due to its quality and quantity. They contain around 20percent protein. The biological value of fish protein is 80. Fish is rich in lysine and methionine hence it has supplementary value with cereals and pulses.

Minerals: Fish is rich in calcium particularly small fish when eaten with bones. Marine fish are good sources of iodine, selenium and fluoride. Selenium is a powerful antioxidant. Oysters are good source of copper and iron. Sodium content of freshwater fish is slightly less than meat. Shell fish such as oysters are nature’s richest source of zinc. The bioavailability of iron and zinc is higher in fish than plant foods.

Eskimos living in Greenland and the fishing community in Japan, enjoy complete freedom from cardiovascular diseases. Their daily consumption of fish is 250-400 g. The beneficial effect of dietary fish is attributed to the fatty acid composition of the fish.

Clams, oysters and mussels : Tightly closed and heavy for their size, shells should not be cracked. 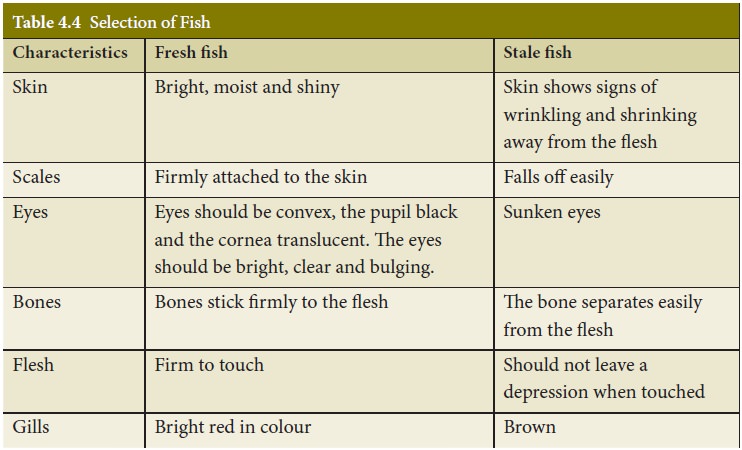