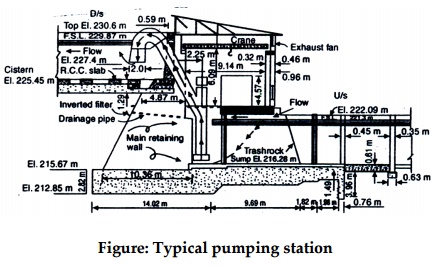 In lift irrigation water is lifted from a river or a canal to the bank to irrigate the land which are not commanded by gravity flow.

In lift irrigation water is lifted from a river or a canal to the bank to irrigate the land which are not commanded by gravity flow. Lift irrigation is being increasingly practiced in India. Every State such areas exist where irrigation can be extended only by lift canals. Lift irrigation also includes tube well irrigation but the latter is not feasible in areas where scarcity of water exists, climate is dry and groundwater is low, i.e., groundwater is in insufficient quantity and unsuitable quality. Lift canal then constitutes the only means of extension of irrigation to sound perched lands. A lift canal can cater for much larger areas than a tube well and is suitable when supplies either from a river or a canal are available for lifting to higher elevation.

Surface water may be lifted from a reservoir, a river, or from a gravity flow canal. From river, water may be lifted by installing pumps either on the ground or on floating barges. Floating barge installation envisages economical and expeditious execution of the project for lift irrigation. Moreover, the pumping installation can be made mobile by rowing to the ne xt pumping sit after completing irrigation at one installation. In a canal, water may be lifted at the point f the off take of the lift distributary or in between the length of a canal wherefrom high tract to be irrigated starts. Figure shown the longitudinal section of a lift canal

Optimal alignment of the lift canal is of paramount important because it involves dealing with costly process of water lifted and then diverted to flow by gravity. The essence of the arrangement is to command maximum area with minimum lift.

In lift irrigation mechanical devices like pumps, or electric motors and pumps are required to be installed for lifting water. Electrical pumps are generally provided for lifting water. Diesel pumping sets are also installed as standby. The provision of standby pumps is essential to cater forget lack of facilities for immediate replacement of defective pumping sets and to switch over to diesel set in case of power failure. Figure shows a typical pumping station at a lift canal.

Lift irrigation canals are essentially lined due to obvious advantages of a lined section and hence low pumping lift and greater area commanded. Lifted water is costly and transmission losses are required to be cut down to the minimum. Water surface slope is kept the minimum possible to command greater area with minimum lift. Escape is provided upstream of pumping station so that in the event of failure of pumping equipment, the supply reaching upstream is disposed off.

3.Working  dependent  on  operation  of machinery

5. Lift irrigation is a complex system and by and large costly.

2.Silt in water has manorial value

3.Lifting equipment is not involved

5.Simple and economical system of irrigation.

Groundwater is generally a more dependable source of irrigation than surface water and is free from seeds and plant organisms. The first cost of installation is however, high. The best water bearing stratum or aquifer is coarse gravel free from sand but such formation are rare to find. An aquifer is a saturated formation which creates ground water reservoir and yields sufficient quantity of water to wells or springs. These are made of unconsolidated formations like sand, gravel, fractured rocks.

It is termed as sub ŌĆ'surface irrigation, because in this type of irrigation, water does not we the soil surface. The underground water nourishes the plant roots by capillarity. It may be divided into the following two types:

Natural sub ŌĆ'irrigation: leakage water from channels, etc., goes underground, and during passage through the sub ŌĆ'soil, it may irrigate crops, sown on lower lands, by capillarity. Sometimes, leakage causes the water ŌĆ'table to rise up, which helps in irrigation of crops by capillarity. When underground irrigation is achieved, simply by natural processes, without any additional extra efforts, it is called natural sub ŌĆ'irrigation.

Artificial sub ŌĆ'irrigation: when a system of open jointed drains is artificially laid below the soil, so as to supply water to the crops by capillarity, then it is known as artificial sub ŌĆ'irrigation. It is a very costly process and hence, adopted in India on a very small scale. It may be recommended only in some special cases with favourable soil conditions and for cash crops of very high return. Sometimes, irrigation water may be intentionally collected in some ditches near the fields, the percolation water may then come up to the roots through capillarity.