A direct irrigation scheme which makes use of a weir or a barrage, as well as a storage irrigation scheme which makes use of a storage dam or a storage reservoir, necessitates the construction of a network of canals, as explained earlier. The entire system of main canals, branch canals, distributaries and minors is to be designed properly for a certain realistic value of peak discharge that must pass through them, so as to provide sufficient irrigation to the commanded areas. These canals have to be aligned and excavated either in alluvial soils or non ā'alluvial soils; depending upon which they are called alluvial canals or non ā'alluvial canals, as the case may be.

The soil which is formed by the agency of water, over a course of time, is called alluvial soil. A river before joining the sea, gets divided into a number of streams forming what is called as the River Delta. In the deltaic region, a river carries heavy charge of silt, which gets deposited on the adjoining lands, as and when the river overflows its banks during flood season. The process of silt deposition continues over long periods of time, resulting in the formation of a soil called Alluvial Soil. Hence the soil which is formed by continuous silt deposition is called alluvial soil. The area of alluvial soil is even and is having a flat surface slope. Hard foundations, are generally not available in this kind of soil. In prehistoric periods, the entire Indo ā'Gengetic Plain was perhaps a depression, and was filled up with constant silt deposition, resulting in the formation of an alluvial ā'soil region. The rivers flowing through such alluvial areas, have a tendency to shift their courses. The river bed consists of sand of considerable thickness, and is, therefore, permeable. Whenever, an irrigation structure is to be constructed on such a river, special precautions and design methods are to be adopted. Most of our North Indian rivers, which pass through alluvial soils, do pose these problems. The canals when excavated through such soils, are called Alluvial Canals. Canal irrigation (Direct irrigation using a weir or a barrage) is generally preferred in such areas as compared to storage irrigation (i.e. by using a dam). Alluvial soil is very fertile as it can absorb a fair percentage of rainfall and retain it in the substratum, making it highly productive.

Mountaineous regions may go on disintegrating over a period of time, resulting in the formation of a rocky plain area, called non ā'alluvial area. It has an uneven topography, and hard foundations are generally available. The rivers, passing through such areas, have no tendency to shift their courses, and they do not pose much problems for designing irrigation structures on them. Canals, passing through such areas are called Non ā'alluvial Canals. Major portion of Maharashtra State is non ā'alluvial. Storage irrigation is preferred to canal irrigation in this type of soil. Non ā'alluvial soils may be permeable or impermeable, but generally, they are non ā' permeable.

Irrigation canals can be aligned in any of the three ways: 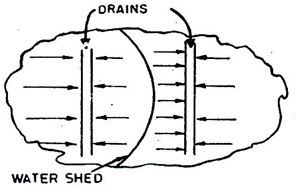 For canal system in plain areas, it is often necessary as well as advantageous to align all channels on the watersheds of the areas, they are designed to irrigate. The canal, which is aligned along any natural watershed, is called a watershed canal. From such a canal irrigation, water is taken out by gravity on either side of the canal, directly or through small irrigation channels.

Moreover, cross ā'drainage works are avoided, as the natural drainage will never cross a watershed, because all the drainage flows away from the watershed. Sometimes, watershed may have to be abandoned in order to bypass localities settled on the watershed. 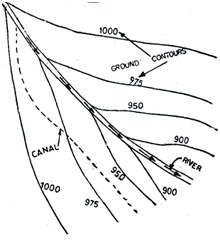 Figure: Alignment of a Contour canal

(ii) Contour Canal: The above arrangement of providing the canals along the watershed is not possible in hill areas. In the hills, the river flows in the valley, while the watershed or the ridge line may be hundred of metres above it. It becomes uneconomical to take the canal on top of such a ridge. The channel, in such cases, is generate sufficient flow velocities, are given to it.

The maximum designed slope that can be provided in the canal without generating excessive velocities, is generally less than the available country slope. The difference is accommodated by providing canal falls at suitable places. A contour channel irrigates only on one side, because the areas on the other side are higher.

As the drainage flow is always at right angles to the ground contours, such a channel would definitely have to cross drainage lines. Suitable cross drainage works are then provided.

Figure: Alignment of a Side Slope canal

(iii) Side Slope Canal: A side slope channel is that which is aligned at right angles to the contours, i.e. along the side slopes, as shown in figure.

In case of direct irrigation scheme, a weir or a barrage is constructed across the river, and water is headed up on the upstream side. The arrangement is known as Head Works or Diversion Head Works, and will be explained in details, a litter later, in chapter. Water is diverted into the main canal by means of a diversion weir. A head regulator is provided at the head of the main canal, so as to regulate the flow of water into the main canal.

In storage irrigation scheme, a dam is constructed across the river, thus forming a reservoir on the upstream side of the river. The water from this reservoir is taken into the main canal through the outlet sluices. There are generally two main canals, which off ā'take from the reservoir, called the Left Bank Canal and the Right Bank Canal, as shown in figure.

In certain storage irrigation schemes, commanded irrigation area may be far away from the dam site. In such cases, a separate head works consisting of a pick ā'up weir, is constructed across the river on the downstream side of the main dam, at a point where the commanded area begins. The main canal, in such a case, will off ā'take from the upstream side of the weir, just as in a normal diversion weir scheme. This arrangement is shown in figure. 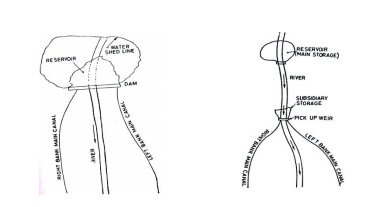 In both these irrigation scheme, when once the water reaches into the main canal, the problem left is to distribute this water into the fields. The purpose is achieved through a network of channels, as described below:

(a)  Main Canal (Head reach): The canal head works are generally situated in a valley, and the canal should mount the watershed in the shortest possible distance. The canal, in this reach, must be aligned very carefully and has to be generally excavated in deep cuttings below N.S.L. (natural surface level). Sometimes, it has to cross various drainage lines. Many a times, straight alignment has to be sacrificed in order to achieve a good site for cross drainage works.

(b)   Main Canal (Portion below head reach): Attempts are made to align the canal along the watershed and somewhat central to the commanded area. Sometimes, water ā'shed has to be sacrificed to bypass towns and villages, etc. Main canal is not required to do any irrigation.

(ii)           Branch Canals: When a main canal leaves the high ground and must, therefore, bifurcate into branches, covering the whole tract required to be irrigated, the canals in such portions are called Branch Canals. Very little irrigation is done from the branch canals. Attempts are made to align them along subsidiary water ā'sheds. Discharge in a branch channel, is generally, more than 30 cumecs.

(iii)        Distributaries: Smaller channels which take off from the branch canals and distribute their supply through outlets into minors or water courses, are called distributaries. They are aligned either as watershed channels or as side slope channels. Discharge in a distributaries is generally less than 30 cumecs. Minors: Sometimes, the country is such that the distance between the distributary outlet and the farmerās field is very long; say more called minors, are taken off from the distributaries, so as to supply water to the cultivators at the

point nearer to their fields. Discharge in a minor, is generally, less than 2.5 cumecs.

Attempts are made to align the channels straight as far as possible. But many a times, the curves become inescapable. Whenever, a curve is proposed, while aligning unlined channels, it should be as gentle as possible. A curve causes disturbance of flow and results in silting on the inside (i.e. convex side) and scouring on the outside (i.e. concave side).

Pitching is, therefore, sometimes proposed on the concave side, so as to avoid scouring. If the discharge is more, the curve should be more gentle and should, therefore, have more radius. The generally adopted minimum values or radii for different discharges are tabulated below in table.

Before we discuss the techniques, which are employed to determine the ādes for a channel, let us first of all, define certain important terms, with which we come across in the design of any irrigation canal system.

Gross Commanded Area (G.C.A): It is the total area, bounded within the irrigation boundary of a project, which can be economically irrigated without considering the limitation of the quantity of available water. It includes the cultivable as well as the non ā'cultivable area.