Three basic requirements of agricultural production are seed, and water. IN addition, fertilizers, insecticides, sunshine, suitable atmospheric temperature, and human labour are also needed. Of all these, water appears to be the most important requirement of agricultural production. The application of water to soil is essential for plant growth and it serves the following functions (1):

(i)                It supplies moisture to the soil essential for the germination of seeds, and chemical and bacteria processes during plant growth.

(ii)             It cools the soil and the surroundings thus making the environment more favourable for plant growth.

In several parts of the world, the moisture available in the root-zone soil, either from rain or from underground waters, may not be sufficient for the requirements of the plant life. This deficiency may be either for the entire crop season or for only part of the crop season. For optimum plant growth, therefore, it becomes necessary to make up the deficiency by adding water to the root-zone soil. This artificial application of water to land for supplementing the naturally available moisture in the root-zone soil for the purpose of agricultural production is termed irrigation.

Irrigation water delivered into the soil is always more than requirement of the crop for building plant tissues, evaporation, and transpiration. In some cases the soil may be naturally saturated with water or has more water than is required for healthy growth of the plant. This excess water is as harmful to the growth of the plant as lack of water during critical stages of the plant life. This excess water can be naturally disposed of only if the natural drainage facilities exist in or around the irrigated are. In the absence of natural drainage, the excess water has to be removed artificially. The artificial removal of the excess water is termed drainage which, in general, is complementary to irrigation.

To keep the optimum content of water in soil, irrigation supplied water to the land where water is deficient and drainage withdraws water from the land where water is in excess. The object of providing irrigation and drainage is to assist nature in maintaining moisture in the root zone soil within the range required for maximum agricultural production. Usefulness and importance of irrigation can be appreciated by the fact that without irrigation, it would have been impossible for India to have become self-sufficient in food with such huge population. 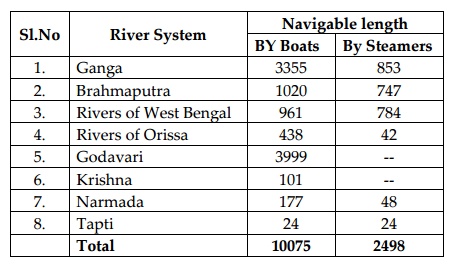 BY Boats    By Steamers

Inland water transport is the cheapest mode of transport of bulk cargo. In view of this, the following ten waterways have been identified for consideration to be declared as National Waterways (6).

Need of Irrigation in India

The rainfall in India is very erratic in its spatic as well as temporal variations. The average annual rainfall for India has been estimated at 1,143 mm which varies from 11,489 mm around cherrapunji in Assam (with the maximum one-day rainfall equal to 1040 mm) to 217 mm around Jaisalmer in Rajasthan. Besides, 75% to 90% of the annual rainfall occurs during 25 to 60 rainy days of the four monsoon months from June to September (2). In addition, there is also a large variation from year to year, the coefficient of variation being more than 20% for most parts of the 20% for most parts of the country (2).

Erratic behaviour of the south-west monsoon is the maintdroughtscause (Table 1.0) and floods. The recent proposal (Appendix-1) of the Government of India on interlinking of some major rivers of the country is aimed at (i) increasing the utilizable component

of the country’s water resources,problemsofshortages andexcesses(ii)ofwaterSol in some parts of the country. Table shows the values of the approximate probability of deficient rainfall (deficiency equal to or greater than 25 per cent of the normal) for different regions (8) Dependability of rainfall is thus rather low from the agriculture point of view and storage is essential to sustain crops during non-monsoon periods and also to provide water for irrigation during years of low rainfall. For a large part of any crop season, the evapotranspiration (i.e., the water ned of a crop) exceeds the available precipitation and irrigation is necessary to increase food

and fibre production. About 45 per cent of agricultural production in India is still dependent on natural precipitations. The need and important of irrigation in India can be appreciated from the mere fact that the country would need to produce meet the per capita requirement of 225 kg (i.e., about one-foruth of a tonne) per year for an estimated population of 1,231 million in the year 2030. 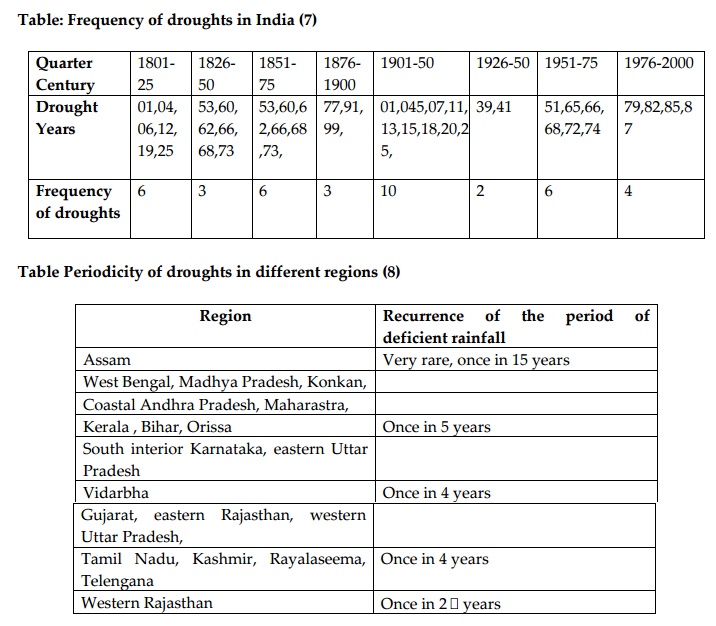 Table: Frequency of droughts in India (7)

Region        : Recurrence of the period of deficient rainfall

Western Rajasthan : Once in 2  years

In addition, the export of agricultural products earns a major part of foreign exchange. Because of vastly different climate in different parts of the country, a variety of crops are produced in India. The country exports basmati rice, cotton, fruits (mango, apple, grapes, banana etc), vegetables (potato, tomato etc). Flowers (rose etc.) and processed food products in order to earn

precious foreign exchange. Still further, about seventy percent of the country’s on i facilities in the country.

Development of Irrigation in India

Among Asian countries, India has the largest arable land which is close to 40 per cent of

Asia’s arable land (6). Only USA hasbeenmorepractised ara throughout the world since the early days of civilization. In India too, water conservation for

Assured water supply. For successful arming, availability of water in needed quantum and at right times is very essential.