Liabilities of an Auditor

A Chartered Accountant is associated with the valuable profession.

Liabilities of an Auditor:

Normally the liability of auditor based on the work done by him as professional accountant and carry out his work due care, caution and diligence. The nature of liabilities of an auditor is discussed below:

Negligence means breach of duty. An auditor is an agent of the shareholders. He has to perform his professional duties. He should take reasonable care and skill in the performance of his duties. If he fails to do so, liability for negligence arises. An auditor will be held liable if the client has suffered loss due to his negligence. It should be noted that an auditor will not be liable to compensate the loss or damage if his negligence is not proved.

The following are the liabilities of an auditor under the provisions of the Companies Act.

(1) Liability for Misstatements in the Prospectus [Sec.35]:

An auditor shall be held liable to compensate every person who subscribes for any shares or debentures of a company on the faith of the prospectus containing an untrue statement made by him as an expert. The auditor shall be liable to compensate him for any loss or damages sustained by him by reason of any untrue statement included therein. The auditor may escape from liability if he proves that:

·           The prospectus is issued without his knowledge or consent.

·           He withdrew his consent, in writing before delivery of the prospectus for registration.

·           He should have withdrawn his consent after issue of prospectus but before allotment of shares and reasonable public notice has given by him regarding this. 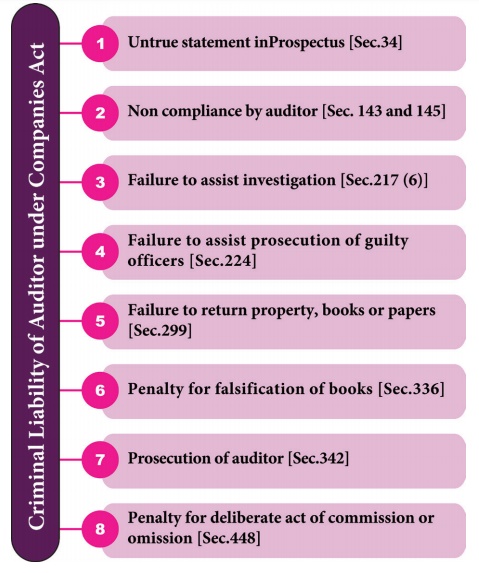 The auditor is liable when he authorizes a false or untrue prospectus. When a prospectus includes any untrue statement, every person who authorizes the issue of prospectus shall be imprisoned for a period of six months to ten years or with a fine, which may be three times the amount involved in the fraud or with both.

If the auditor does not comply regarding making his report or signing or authorization of any document and makes willful neglect on his part he shall be punishable with imprisonment upto one year or with fine not less than ₹. 25,000 extendable to ₹. 5,00,000.

WhenCentral Government appoints an Inspector to investigate the affairs of the company, it is the duty of the auditor to produce all books, documents and to provide assistance to the inspectors. If the auditor fails to do so he shall be punishable with imprisonment upto one year and with fine up to ₹.1,00,000.

An auditor is required to assist prosecution when Central Government takes any action against the report submitted by the Inspector. If he fails to do so, he is found guilty and is punishable.

When a company is wound up the auditor is supposed to be present and subject himself to a private examination by the court and is also liable to return to the court any property, books or papers relating to the company. If the auditor does not comply, he may be imprisoned.

An auditor when destroys, mutilates, alters or falsifies or secrets any books of account or document belonging to the company. He shall be punishable with imprisonment and also be liable to fine.

In the course of winding up of a company by the Tribunal, if it appears to the Tribunal that an auditor of the company has been guilty of an offence, it shall be the duty of the auditor to give all assistance in connection with the prosecution. If he fails to give assistance he shall be liable to fine not less than ₹ 25,000 extendable upto ₹.1,00,000.

8. Penalty for deliberate act of commission or omission [Sec.448]: If an auditor deliberately make a statement in any report, certificate, balance sheet, prospectus, etc which is false or which contains omission of material facts, he shall be punishable with imprisonment for a period of six months to ten years and fine not less than amount involved in fraud extendable to three times of such amount.

If any person issues or signs any certificate relating to any fact which such certificate is false, he is punishable as if he gave false evidence. According to Sec.197 of the Indian Penal Code, the auditor is similarly liable for falsification of any books, materials, papers that belongs to the company.

·           A person who induces another person to make and deliver to the Income Tax authorities a false account, statement or declaration relating to any income chargeable to tax which he knows to be false, he shall be liable to fine and imprisonment of three months to three years. An auditor may also be charged in case of wrong certification of account.

·           A Chartered Accountant can represent his clients before the Income Tax Authorities. However, if he is guilty of misconduct he can be disqualified from practicing.

There are number of persons who rely upon the financial statements audited by the auditor and enter into transactions with the company without further enquiry viz. creditors, bankers, tax authorities, prospective shareholders, etc.

It has been held in the court that auditor is not liable to third parties, as there is no contract between auditor and third parties. He owes no duty towards them.

The third parties can hold the auditor liable, if there is fraud on the part of auditor even if there is no contractual relationship between auditor and third parties. In certain cases negligence of auditor may amount to fraud for which he may be held liable to third parties. But it must be proved that auditor did not act honestly and he knew about it.