Laticiferous tissue: Latex is a white, yellow or colourless liquidCarbohydrates, protein, gums, and fats etc. are mixed in Latex, Latex is found in various plants like;-

When one or more kinds of tissues are united and together perform a similar function, then it is known as tissue system. They are classified into three types namely:

i) Epidermal Tissue System: - This tissue system makes the outer cover ofplant organs like, roots stems, branches, leaves, fruits. etc. Typically it consists of a closely arranged single layer of parenchymatous cells. There may have unicellular or multicellular hairs.

Functions: To give protection to the internal portion of the plant organ.

Theses are the main bulk of tissues of roots and stems. The ground tissue is differentiated into outer cortical region and inner medulla or pith region. In dicot stem the cortical region is ususlly subdivided into three zones namely:- 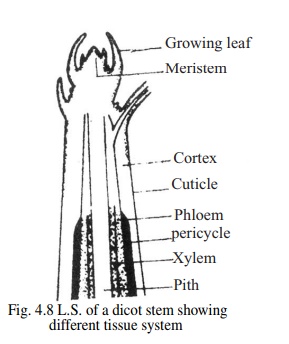 Medulla and Medullary Raysencircled by, the Pericycle form the central Pith.

Functions : Functions of this tissuesystem are to give mechanical stregth to the stem and to store food materials. 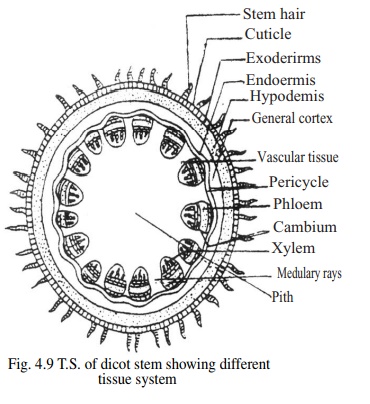 Xylem and phloem, These tissuesare embedded in the ground tissues. In dicotyledonous stems xylem and phloem lie side by side on the same radius and between them there is akind of Meristamatic tissue named Cambium. Phloem tissue lies towards the periphery and xylem toward center of the stem.

Arrangement of different tissue system of a dicot stem is shown In longitudinal (I.S.) and transverse section (T.S) [Gig: -4.8 & 4.9]

Give mechanical strength to the stem, and

Storage of food where necessary