John Rawls is considered as one of the finest political philosophers of 20th century.

John Rawls is considered as one of the finest political philosophers of 20th century. He developed the theory of Justice based on the paradigm called Justice as Fairness. His framework treats all personal attributes as being morally arbitrary; therefore Justice for him demands equality. For him ‘all social values including liberty, opportunity, income, wealth, self-respect are to be distributed equally. In other words, injustice is ‘simply inequalities that not to the benefit of all’. If/when any action/ attribute of an individual that does not benefit all actually signifies inequality and unfair/unjust character of a society. This perspective compels us to have a more comprehensive understanding of Justice itself. Let’s see what he says about Justice. 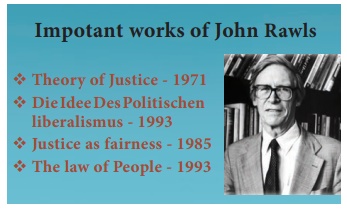 Just think of a moment when you are asked to imagine a new society. It is obvious many would construct a society in which they would place themselves with all power/authority and privileges. Do you think that anyone will imagine themselves in a pitiable situation? Most likely no one would do that? Why? It is not possible also to imagine people sacrificing their personal ambitions and self-interest in a new society. People will immediately think of their children and their grand children’s welfare. Why would people sacrifice the well-being of themselves and their children? You may wonder how this simple question would be the basis for John Rawls theory of Justice. There are strong foundations for this simple question and its plausible answer.

John Rawls tries to find out an answer for this question. He offers a hypothetical situation for us to imagine. Yes, let’s imagine ourselves to be in a situation in which we have to make decisions about how society should be organized although we do not know which position we would ourselves occupy in that society. We may not know which family we would be born in and similarly no knowledge about our caste, class, religion, gender and region etc. Here Rawls argues that if we do not know where we will be and what options would be available for us in the future society, we will most likely support a decision on the rules and organizations of that future society which would be fair for all members. When we are quite uncertain about our future, we like to facilitate an order in which all members would get a fair deal.

This moment Rawls describes as thinking under a ‘Veil of Ignorance’. We are ignorant about our possible position and status in society; each person would decide the way they generally do – trying to have optimum self interest in the new society. But surprisingly no one knows exactly who he/she would be and what is going to benefit him/her. Each one of us will imagine the future society from the point of view of the worst off. We usually tend to place ourselves with all privileges and entitlements. Now in the new imagined society, we really do not know where and what we will be. In such a situation, what strikes people is, what if we unfortunately are born in a disadvantaged section of the society with a few or very minimal opportunities? Suddenly, we try to create new system in which even persons from the most marginalized sections get reasonable opportunities and resources.

Even though this is a moment of departure, it is not so easy to erase our identities and think/imagine oneself under a veil of ignorance. Similarly, it is not easy to expect people to be self sacrificing and share their good future with unknown people. However, the merit of the ‘veil of ignorance’ framework is that it expects people to just be their usual rational selves; they are expected to think for themselves and choose what they regard to be in their interest.

But what is more important here is that by wearing an imagined veil of ignorance is the first step towards arriving at a system of fair laws and policies. It tries to latch its trust in the human agency of rationality among people in contemporary world. The ethics of reason will create, for Rawls, a new political structure in which people will think of polices not to optimize their self interests but rather envisage society as a whole. This comprehensive and holistic perspective embedded in Rawls’ framework makes it highly pertinent while debating on Justice. That is to say, it would be in the interest of all sections of the society as a whole must benefit from the policies and rules; not for an exclusive section of a society. Such fairness would be the outcome of rational action not benevolence or generosity. John Rawls theory premises upon the arrival of quintessential modern, rational beings to realize the spirit of Justice in our society; a society like ours wherein non-rational identities and sentiments play a major role in organizing the society, may have to toil to truly understand the spirit of Justice as emulated by John Rawls.