Isoniazid is the most active drug for the treatment of tuberculosis caused by susceptible strains.

Isoniazid is the most active drug for the treatment of tuberculosis caused by susceptible strains. It is a small molecule (MW 137) that is freely soluble in water. The structural similarity to pyridoxine is shown below. 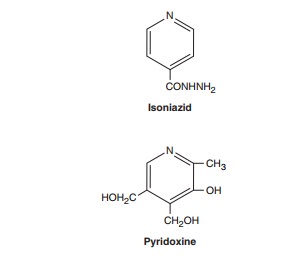 Mechanism of Action & Basis of Resistance

Isoniazid inhibits synthesis of mycolic acids, which are essential components of mycobacterial cell walls. Isoniazid is a prodrug that is activated by KatG, the mycobacterial catalase-peroxidase. The activated form of isoniazid forms a covalent complex with an acyl carrier protein (AcpM) and KasA, a beta-ketoacyl carrier protein synthetase, which blocks mycolic acid synthesis and kills the cell. Resistance to isoniazid is associated with mutations resulting in overexpression of inhA, which encodes an NADH-dependent acyl carrier protein reductase; mutation or deletion of the katG gene; promoter mutations resulting in overexpression of ahpC, a puta-tive virulence gene involved in protection of the cell from oxida-tive stress; and mutations in kasA. Overproducers of inhA express low-level isoniazid resistance and cross-resistance to ethionamide. KatG mutants express high-level isoniazid resistance and often arenot cross-resistant to ethionamide.

Drug-resistant mutants are normally present in susceptible mycobacterial populations at about 1 bacillus in 106. Since tubercu-lous lesions often contain more than 108 tubercle bacilli, resistant mutants are readily selected if isoniazid or any other drug is given as a single agent. The use of two independently acting drugs in com-bination is much more effective. The probability that a bacillus is initially resistant to both drugs is approximately 1 in 106× 106, or 1 in 1012, several orders of magnitude greater than the number of infecting organisms. Thus, at least two (or more in certain cases) active agents should always be used to treat active tuberculosis to prevent emergence of resistance during therapy.

Isoniazid is readily absorbed from the gastrointestinal tract. A 300-mg oral dose (5 mg/kg in children) achieves peak plasma concentrations of 3–5 mcg/mL within 1–2 hours. Isoniazid dif-fuses readily into all body fluids and tissues. The concentration in the central nervous system and cerebrospinal fluid ranges between 20% and 100% of simultaneous serum concentrations.Metabolism of isoniazid, especially acetylation by liver N-acetyltransferase, is genetically determined .The average plasma concentration of isoniazid in rapid acetylators is about one third to one half of that in slow acetylators, and aver-age half-lives are less than 1 hour and 3 hours, respectively. More rapid clearance of isoniazid by rapid acetylators is usually of no therapeutic consequence when appropriate doses are administered daily, but subtherapeutic concentrations may occur if drug is administered as a once-weekly dose or if there is malabsorption.

Isoniazid metabolites and a small amount of unchanged drug are excreted, mainly in the urine. The dose need not be adjusted in renal failure. Dose adjustment is not well defined in patients with severe preexisting hepatic insufficiency (isoniazid is contrain-dicated if it is the cause of the hepatitis) and should be guided by serum concentrations if a reduction in dose is contemplated.

The typical dosage of isoniazid is 5 mg/kg/d; a typical adult dose is 300 mg given once daily. Up to 10 mg/kg/d may be used for serious infections or if malabsorption is a problem. A 15 mg/kg dose, or 900 mg, may be used in a twice-weekly dosing regimen in combination with a second antituberculous agent (eg, rifampin 600 mg). Pyridoxine, 25–50 mg/d, is recommended for those with conditions predisposing to neuropathy, an adverse effect of isoniazid. Isoniazid is usually given by mouth but can be given parenterally in the same dosage.

Isoniazid as a single agent is also indicated for treatment of latent tuberculosis. The dosage is 300 mg/d (5 mg/kg/d) or 900 mg twice weekly for 9 months.

The incidence and severity of untoward reactions to isoniazid are related to dosage and duration of administration.

Isoniazid-induced hepatitis is the most common major toxic effect. This is distinct from the minor increases in liver aminotransferases (up to three or four times normal), which do not require cessation of the drug and which are seen in 10–20% of patients, who usu-ally are asymptomatic. Clinical hepatitis with loss of appetite, nausea, vomiting, jaundice, and right upper quadrant pain occurs in 1% of isoniazid recipients and can be fatal, particularly if the drug is not discontinued promptly. There is histologic evidence of hepatocellular damage and necrosis. The risk of hepatitis depends on age. It occurs rarely under age 20, in 0.3% of those aged 21–35, 1.2% of those aged 36–50, and 2.3% for those aged 50 and above. The risk of hepatitis is greater in individuals with alco-hol dependence and possibly during pregnancy and the postpar-tum period. Development of isoniazid hepatitis contraindicates further use of the drug.Peripheral neuropathy is observed in 10–20% of patients given dosages greater than 5 mg/kg/d, but it is infrequently seen with the standard 300-mg adult dose. Peripheral neuropathy is more likely to occur in slow acetylators and patients with predisposing conditions such as malnutrition, alcoholism, diabetes, AIDS, and uremia. Neuropathy is due to a relative pyridoxine deficiency. Isoniazid promotes excretion of pyridoxine, and this toxicity is readily reversed by administration of pyridoxine in a dosage as low as 10 mg/d. Central nervous system toxicity, which is less com-mon, includes memory loss, psychosis, and seizures. These effects may also respond to pyridoxine.

Miscellaneous other reactions include hematologic abnormali-ties, provocation of pyridoxine deficiency anemia, tinnitus, and gastrointestinal discomfort. Isoniazid can reduce the metabolism of phenytoin, increasing its blood level and toxicity.