Isoniazid (INH), rifampin (or other rifamycin), pyrazinamide, ethambutol, and streptomycin are the five first-line agents fortreatment of tuberculosis.

Isoniazid (INH), rifampin (or other rifamycin), pyrazinamide, ethambutol, and streptomycin are the five first-line agents fortreatment of tuberculosis (Table 47–1). Isoniazid and rifampin are the most active drugs. An isoniazid-rifampin combination admin-istered for 9 months will cure 95–98% of cases of tuberculosis caused by susceptible strains. The addition of pyrazinamide to an isoniazid-rifampin combination for the first 2 months allows the total duration of therapy to be reduced to 6 months without loss of efficacy (Table 47–2). In practice, therapy is initiated with a four-drug regimen of isoniazid, rifampin, and pyrazinamide plus either ethambutol or streptomycin until susceptibility of the clinical isolate has been determined. Neither ethambutol nor streptomycin adds substantially to the overall activity of the regimen (ie, the duration of treatment cannot be further reduced if either drug is used), but they provide additional coverage if the isolate proves to be resistant to isoniazid, rifampin, or both. The prevalence of isoniazid resistance among clinical isolates in the United States is approximately 10%. Prevalence of resistance to both isoniazid and rifampin (ie, multidrug resistance) is about 3%. 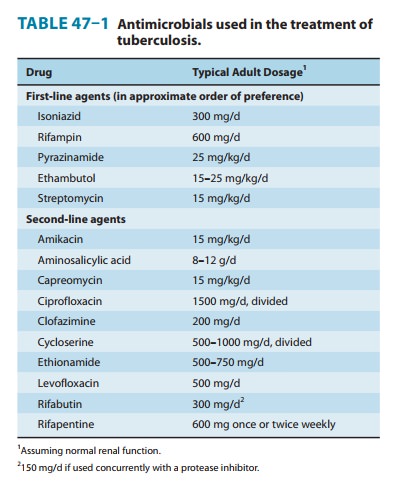 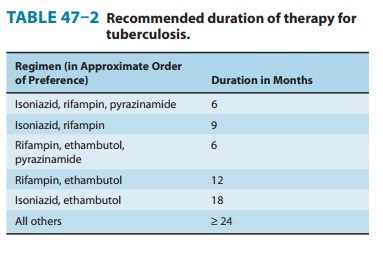